Straight out of the Mountain Safety Research labs in Seattle the Freelite 1p tent builds on the popularity of the Hubba NX series but wraps it up in a lighter package.

Best for...
Ultralight minimalists looking for a liveable shelter
Price
£395
Value
8
Quality
9
Performance
7
Comfort
8
Overall Score
8
+
Spacious for a 1p tent
‐
Floor material is too thin for our liking
ultralightoutdoorgear.co.uk

The Freelite 1 used to be identical in footprint, shape and height to the ever popular Hubba NX. Being essentially the lightweight version of the Hubba NX that might be what you expect, but somewhat bafflingly the Freelite 1 now features a larger footprint, and more headroom than the Hubba thanks to a 2022 update.

An extra 5cm of length, 8cm width and 9cm of headroom in the sleeping area is not to be sniffed at in the world of 1-man backpacking tents. So what gives? How does the Freelite 1 manage a lower weight than it's brother Hubba?

The Freelite utilises a lighter pole design and does away with one of the 'Y-shaped' ends, instead opting for a single straight pole which terminates centrally. This isn't ever going to be as strong as the set up on the Hubba NX, and pitched side by side the Freelite moves around more in the wind. Having said that it's still a commendably sturdy shelter that we have the utmost confidence in when pitching on a mountainside far from civilisation. 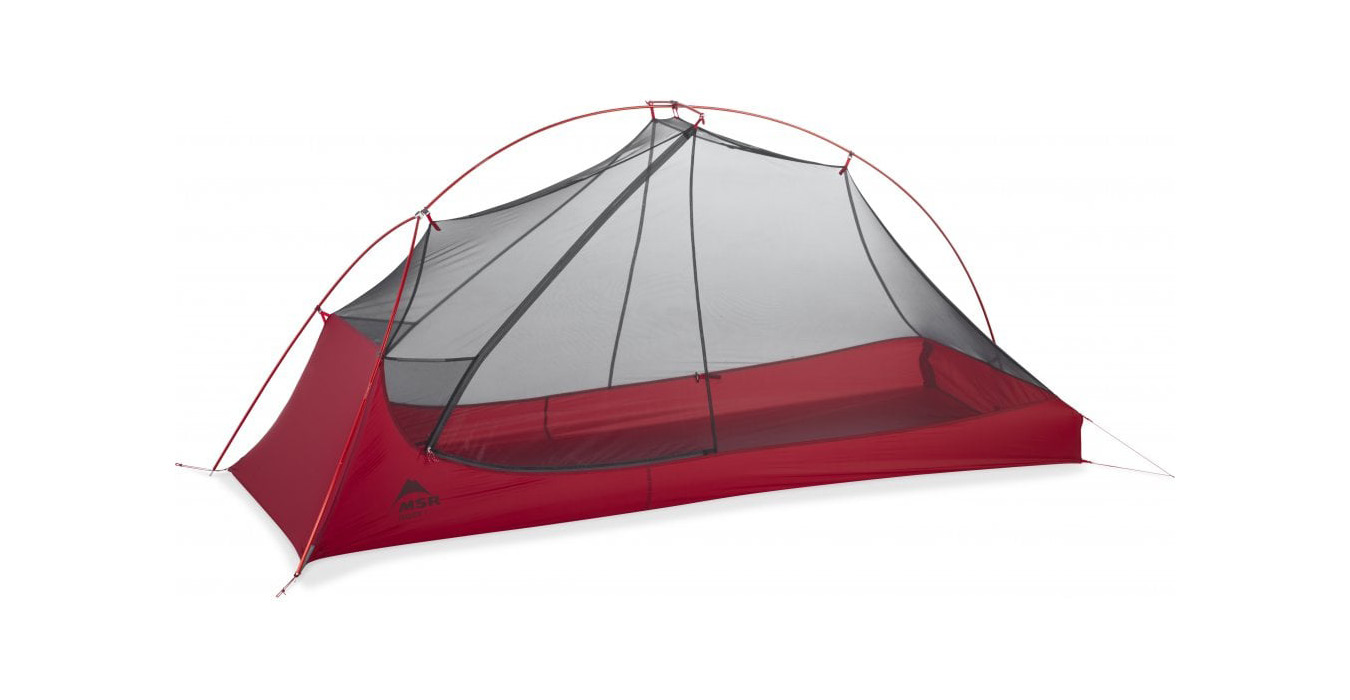 Other weight saving measures include one less plastic inner suspending c-clip (yes, every little bit does count!). The obvious way to save weight in a tent though is through material efficiency, and the Freelite takes that to the extreme. The flysheet get's a serious undercut at one end, with the inner relied upon to fend off driving rain. The Freelite gets a 15D flysheet and floor Vs the 20D flysheet and 30D floor of the Hubba NX ('D' means denier, a measure of the yarn weight). The big concern here is the floor material, which at 15D saves weight over the 30D equivalent, but conversely, is very thin for a piece of material that could see a lot of abrasion and tensile pressures making it susceptible to puncture tears. We'd recommend using the Freelite with a footprint, or at the very least carrying some decent repair tape with you in case of emergency.

Despite a larger internal footprint than the NX, the vestibule of the Freelite has been reduced in size by some 10cm. This has the effect of making the inside seem smaller somehow, as the distance from your bed to the outer wall can easily be seen through the swathes of mesh that clad the inner. It reduces storage space too, having said that we can still fit a 48-litre backpack and boots into the Freelite vestibule so there's plenty of space for the essentials!

These compromises have taken the overall weight of the Freelite down to an impressive 890g, complete with pegs and guylines, a fantastic weight for such a liveable tent. That's a saving of 400g over the Hubba NX and in the world of ultralight outdoor gear that's a big number.

With the Freelite 1 available for £50 less than the Hubba NX (based on RRP) it makes a compelling choice as your next ultralight backpacking tent.

It doesn't offer the same protection as the Hubba NX, and won't be as durable, but is arguably now the better tent thanks to the recent updates.