Walk through any busy family campsite and you’ll see a range of tents similar to the Valencia II Air 450 and there’s a reason for that – this is possibly the most practical style of tent for family camping trips.

The Valencia II Air pitches in a realistic 25 minutes, not bad for a large tent. There are no less than five Airbeams to inflate which takes a bit of effort. The included pump works well but we experienced a bit of leaking from the attachment point to the valve, we could still inflate but lost a bit of air along the way. With an open and closed position, the Airbeams are easier to fully deflate when packing away, more on that later.

Pitching is like any other conventional tent, peg down the base and guy lines, the only addition to this on the Valencia II Air is a covered porch area which goes up using a lightweight shock corded pole.

All in all, we were happy with the pitching process, nothing was too frustrating or complex making setup at the campsite as painless as you can hope for.

Great airflow is achieved throughout the Valencia Air II thanks to upper and lower vents into the bedroom area and a large lower vent one side of the living area and big door the other. The bedroom pod benefits from mesh covered vents in the inner doors, front and back. 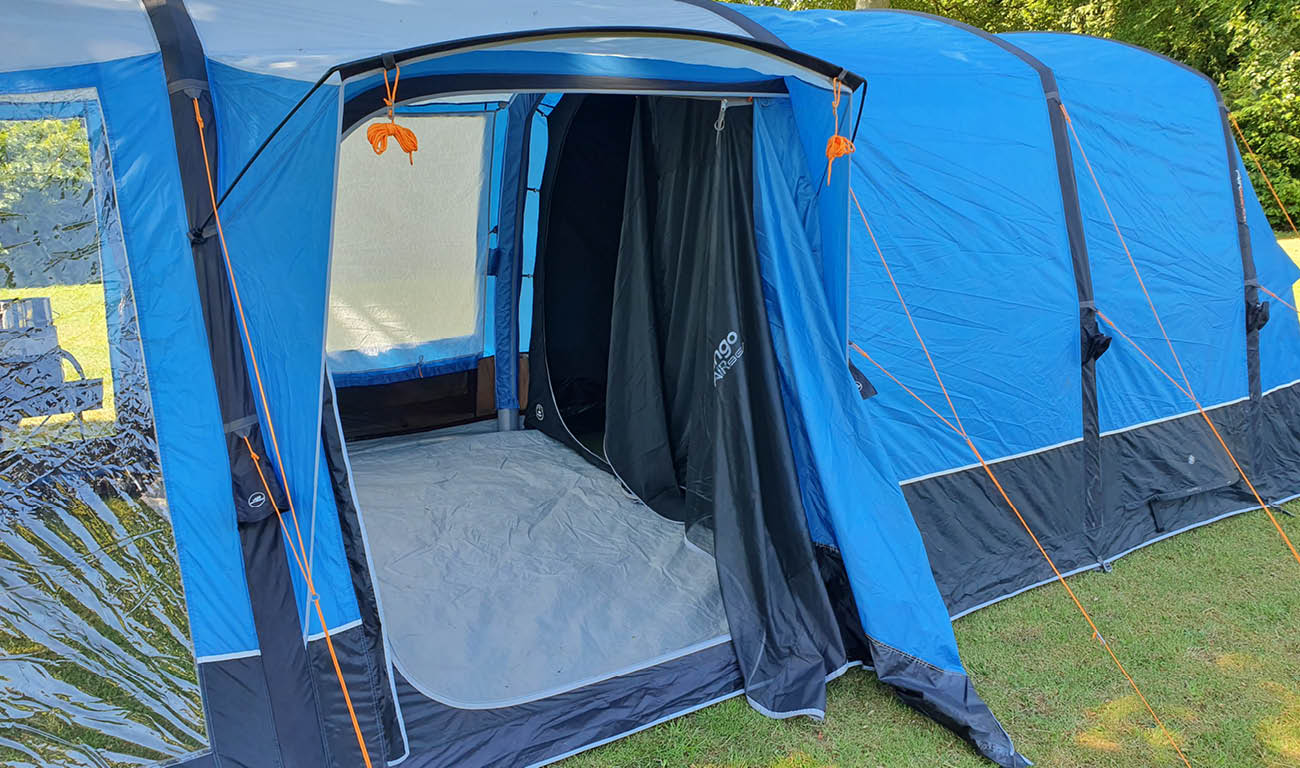 Back doors in a tent bedroom? The Valencia Air II has a clever trick up its sleeve, both bedrooms have access to a rear storage space via a back door. This could even be used for a Porta Potti - handy for late night toilet visits with kids. 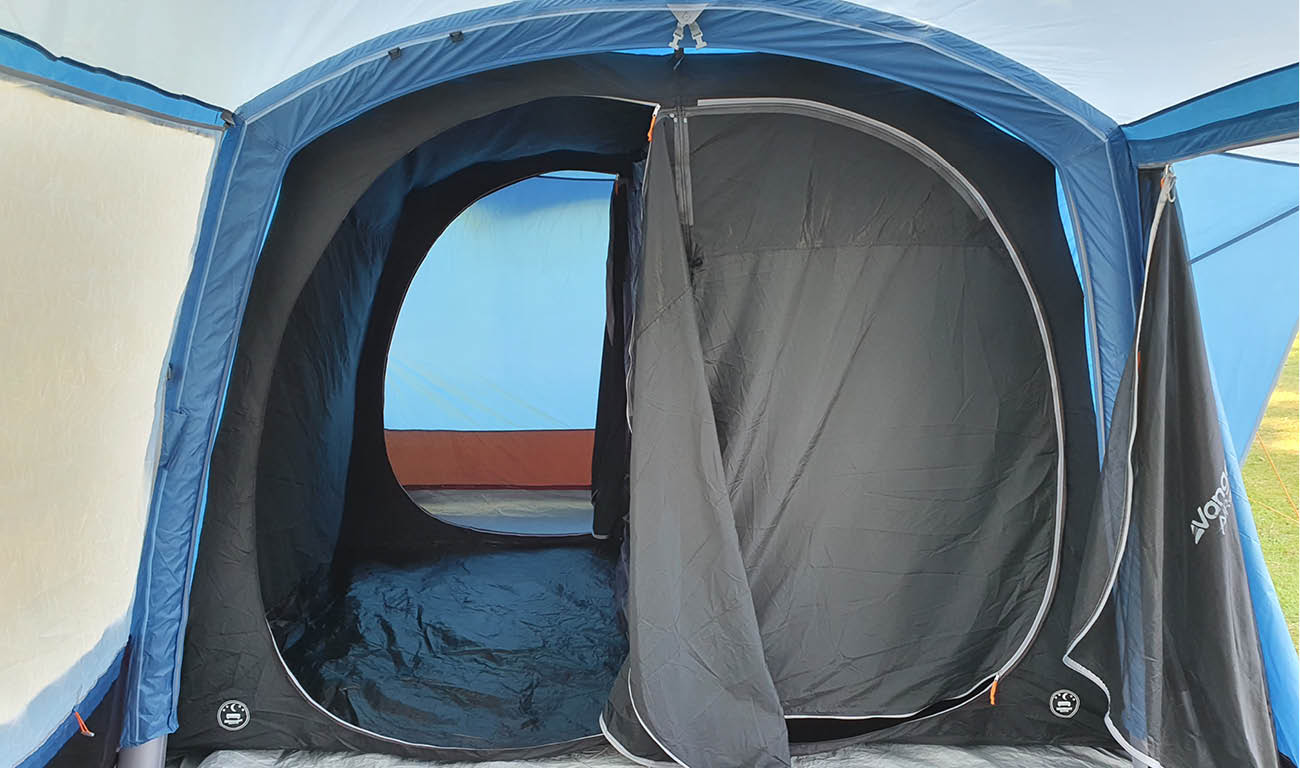 Vango’s version of blackout bedrooms are called ‘Midnight bedrooms’ and we were pleasantly surprised by how well they work, blocking out enough light to sleep even during the day. A divider splits the bedrooms into two 140cm wide spaces, just enough for a double camp bed, or it can be completely removed to make one large bedroom for two. There are four deep storage pockets along each wall of the bedrooms but unfortunately no storage pockets in the main living area of the tent.

Having a big window one side and large door the other, the living space is bright and airy, and you get standing height right to the edges, even if you’re over 6ft. The space isn’t massive in the Valencia Air II, but this can be easily extended into the front vestibule. Unzip and pin back the full width dividing door and the space practically doubles in size. You lose the sewn in groundsheet in the front section, but we like this as we use it for setting up a camp kitchen and don’t mind dropping stuff on the floor! At the end of the day, you can shut off the mess and relax in the main living space. 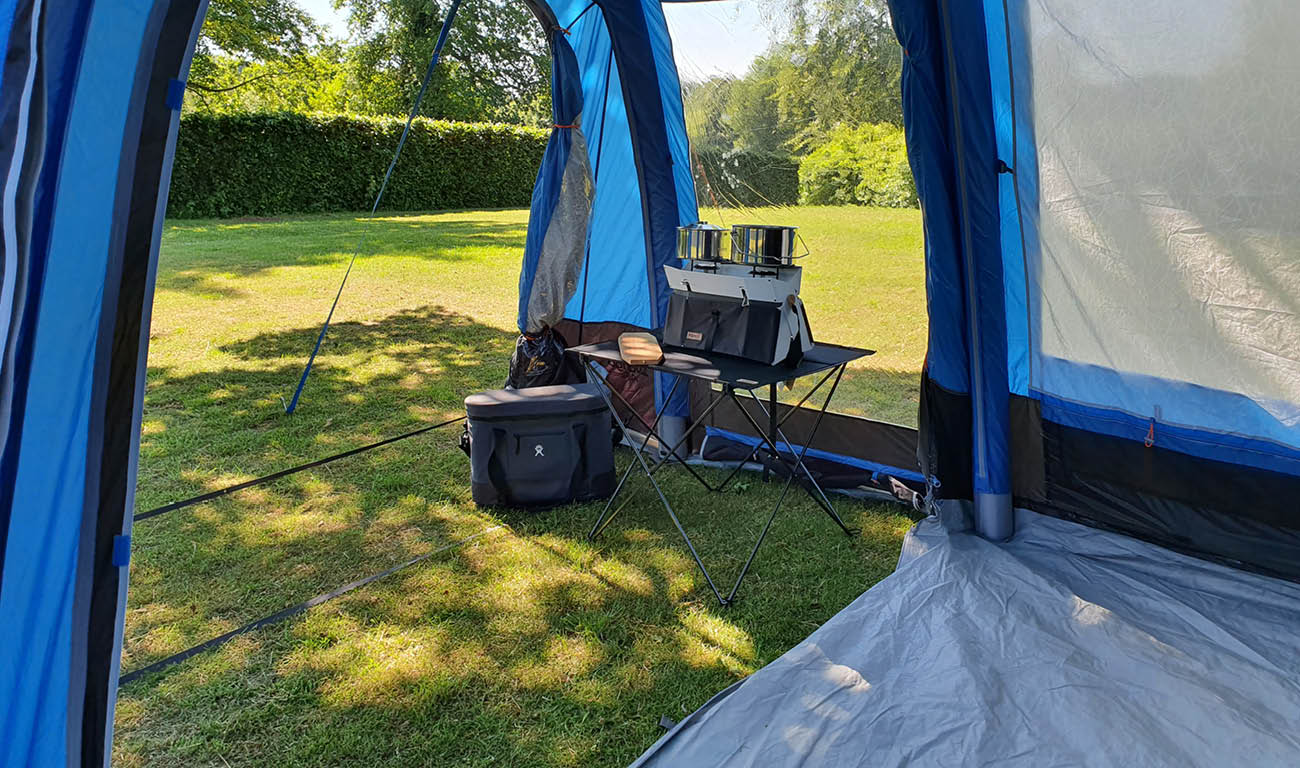 The very front of the tent opens right up too, via a door with a further two large windows. With the side, dividing and front door open the Valencia Air II is a wonderfully airy, but still useful space on a hot summer’s day.

After enjoying camping in the Valencia Air II, you might dread packing it away but fear not, the process isn’t as painful as it could be. As mentioned previously, the Airbeams can be locked in the open position so it’s easy to roll all the air out of them. Although as unwieldy as other large tents to package neatly the bag is mercifully large, with extra material at the opening making it easy to squeeze the tent in. In total (not counting packing up stuff inside) it takes around 15 minutes to fully pack the tent down, not bad. Our only complaint about this process is the material which the bag is made of which isn’t thick enough so is easy to damage.

For this size and quality of tent the price is reasonable. We really enjoyed using the Valencia II Air and it feels like it is built to last, making it a worthwhile investment for family camping.

READ NEXT: 6 of the Best Glamping Sites in the UK