Heading out into the open ocean in a small kayak may seem like an exhilarating adventure, but it also puts you at the mercy of the elements. Safety is of paramount importance, so here are some important tips and our selection of the best places to go.

The British Isles has a coastline to rival the most spectacular on the planet and there’s no better way to explore its wonderful geography and nature than by kayak. Rob McKinlay dips his paddle

The Eskimos of North America and Greenland who, some 5,000 years ago, built a craft on which to negotiate the seas while hunting for seals, walruses and other edible marine creatures. These vessels were made of wood, covered in mammal skins and are the earliest recorded examples of the sea kayak. The materials used barely changed until about 50 years ago, when fibreglass became popular.

Thanks also go to... Chris at Clearwater Paddling (clearwaterpaddling.com) for his expert help with this article.

In the same boat?

There is more than one type of kayak:

Single – kayak designed for one paddler; shorter than a double

Sea kayak  – tend to be narrower with more ‘v’-shaped hull, which helps with tacking upwind 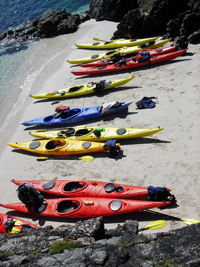 Coaming – rim of a cockpit, which has a lip onto which a kayaker’s spray deck/skirt fits, to keep him/her dry

Put In – getting into the water

Seam – one-inch-wide line around the middle of the kayak where the deck and hull are joined together, usually a different colour

Spray Deck/Skirt – fitted, waterproof fabric that creates a seal between kayaker and coaming, keeping water out 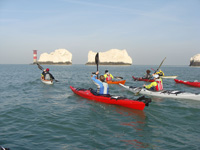 Some of the top spots to go sea kayaking in Britain & Ireland:

This undisturbed corner of Scotland offers the best (and most peaceful) sea kayaking in the country – as good as anywhere in the world – and is a haven for wildlife, including seals, otters and golden eagles.

Paddle alongside towering sea cliffs and into caves along this thrilling stretch of coastline, making the most of sheltered beaches, remote offshore islands and clean, Atlantic water.

From the rugged, wave-sculpted coastline of the Donegal Islands to the spectacular coastal architecture of County Kerry and the coral beaches of the Connemara, Ireland’s West Coast is ripe for exploration.

The Cornish coastline is a natural paddling playground, offering fantastic wildlife and an incredible diversity of environments, which means whatever your level, the right conditions can usually be found.

Scotland’s inner islands and sea lochs provide the stunning, and often sheltered, backdrop for some exciting and beautiful paddling for all abilities.  clearwaterpaddling.com

And in the World…