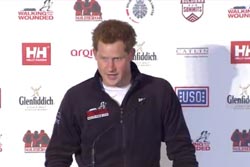 Price Harry has announced an expedition to the South Pole for wounded servicemen. Three teams, one from the UK, one from the US and one from Commonwealth countries including Canada and Australia, will attempt to trek to the Pole – and be the first ones there.

The prince hopes to join the British team for part of the South Pole Allied Challenge, which is being organised by the charity Walking with the Wounded. The charity has previously run treks to the North Pole and an ascent attempt on Everest.

Announcing the team members, Prince Harry outlined the purpose of the expedition: ‘The format may be different to previous Walking with the Wounded challenges, but the aim remains the same: to enable our wounded to do what they and all our service men and women do better than anyone I’ve ever met – to meet a challenge head on and overcome it, and to inspire others to do the same.

‘The extreme mental and physical challenge of trekking to the South Pole requires courage, physical strength, endurance and comradeship,’ he said. ‘But there’s something else – something bigger than that that continues to draw me back to this charity, and these people, time and again. It’s toughness of mind, an unquenchable spirit that simply refuses to say “I am beaten”.

‘All that remains for me to say to the Commonwealth and the US teams is that as a member of the British team I will have a brew on for you when you join us at the South Pole.’

The British team consists of Guy Disney and Kate Philp, who are both lower leg amputees; Ibrar Ali, a right arm amputee, and Duncan Slater, a double lower leg amputee. All were injured in Afghanistan between 2007 and 2009.

They will trek 335km across Antarctica and experience temperatures as low as -40C. The expedition starts in November.