A hidden gem region of Spain, Asturias is green Spain at its best - an unspoilt paradise for nature lovers, whether on two feet or two wheels.

Asturias in northern Spain is an area that seems designed to be explored by bike. From the gentle paths of the Vías Verdes to the routes that will get the most out of mountain bikes and test your legs to their limit on the prestigious tough mountain ramps, cycling in Asturias offers routes and possibilities for all kinds of rider.

Home to some of the toughest and most iconic stages of Spain's annual Vuelta bike race, Asturias has many long-distance routes that are ideal to be explored on bikes, including the Way of St James and the Senda Costera coastal path.

And for MTB riders, Asturias offers hundreds of possible trails of varying length, duration and levels of difficulty - you can choose to discover the nature, history, gastronomy and villages on a relaxed ride, or challenge yourself by tackling demanding gradients and steep descents, crowning mountain passes and hills that have been strategic passes throughout history, listening to the silence of the forests, and accessing unsurpassed scenic viewpoints. 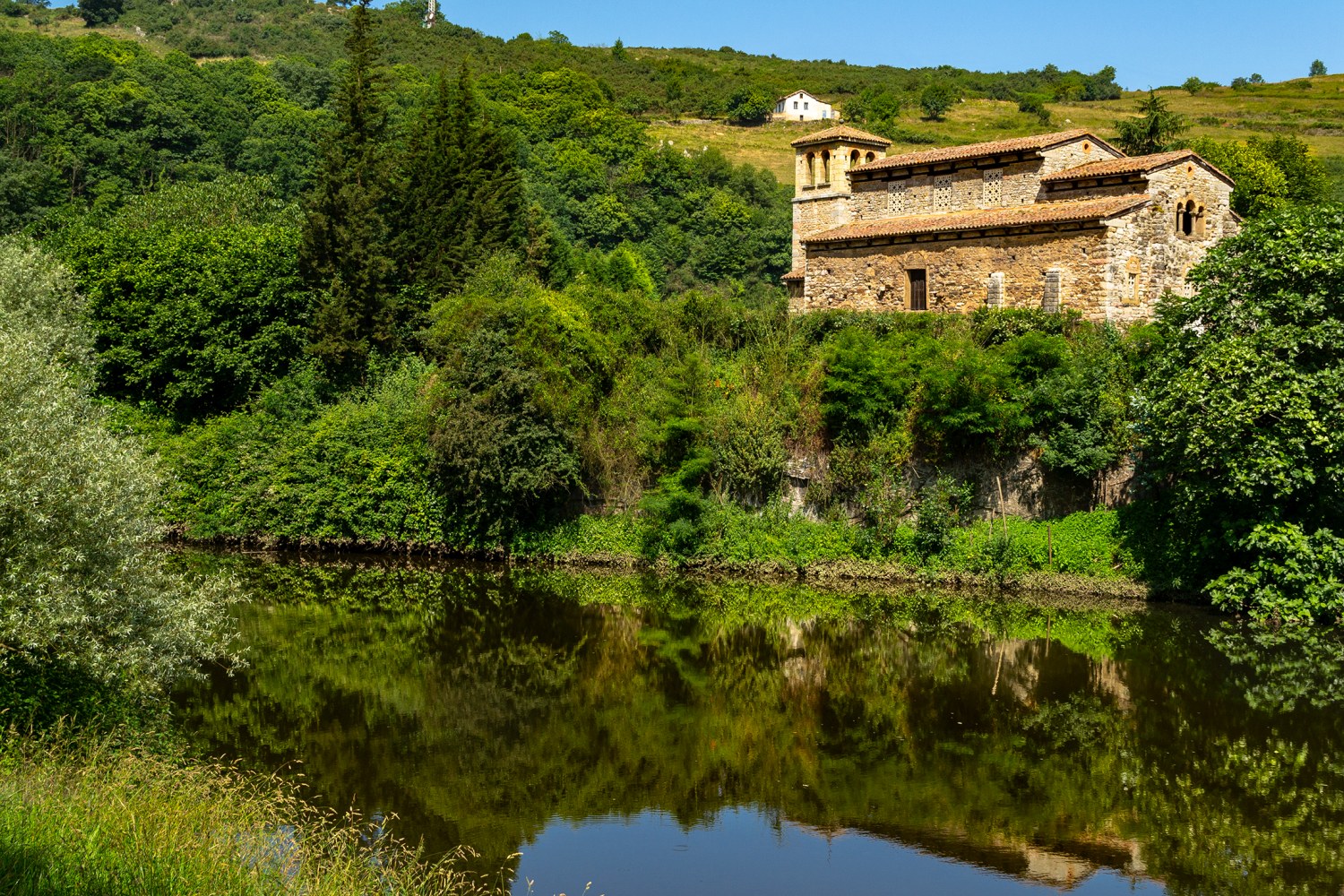 A world away from the Mediterranean Spain of crowded Costas and high-rise hotels, this miraculously protected region is tucked away on the northwest edge of Spain, its 400km of unspoilt coastline home to some of the most beautiful beaches in Spain, along the Atlantic in the Cantabrian Sea.

Highlights of the Asturias region

Asturias has one of Europe’s most extensive environmental preservation schemes, resulting in having seven Biosphere Reserves, including the Picos de Europa - Spain's first national park and home of the beautiful Covadonga lakes - and more than a third of the region's landscapes are protected areas. All of this in an area roughly half the size of South East England.

Asturias is the last refuge in Western Europe for the brown bear. Wolves, too, still wander the spectacular valleys of the Cantabrian mountains amongst a wide variety of wild fauna in some of the most important forests in Europe, such as the Muniellos oak forest and the famous Peloño forest - a must-visit in Autumn for an unforgettable colour show. 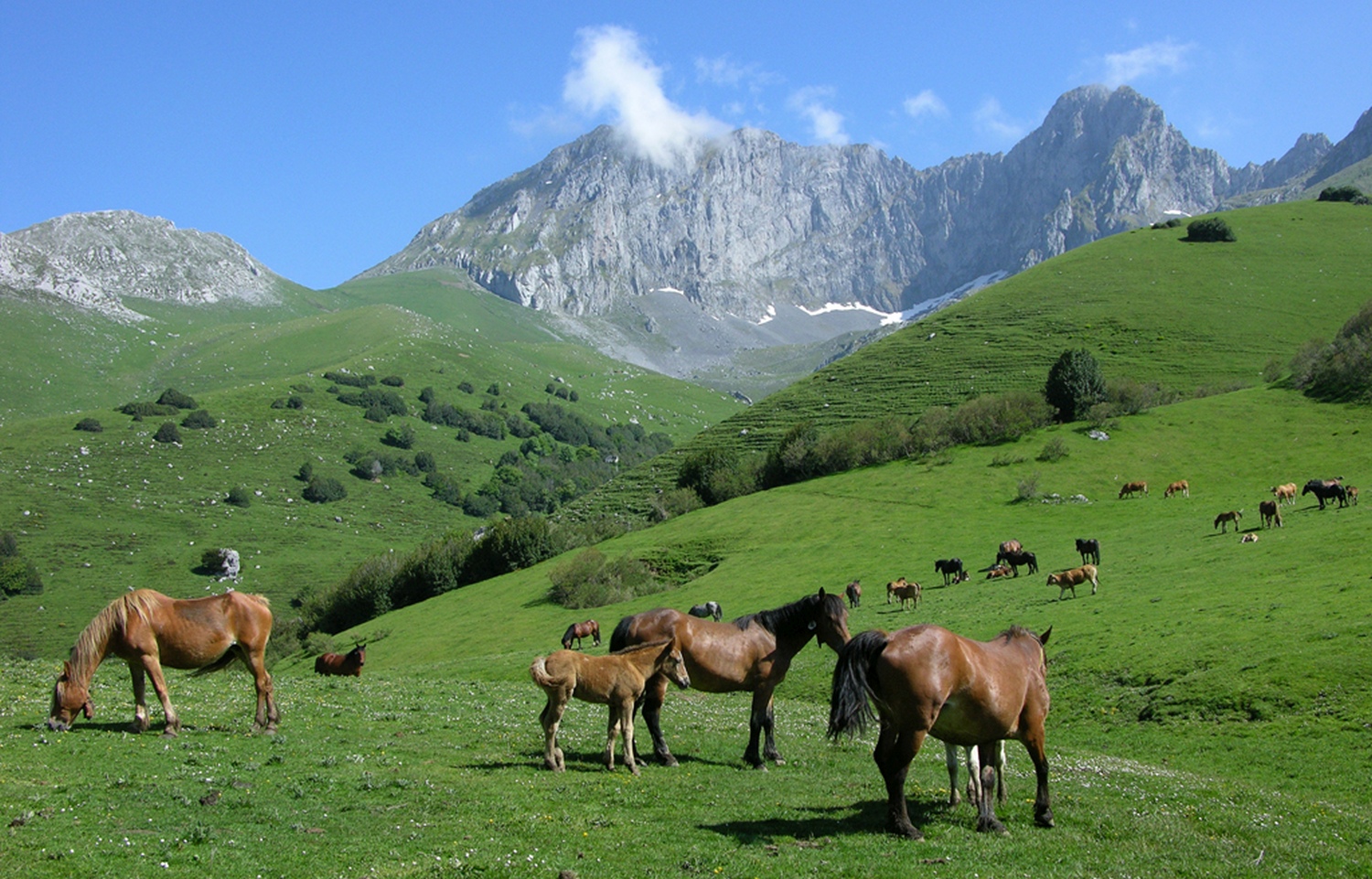 The brown bear's habitat extends up to Somiedo Natural Park which, as well as being a Biosphere Reserve, became the first Nature Park in Asturias in 1988. Its lake, El Valle, is the biggest in the region and its brañas (high-mountain pasture areas) are dotted with teitos (thatched roof cottages). Las Ubiñas - La Mesa Nature Park contains the second largest mountain range in the region, the Peña Ubiña Massif and is full of natural monuments, such as the Huerta Cave, home to a large bat hibernation colony, and the Puertos de Marabio, with its peculiar karst complex.

And as well as its unique and cherished culture and historic architecture, Asturias is famed for its delicious food, wine and an unique cider that is a candidate for UNESCO World Heritage status.

How to get to Asturias

Asturias is less than two hours away from the UK. Pre-Covid, there were direct flights from London airports to its regional airport, just north of the Asturian capital Oviedo/Uviéu and west of the cities of Gijón/Xixón and Avilés. It is anticipated that these could start up again for Summer 2022.

Alternatively there are internal flights to Asturias from other Spanish airports including Barcelona, Valencia, Madrid, Malaga and Seville. Spain's Renfe network also offers rail connections to Asturias from many cities Spain and elsewhere in Europe. If driving from the UK, cross the Pyrenees and turn sharp right!

Asturias, bordered by the Cantabrian sea to the North, and stunning mountains over 2.500m high to the south, also makes a superb training camp for any road cyclist, with more than 5,000km of roads to suit all levels. Astonishing roads with an average gradient of 10% and slopes over 23%, characterise the most glorious stages in La Vuelta, Spain’s equivalent of the Tour de France. Angliru, Covadonga lakes, the Farrapona – these are some of the most respected names of La Vuelta, are among the most famous climbs and most iconic finish-lines in cycling, and all of them are in Asturias.

Away from the roads, the mountain bike has in Asturias some of its more awesome natural stadiums:  there are tours for every levels and preferences. For example, riding the Senda Costera (Coastal Path) -14 stages taking in cliffs, beaches, fishing villages and estuaries - is one of the most enjoyable routes on offer, with more than 400km of unspoilt coastline with 200 beaches, as you ride between coastal villages and traditional fishing ports. 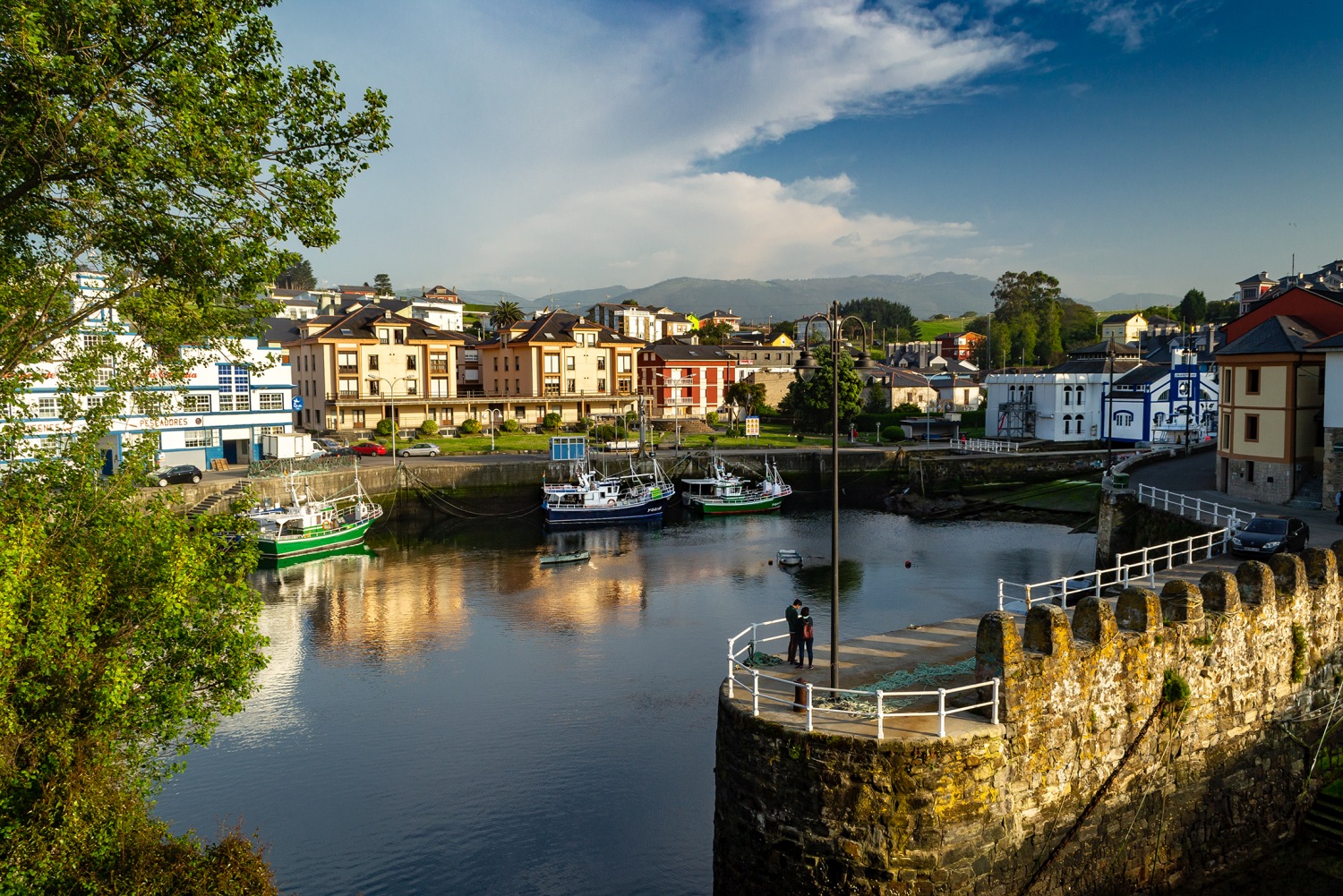 A more extreme option is in the Asturian mountains: here, well-preserved paths help you explore this vivid rural landscape of mountains passes and meadows between thatched roof cabins, stone bridges and impossible gorges. There is little doubt that in Asturias there are some of the most spectacular MTB trails in Europe. The region has two MTB centres -Laviana, which has 30 kilometres of bike trails, and The Gravity Zone in Tineo, where you can enjoy enduro, downhill, rally, marathon, road, family routes and many activities for the whole family.

But Asturias is not just about full-on challenges. Among the best options for family cycling are the Greenways – disused railway lines reclaimed as traffic-free routes for hikers and cyclists. A cycling holiday in Asturias has it all.

Here are three of the best cycling routes in Asturias: 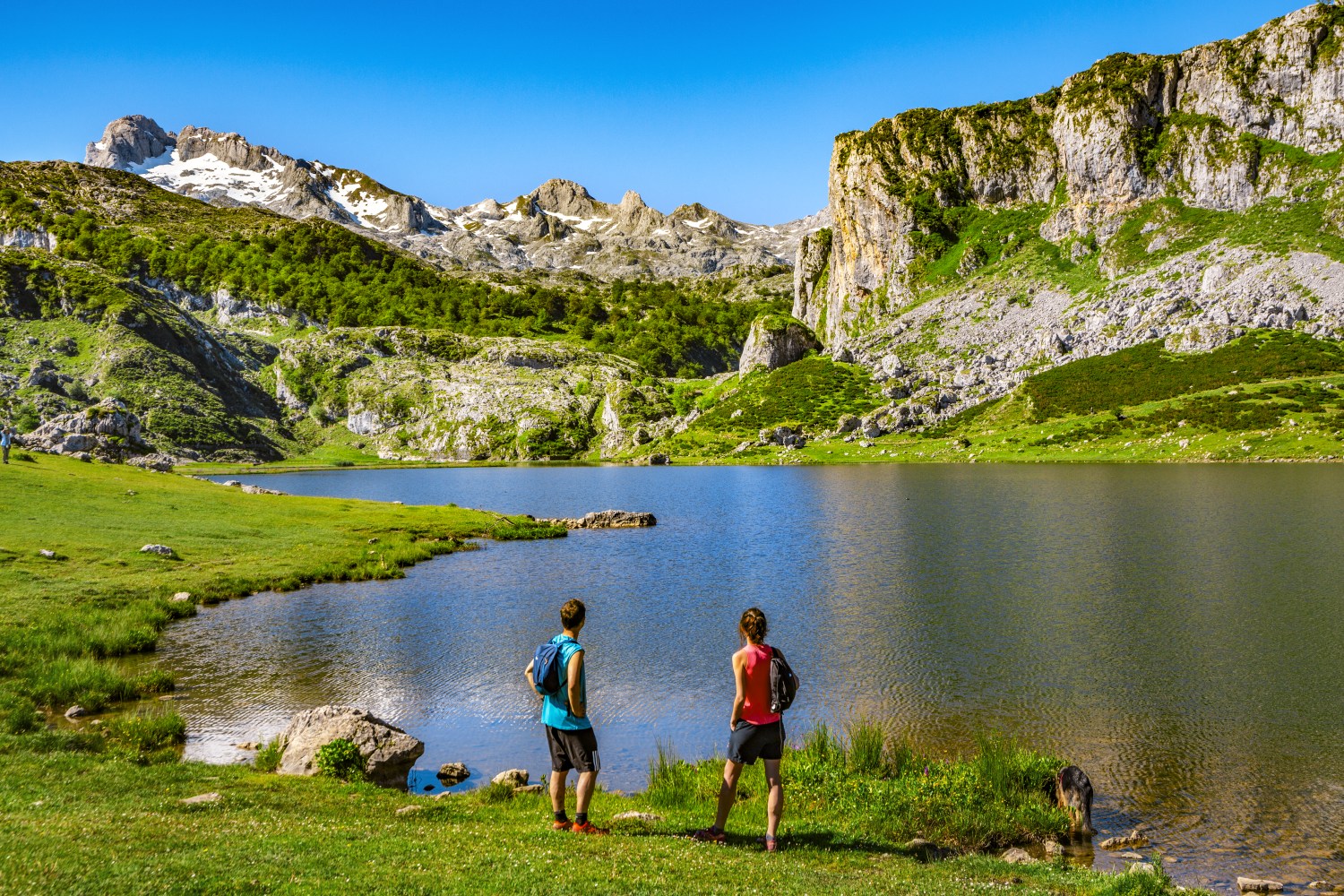 The Lakes of Covadonga, admired by travellers, portrayed by artists, investigated by scientists, goal of athletes, are one of the most filmed places on the planet, especially as a result of being the end of the Vuelta de España stage. The Lakes and all their surroundings are one of those places that you have to visit at least once in your life. From Covadonga, just 8km from the city of Cangas de Onís - the first capital of the old Kingdom of Asturias - the ascent to the Lakes, will open up spectacular views and landscapes.

Apart from the lakes themselves, other highlights include Holy Cave, the Basilica of Covadonga, and the Mirador de la Reina from where you get wonderful views of the northern mountain ranges of the Picos de Europa, Las Vegas from the Güeña river and the Cantabrian coast. 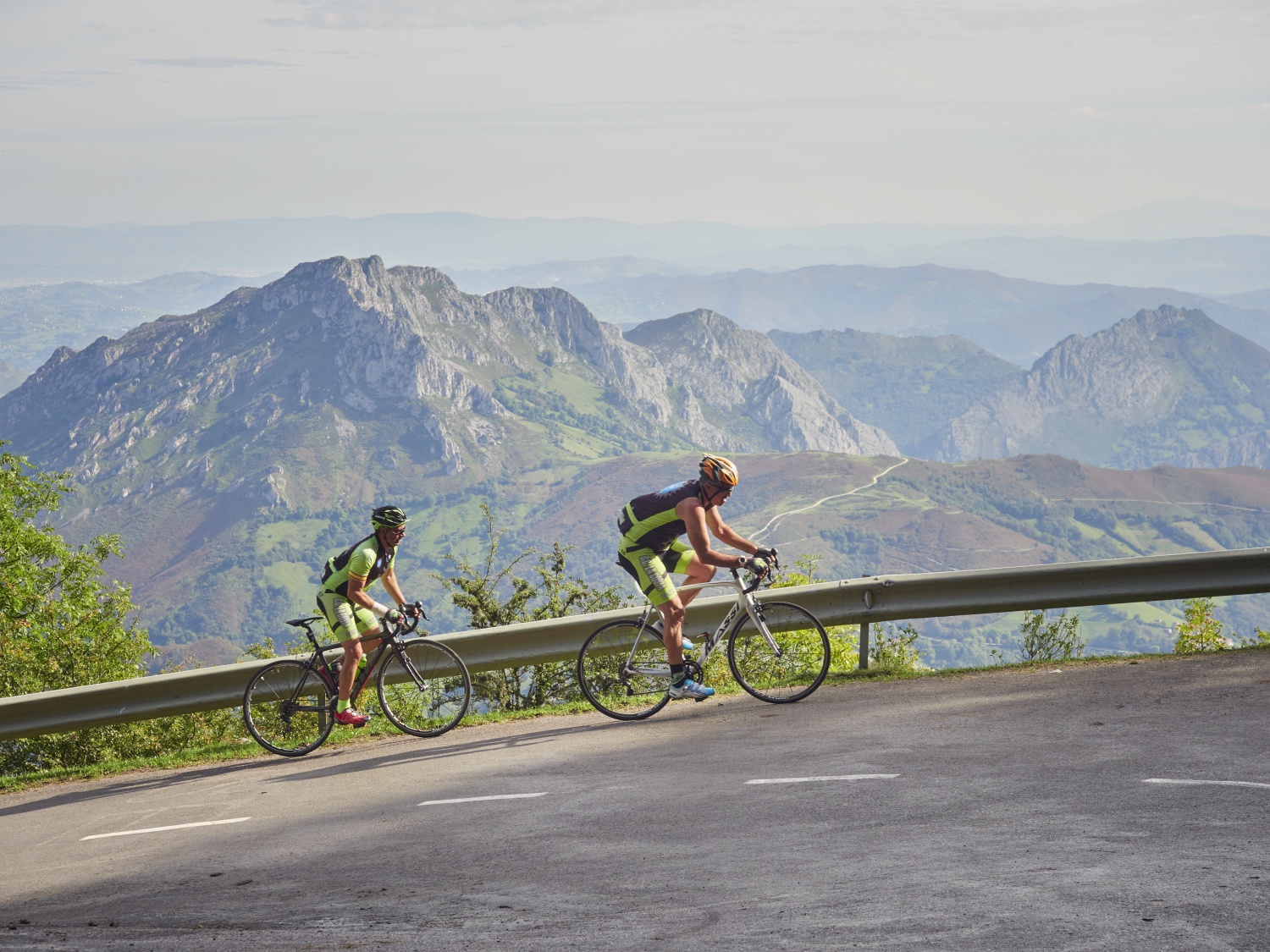 One of the most iconic climbs of the Vuelta de España, the ascent to this famous Asturian summit is an undoubted challenge, with its steep gradients. At almost 13 km, with an average slope of 10.13% and ramps with up to 23.5%, this climb has welcomed many cycling heroes. At the top, stop and take in the views, along with some deep breaths, drink water from your bottle, and celebrate your own victory. After a good rest, start the descent, stopping often to enjoy the views. Your brakes and tires will appreciate those stops!

The Senda del Oso (The Bears’ Trail) is undoubtedly the most recognised Greenway in Asturias: over 60km long, split into two sections, it crosses gorges and stone bridges and cuts through carved tunnels in the heart of one of Europe’s last havens for the brown bear.

It's built on the tracks of an old mining railroad used to transport coal from Entrago in Teverga and Santa Marina in Quirós to Trubia. The trail starts in the village Tunon, in the borough of Santo Adriano. The route between Tuñon and Huerta Cave is 28 km long and takes approximately 7½ hours, while the 25-km-long route between Tuñon and Ricabo takes around 7 hours. Both have gentle slopes and are easy to do.