A little-known but remarkably beautiful region of Spain, Asturias is perfect for hikers, with hundreds of signposted routes through spectacular landscapes.

The natural paradise of Asturias is one of the biggest discoveries of the decade for UK visitors, and for hikers, the region offers miles of unspoilt, wild landscapes to explore - from its rugged coastline, to its mountains, gorges, forests, religious sites and medieval architecture.

A vast network of long- and short-distance hiking trails and local footpaths opens up the region’s remarkable nature. You can choose from historic pilgrimage routes such as the Way of St James, which will heighten your experience of becoming a real pilgrim, and famous routes such as the GR.109 'Asturias interior', one of the most beautiful hiking trails in Spain, which covers the Cantabrian Mountains in Asturias from east to west. With a distance close to 500km that can be extended to 606km, it is divided into 27 stages to discover the vast biodiversity of Asturias, and links the Picos de Europa Biosphere Reserve with that of the Oscos-Eo.

Or the GR.E-9 'Senda Costera' (see below), taking hikers along the coastline, literally from one end to the other. But whatever your preference, for coast or mountain, there are trails in Asturias suitable for all physical conditions and tastes and for those looking for only short excursions. 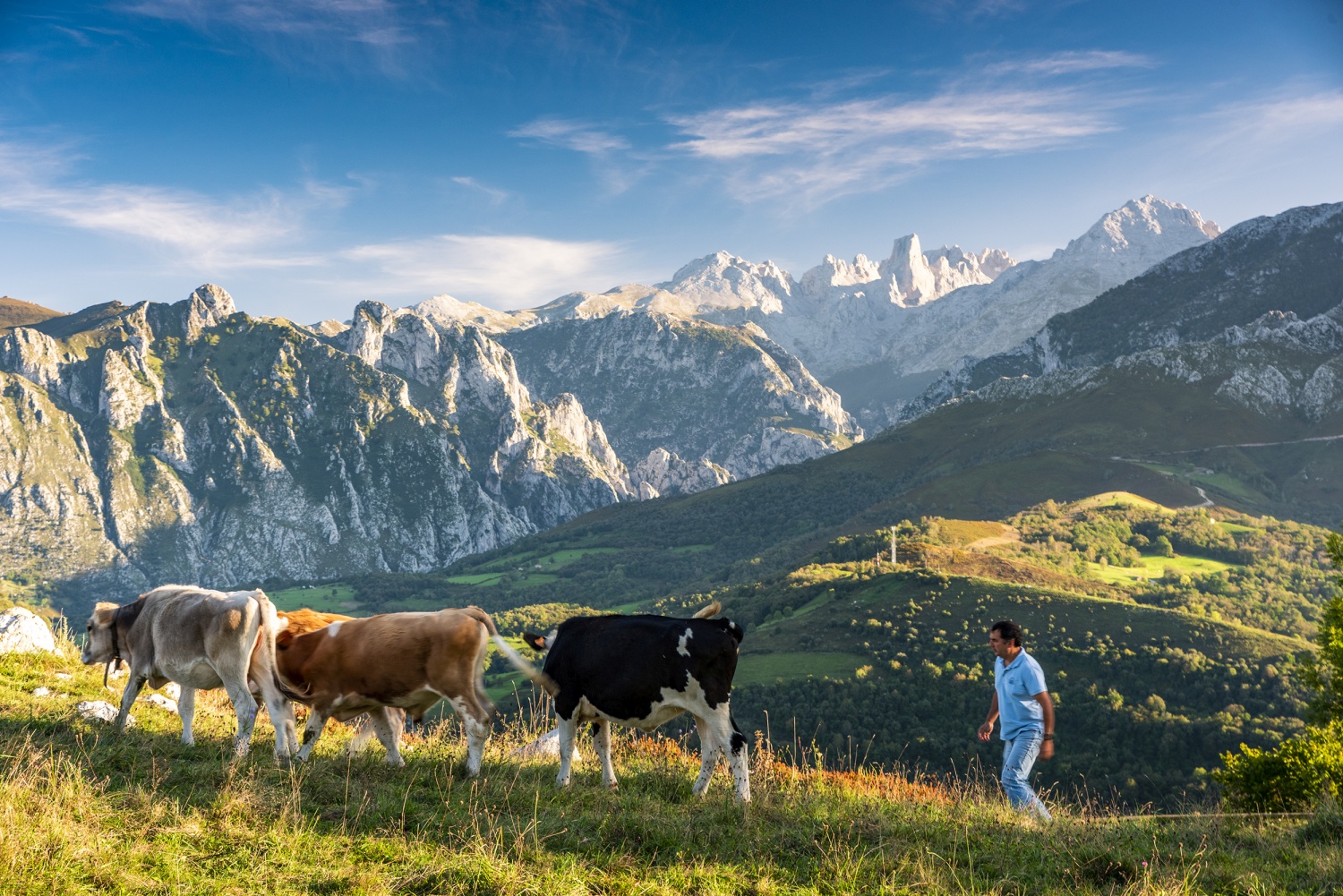 A world away from the Mediterranean Spain of crowded Costas and high-rise hotels, this miraculously protected region is tucked away on the northwest edge of Spain, its 400km of unspoilt coastline home to some of the best beaches in Spain, lapped by the Atlantic in the Cantabrian Sea.

Highlights of the Asturias region

Asturias has one of Europe’s most ambitious environmental strategies, enabling it to have seven Biosphere Reserves, including the Picos de Europa - Spain's first national park and home of the beautiful Covadonga lakes - and more than a third of the region's territory is covered by protection measures. And all of this in an area roughly half the size of South East England.

Asturias is the last refuge in Western Europe for the brown bear. Wolves, too, still roam the silent valleys of the Cantabrian mountains. A wealth of wild fauna forms part of its mountain landscape in which traditional farming is still practised, in perfect harmony with some of the most important forests in Europe such as the Muniellos oak forest or the famous Peloño forest, a beech forest that takes on spectacular hues in the Autumn. 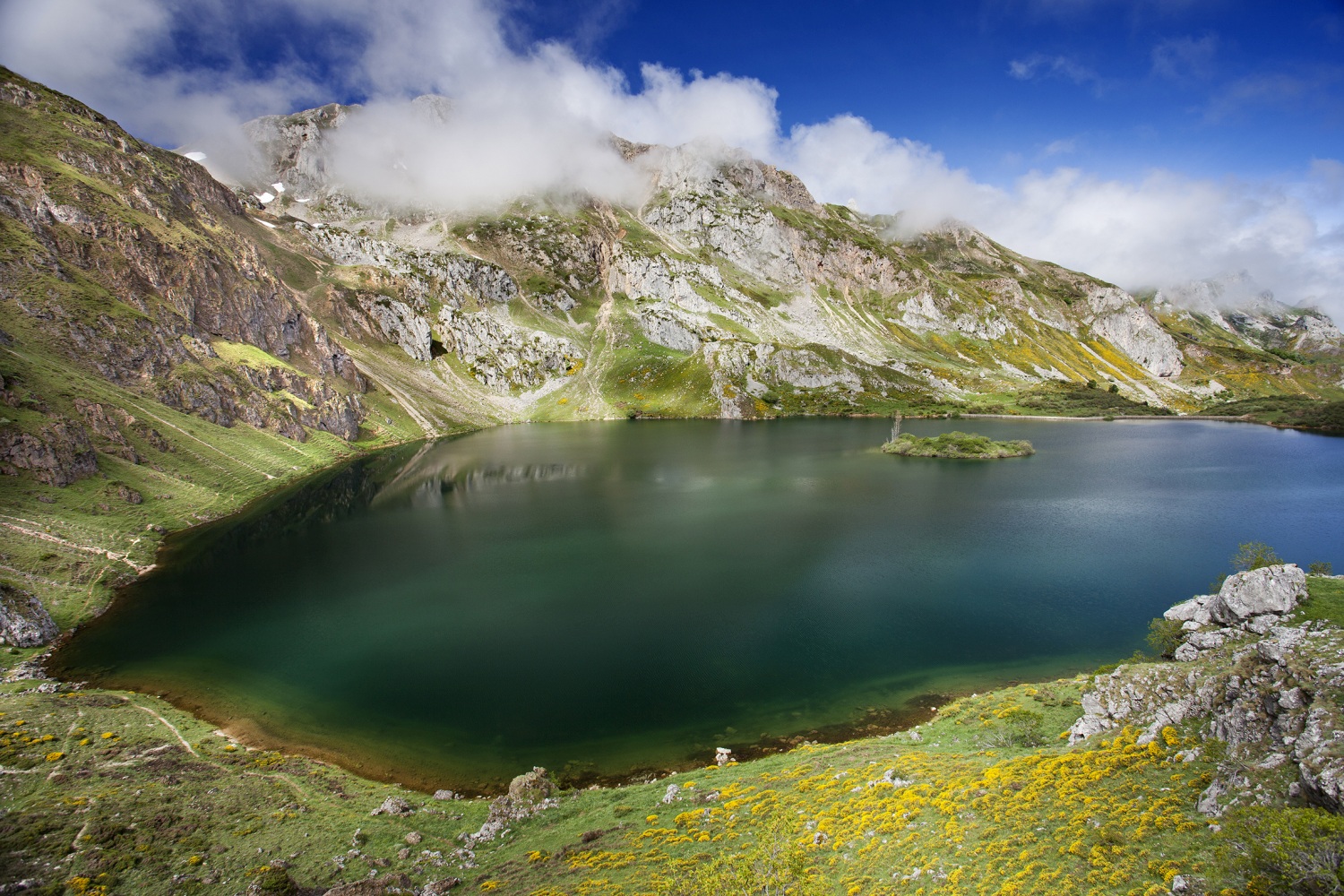 The brown bear's habitat extends up to Somiedo Natural Park which, as well as being a Biosphere Reserve, became the first Nature Park in Asturias in 1988. Its lake, El Valle, is the biggest in the region and its brañas (high-mountain pasture areas) are dotted with teitos (thatched roof cottages). Las Ubiñas - La Mesa Nature Park contains the second largest mountain range in the region, the Peña Ubiña Massif and is full of natural monuments, such as the Huerta Cave, home to a large bat hibernation colony, and the Puertos de Marabio, with its peculiar karst complex.

And while the mountains of Asturias are one of the main attractions for visitors from around the world, its coastline is the best preserved in Spain thanks to the active involvement of its population in environmental awareness campaigns.

And as well as its unique and cherished culture and historic architecture, Asturias is famed for its delicious food, wine and an unique cider that is a candidate for UNESCO World Heritage status.

How to get to Asturias

Asturias is less than two hours away from the UK. Pre-Covid, there were direct flights from London airports to its regional airport, just north of the Asturian capital Oviedo/Uviéu and west of the cities of Gijón/Xixón and Avilés. It is anticipated that these could resume in Summer 2022.

Alternatively there are internal flights to Asturias from other Spanish airports including Barcelona, Valencia, Madrid, Malaga and Seville. Spain's Renfe network also offers rail connections to Asturias from many cities Spain and elsewhere in Europe. If driving from the UK, cross the Pyrenees and turn sharp right!

Here are three great hiking routes to tackle in Asturias: 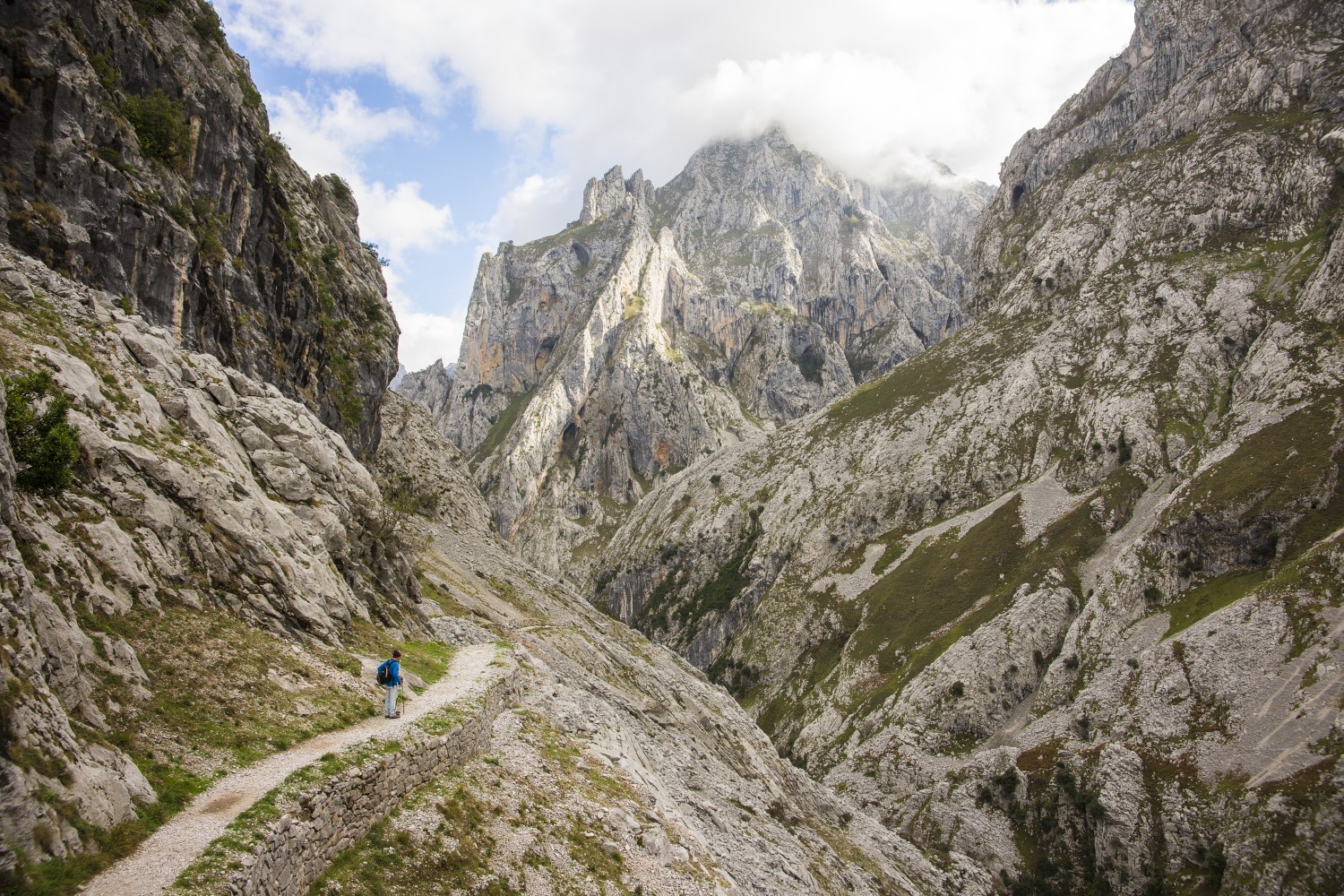 Hiking routes don't come with much more jaw-dropping scenery than this route.  The out-and-back trail from Poncebos hugs the River Cares along a spectacular path cut into the limestone in this impressive gorge, also known as the Divine Gorge, surrounded by mountains rising nearly 2,000 metres. At its most beautiful and spectacular part, the mountain walls almost converge to form a narrow gorge.

These fascinating landscapes, watched over by the impressive Picu Urriellu mountain peak are rugged and untamed, made accessible only by the dedicated hiking path carved into the cliff faces. You'll need a head for heights to take this route on! 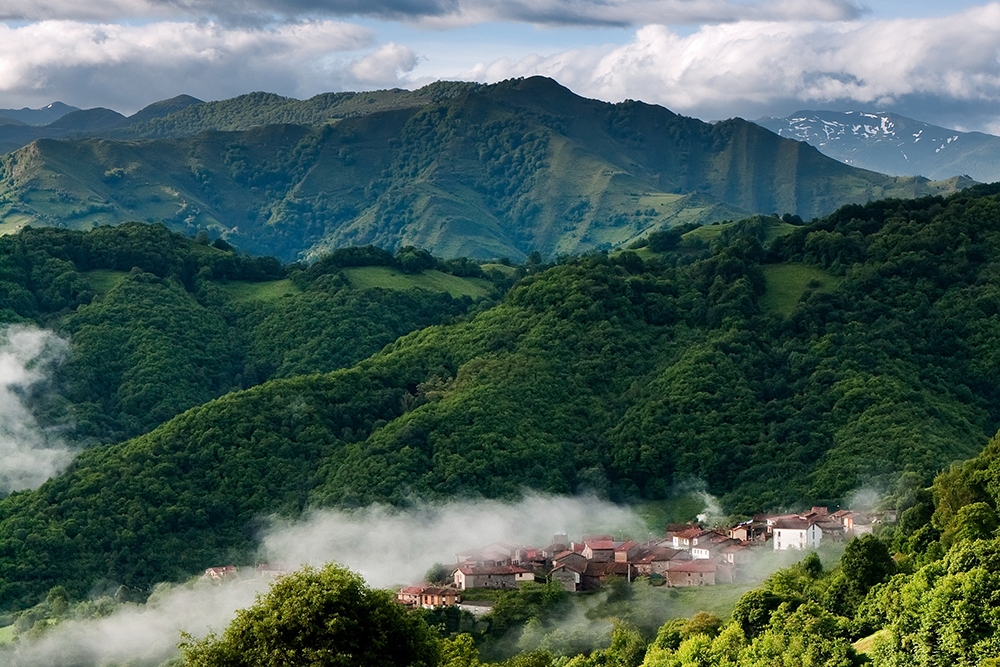 The northern itineraries of the Camino de Santiago, which converge in the Principality and which have Oviedo / Uviéu as their heart, have been classified by UNESCO as a World Heritage Site. The region actually has four different ones, each with its own beauty and uniqueness.

The two main itineraries are that of the Coast, which is the one that starts from Irún (Basque Country) and runs parallel to the Cantabrian mountains; and the Primitivo, which according to legend is the one followed by King Alfonso II of Asturias in the 9th century in the first pilgrimage to the tomb of the apostle in Santiago de Compostela.

Highlights of the coast route include the church of Santa Maria del Conceyu (Llanes), the church of San Salvador and the monastery of Santa María la Real de Valdediós and the temples of San Salvador de Priesca and San Juan de Amandi, all in Villaviciosa; the Campa Torres Natural Archaeological Park and the mound necropolis of Monte Areo between Gijón and Carreño, the historical case of Avilés, and Gauzón castle.

Highlights of the Primitivo include the bridges of Gallegos, in Las Regueras, and Peñaflor, in Grado. You'll also learn about the legend of the devil who baptised the Salime or Susalime towns, today buried under the waters of the gigantic Grandas de Salime dam. 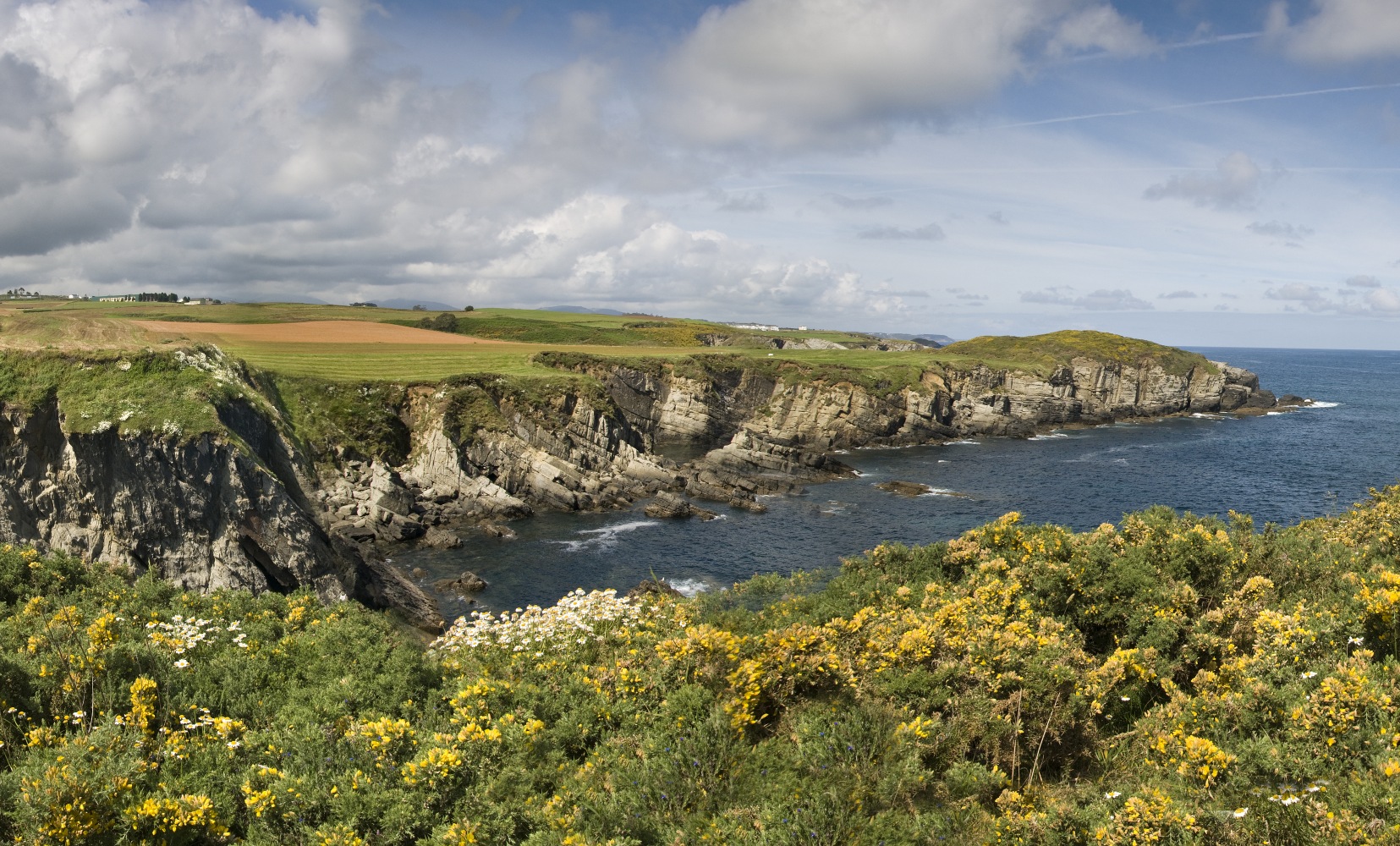 There are five sections of a coastal route that runs along the best preserved coastline in Spain, from one end of the Principality to the other, following cliffs, beaches and inlets. Here, the sea and the mountains, the rocks and cliffs, the green and the blue, the foam and the wind, the waves and the sand intermingle.

Among the many highlights are the dinosaur footprints of La Griega, the 19th century Peñes lighthouse, Xagó beach, with its splendid dune system,  the striking viewpoints of the stretch from San Esteban to Playa de Aguilar and the countless beautiful coves, 18 picturesque fishing villages, miles of deserted beaches, and clifftop scenery you'll pass through along the way.