Climbing the via ferrata in Switzerland

IT’S THE POINT WHERE I’M CLIMBING UP what isn’t just a sheer face of rock, but an overhang. My arms are screaming. My safety harness with its two carabiner system will stop me from falling, but that’s not the point. For reasons of foolish pride I’ve already told myself I’m not going to sit back in my harness when it starts to get diffi cult.
I’m climbing La Resgia, a new via ferrata on the outskirts of Pontresina, in Engadin St. Moritz in the Swiss canton of Graubünden. Most people will recognise the better known name of its neighbour St Moritz, ski resort for the rich and famous, but Pontresina is carving its own little niche in the variety of outdoors activities on offer.
Via ferrata is an Italian term, literally ‘iron way’, and the idea is that with fi xed cables, rungs and other aids, you have a fully protected climbing route which you simply have to clip into. The energy to get you up it, not to mention the head for heights, is supplied by you alone. Graded 4 for diffi culty on a scale of 1 to 6, La Resgia is a 600-metre route which sees you climbing 273 metres, and encountering not just the usual ladder rungs, but a cable walkway and a couple of steel cable nets for added entertainment.

I’m with Res Bähler, not just my guide, but the man who devised and built La Resgia. He runs Go Vertical in Pontresina, does climbing and ski guiding, and is generally interested in showing there’s a younger breed of people running outdoors activities keen on breaking away from the old staid way of doing things. As for me, while I’ve hiked and scrambled all my life, and done the odd bit of rock climbing, caving and canyoning, this is my very fi rst via ferrata.
‘This first section is easy,’ he tells me. ‘Manage this OK, and we can carry on and do the rest.’ 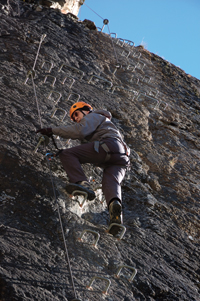 My harness is like a regular climbing harness, but the big difference is the two elasticated straps with carabiners which ensure that as you unclip one to move it up to the next part of the cable beyond where it’s bolted to the rock, the other is still attached and protecting you should you fall. Depending on where you and the rock face part company, you could end up sliding several metres before your fall is broken, so to prevent the sudden stop doing you any injury, the harness also incorporates a special shock absorber which only operates when it’s under extreme load.

The first part of the climb is indeed relatively easy, with iron rungs fastened to the rock providing hand and footholds where there isn’t anything suitable naturally. It gets diffi cult further on, with rungs up an overhanging cliff – that one really gets your arms – not to mention the wobbly steel cable nets, the bigger one over a dramatic drop, to test not just your strength but your resolve.
Halfway up it’s suddenly like entering a parallel universe. Bizarrely, perched on the steep mountainside is a small bit of decking and a wooden bench. It could count as one of the most unlikely places ever to enjoy a sit down on a bench, but the view along the Bernina valley and up towards Piz Palü is spectacular.
Had there not been some snow just before I arrived, I might have gone for a glacier walk. But if you fancy some hiking without all the technical stuff, then a walk in the National Park is an excellent option. Surprisingly, perhaps, Switzerland has just the one, founded as long ago as 1914.
Unlike parks in some countries, the rules here are very strict. Basically you can’t do anything other than walking and looking at things. Going off-trail even to sit down is forbidden, although it’s OK next to the path. If you want to sit down and get stuck into your packed lunch, you have to wait until you reach one of the marked out picnic areas.
It’s the kind of thing you can do on your own, but with me is National Park guide Martin Schmutz, an expert on the wildlife. We’re both armed with binoculars, but he also has a high-powered telescope and tripod. We set off up the wooded side of Val Trupchun in the shade. In places this proves a little tricky, as the path is glassy smooth where snow has fallen, melted and then frozen. This is one of the few walks in the park you can do as a loop, and we’re heading for the top of the valley, where a short hop over the pass would see us into Italy.
Every so often we stop and Martin sets up his telescope on the tripod. At times I wonder whether his glasses are equipped with some secret weapon Specsavers don’t know about, because he spots chamois and ibex on distant mountainsides which are completely invisible to me. Throughout the walk we see so many of each I lose count, but I learn that you can estimate the age of an ibex by the rings on its horns, and that the male chamois has more of a pronounced hook on its horns than the female.
What we don’t see is any red deer, the biggest animals in the park, which at this time of year have already fi nished rutting and moved away for the winter. In fact, as we descend the valley, Martin fi nds himself the unoffi cial red deer information service, as hikers spot his National Park badge and ask whether they’ll get to see any. I discover too that ibex in German is steinbock, whereas steinblock means a piece of rock. Which just goes to show that even in German, one letter can make an ‘L’ of a difference! (groan! – Ed)
There are maps and guides available to do these walks, and given that the National Park forbids you going off-trail, you can’t really get lost. You can even rent a GPS-enabled electronic guide which shows you where you are, and gives you lots of related information, or get an equivalent download for your iPhone or Android. But unless you’re really eagleeyed yourself, you might consider going with a guide if you want to see lots of wildlife. I certainly would have missed it had I been on my own.
Once the walk is over, we head into Zernez, and the National Park Centre. It has a simple but effective layout in six rooms, with exhibits showing what the park and its wildlife are all about. I particularly like the interactive element, with lots of buttons to press, and handles to turn, including a deer’s head, with rotating antlers to show how it looks at various stages of its life. The kids love it, but it’s a fun way of putting the message across to adults, too. 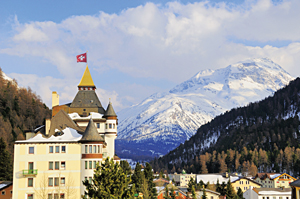 Back in Pontresina, it’s time for a little sustenance. Just a few minutes’ drive from Europe’s highest airport, it’s a traditional Engadin village nestling in a sheltered valley, and rather more laid-back than nearby St Moritz. When it comes to eating and drinking, the bars and restaurants tend to be in the various hotels. Pitschna Scena, in the old part of the Hotel Saratz, is as popular with locals as the guests. Wood-panelled walls, sloping fl oorboards and not a square corner to be seen anywhere. Tuck into an Angus cheeseburger and fries for CHF23, or go the whole hog with a veal T-bone steak, baked potatoes and green beans for CHF45. The bar here is pretty cool, too, with Thursday night live music sessions of blues, jazz or rock. For the more frenetic club kind of experience, you’ll need to take a taxi into St Moritz. If you want to eat something typically Swiss, try a plate of Rösti (pan-fried potatoes) in Café Puntschella, or the rustic cheesy delight of Älplermagrone – Alpine macaroni, which combines macaroni, potatoes, cheese, pepper and onions in one tasty and filling dish.
Having spent a lifetime doing all my own bike pedalling, I was a little concerned that going for a ride on an e-bike – one of these high-tech electrically assisted models – might be the sissy option. In fact, what these very clever bicycles do is give you a helping hand when you really need it rather than total propulsion. You can set the point where it cuts in at low, medium or high, although the higher setting drains the battery rather more quickly.
The plan is to head from Pontresina to St Moritz, taking in a couple of lakes along the way. The cycle trails through the woods are actually what in winter
becomes cross-country ski trails. Never having ridden a motorbike, the idea of power assistance on two wheels is a little strange, but it’s not so much limitless power as a little kick when you’re setting off, and a welcome boost when the gradient starts to make your legs complain. The bikes also rather effi ciently put power back into the battery when you’re freewheeling downhill, so just when the little red LEDs tell you the battery’s running a mite low, a downhill stretch will perk it up again.
At the Hochseilgarten adventure park in Pontresina, fi endishly constructed cable walkways 16 metres above ground level through trees conspire to test your balance and the strength in your legs. Wearing the kind of harness used for via ferrata, with two carabiners on straps, plus a pulley, the idea is to maintain at least one point of contact with a safety cable at all times. The course includes single cables to walk from one tree to another, plus rungs suspended like swings which tend to move apart with your legs stretching between them.
The biggest rush is the zipwire, which whizzes you 104 metres from one side of a river to the other. The trick with this one is to make sure you actually get up enough speed to ensure you reach the other side, otherwise you need to pull yourself along hand over hand along the cable – not so easy when it gets to the uphill bit. So best not do what I did, and accidentally attach your safety straps the wrong way round so they slow you down! Fortunately I still made it to the other side...

All the info...
Getting there
Swiss ( www.swiss.com) fly from London Heathrow, London City and Manchester to Zurich. From there the trains ( www.sbb.ch) all connect up beautifully, ending up with the journey from Chur to Pontresina on the Rhätische Bahn, one of the world’s classic rail journeys, and since 2008 on the UNESCO list of World Heritage sites. Passes for unlimited travel on Switzerland’s public transport from www.swisstravelsystem.ch.
Prices
Hotels:
Not exactly cheap (nothing is in Switzerland), but they tend to include useful extras such as free mountain bikes, and if you book a minimum of two nights you can enjoy free use of all cable cars and public transport in the Upper Engadin. Price for two sharing a double room
HOTEL SARATZ from CHF295
SPORTHOTEL from CHF230
HOTEL STEINBOCK from CHF220
Activities:
HOCHSEILGARTEN: CHF35
E-BIKE: CHF30 for half-day or CHF45 full day from Fähndrich-Sport.
GUIDED 6-7 HOUR WALK IN THE NATIONAL PARK: CHF25
LA RESGIA: Only open July to October. There’s no charge, but you do need a dedicated via ferrata harness, plus helmet. Rent from Go Vertical. 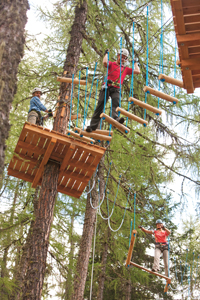