Sian Lewis cycles across Japan’s southernmost island, in search of deities and dumplings.

Japan is not one island, but an incredible 6,852 of them. One is home to an active volcano that spews poisonous gas. Another is an art museum. And you’re only allowed to live on a third if you’re a cat. So picking just one to explore by bike is a challenge, but Kyushu, Japan’s southernmost island, is a pretty good place to start. Home to temples, mountains, traditional onsen hot springs, busy cities and as many dumplings as a hungry cyclist can hope to devour, Kyushu is also the perfect size - its two coasts, 150 miles apart, make the perfect bookends for a bike ride.

I know I’m in Japan as soon as I land at Osaka airport, because I’m greeted by a cheerful robot who wants to help me buy a train ticket. The transaction complete, I hop on a dolphin-nosed bullet train, which glides at warp speed into the city centre. Japan’s second-largest city makes a fitting first taste of the country’s modern side – the yang to Tokyo’s yin, Osaka is all tall skyscrapers, crowded streets, and enough neon signs to make Times Square want to give up and go home. 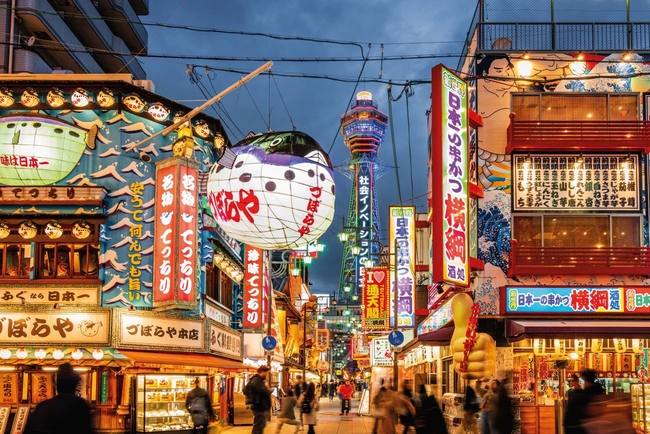 Most of the city feels like something straight out of Blade Runner, but as I wander Osaka’s streets I realise that there’s also an old-world charm to the place. At wooden stalls in a busy street food market, wizened old men sell local specialties, including takoyaki octopus balls and fat gyoza dumplings with rice vinegar dipping sauce.

Among the glitzy shops, I spot a peaceful Buddhist shrine, almost completely hidden away. The statue has been doused in water during prayers so many times over the years that it’s impossible to discern the chubby god hidden underneath layers of dripping moss.

I’ve arrived in Osaka just in time to catch the natural phenomenon that the Japanese flock to see each spring – sakura, the coming of the cherry blossom. At Osaka Castle, trees are heavy with delicate pink flowers, which are just beginning to drift down and coat the floor like confetti. Locals walk around gazing up in wonder, or picnic under the branches. The fleeting sakura is so well-loved in Japan that there are websites and apps – even segments on the evening news – dedicated to reporting when the first of the prized petals will appear. “Pink is the most valued blossom” smiles my receptionist at what I can only describe as the strangest hotel I’ve ever stayed in. Osaka’s First Cabin Hotel is a ‘capsule’ hotel in which each guest sleeps in a tiny pod designed to feel like a first class seat on a plane.

My miniscule room has a bed, a side lamp and not much else – I can reach out and touch all four walls at once, but I’m so jetlagged that it feels rather cosy. My first day in Japan has been as weird and as wonderful as I had hoped – but now I’m itching to escape the city and see more of the country’s wilder landscapes by bike.

Another slick bullet train speeds me south to Kyushu, Japan’s third largest island. In the city of Fukuoka on the western shore, I find my guide, Eric, loading up a support van ready for our island-crossing ride. 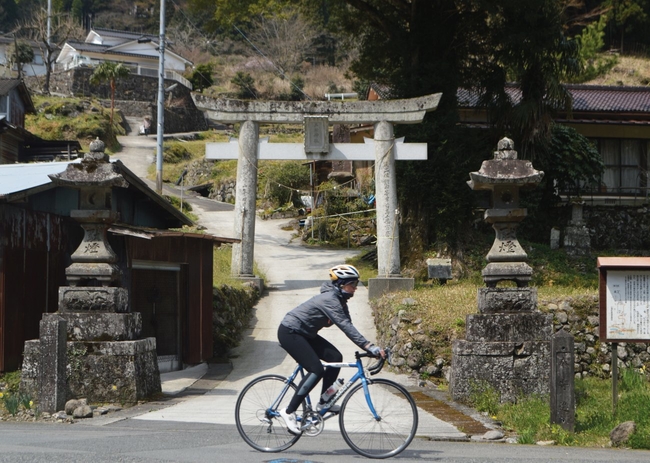 Our journey will take us from the west, where Fukuoka meets the sea, all the way to the east coast, riding along Kyushu’s winding mountain roads in search of old temples, volcanic peaks, sleepy villages and I hope, plenty of noodle pit stops. We’ll also be seeking out a new onsen - a traditional hot spring used for bathing - each night. Perfect, Eick reckons, for relaxing leg muscles after long days on a bike. “Ready to go onsen hopping?” he laughs as we pull away from the curb for our first day in the saddle.

Our group of six cyclists follows Eric uncertainly into the honking city traffic like a line of ducklings. Fukuoka gets more and more unlovely towards the suburbs, and I have to grit my teeth as huge trucks scream past us. But soon the sprawl fades away and we’re on flat country roads, cycling past terraced fields where plum trees have been pruned into elegant curving shapes.

Eric has lived in Japan for decades, and it’s clear he wants to take us off the beaten path – in both a cycling and culinary sense.
Our first lunch stop is a tiny, rather dingy-looking noodle shop in a small village. There’s no sign, and no menu. “Trust me,” says Eric. We do, and are rewarded with huge, steaming bowls of broth full of thick udon noodles and topped with peanuts. The rich pork soup is the perfect warming tonic for the miles we’ve pedalled. We copy the locals, sitting cross-legged at low tables and trying to slurp up our noodles as they do. Slurping in Japan shows enjoyment of the meal and cools the noodles down fast.
It’s a flat and laid-back 50 mile ride into the town of Hita in the afternoon, cycling past Japanese gardens where bonsai and ginkgo trees grow among perfectly pruned rockeries.

I go for a walk in Hita as the sun starts to set, climbing up to the Shinto shrine that perches above the town. There’s no one else here - it’s just me and a shadowy temple flanked by huge stone statues of grimacing dragons who look like they might come alive at any moment.

At the Kizantei Hotel, I learn the basics of sleeping Japanese – my room has no bed, just a mattress to roll out over tatami mats on the floor. I also get to take my first onsen. Simply meaning ‘hot spring’ in Japanese, these bathing pools are scattered across Japan, fed by the boiling water which bubbles up from the ground everywhere on the archipelago.

Onsen can be manmade indoor or natural outdoor baths, but the same, strict etiquette applies regardless. Men’s and women’s baths are separate. First, you wash fully, then enter the baths naked. You’re given a tiny towel, but it’s not to cover your modesty – locals fold it up and pop it on their heads. Tattoos must also be covered. I finally take the plunge, sinking into one of the rocky pools and deciding that Eric is right - the piping hot water is wonderful for easing cramped cyclist’s legs. 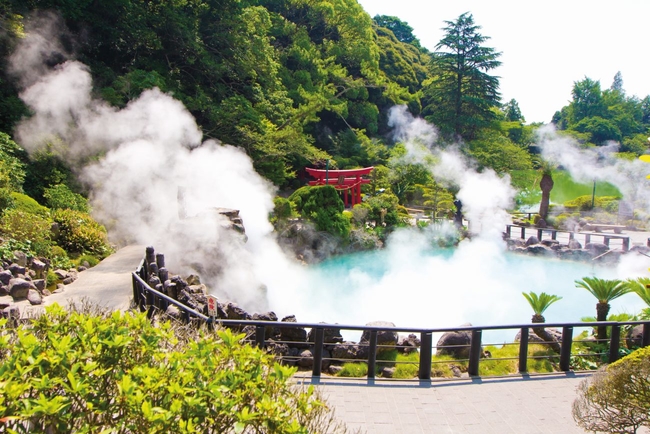 Our first 50 miles felt like a doddle, the landscape pretty, but flat. The second 50 miles, however, take us straight over Oishetoge Pass, a steady climb that’s punishing enough to keep my lungs pumping all day as we round endless curves of mountain road and steadily gain altitude. When we reach the town of Usa, I’m exhausted. But the biggest climb is still to come.
The third day’s route is just 35 miles, but what I haven’t considered is quite how high we’ll be climbing. We cycle up and up into the mountains, and into a landscape so gorgeous and painterly it takes my breath away with every turn (or perhaps that’s just the punishing hills).

“This area is called Midori Machi – ‘Green Town’” says Eric, of the rolling hills that fall away from us as we skirt the jade-green flanks of 750 metre-high Mount Futagi. You might think you were in Swiss Alps if it weren’t for the Japanese chalets with ornate roofs that dot the hills. It’s all I can do to keep pedalling up the never-ending incline, sweat dripping from my face, but the sheer beauty of the road keeps me going. Every turn reveals stone temples, red Shinto shrines, candyfloss-pink sakura blossom and, best of all, laid-back mountain inns where we stop to refuel.

The food is always delicious, but frequently unidentifiable - poor Eric has to endure my asking what everything is. But I even brave the fish eye stew, which proves to be rather tasty, especially after a fortifying glass of sake or two. I also discover that there’s nothing for getting you to the top of yet another mountain pass like the promise of a protein hit from freshly-made sushi at the end of it. 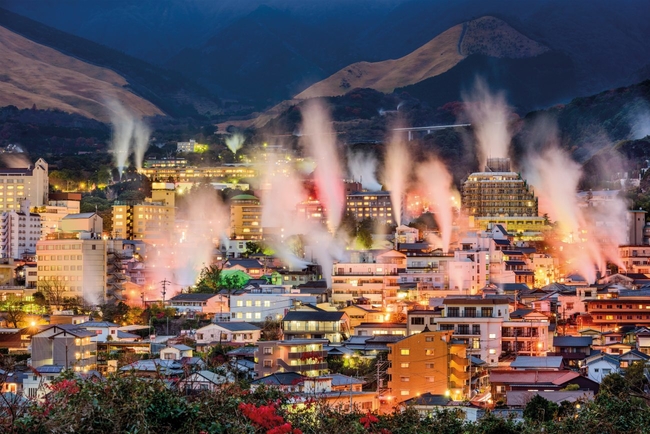 On our last day in the saddle we roll into the spa town of Beppu. The roads are mercifully flat all the way to the sea, and the point where we’ll complete our coast-to-coast ride. We celebrate in Beppu’s fish market, where you can choose from a range of just-caught delicacies, which are prepared in front of you. Deep fried oysters turn out to be a fitting end to an adventure that’s been as much about the food as the bikes.

Kyushu is the perfect pocked-sized incarnation of Japan. Crossing it has been a journey - through glorious mountains, big cities, and storied temples - which has given me a real taste for Japan, but also left me wanting to see more of this fascinating archipelago. One down, 6,851 islands to go.

Welcome to the island where cats are king. Cats outnumber humans by six to one on Tashirojima, and they have a pretty idyllic life, prayed to by locals and cuddled by visitors.

Naoshima is one big art gallery, where culture lovers can wander between museums, architectural exhibitions and open-air installations on the shore.

This isolated island was historically used as a place of political exile. But the deposed Emperors and problematic monks sent here left their mark, turning Sado into an stronghold of traditional culture. 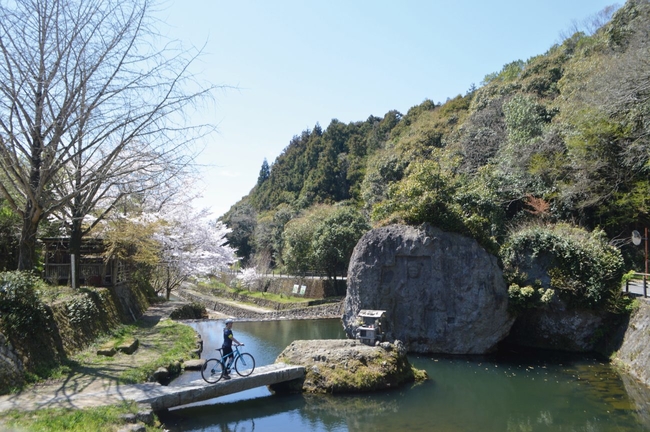 Japan is a safe and easy country to get around. Pack sunscreen for long days on the bike.

Pack padded shorts, bib shorts and long and short cycling jerseys, plus a warm, waterproof cycling jacket. A Camelbak backpack is useful for drinking on the fly.

Sian travelled to Osaka with KLM, who fly from London from £462 return and from Edinburgh from £508 return.

Japan’s excellent high-speed bullet trains make it simple to travel between cities. In Osaka, the metro is efficient and easy to navigate. The Hills are Alive with the Sound of Cyclists: Exploring SalzburgerLand by Bike