Enjoy Some of the UK's Best Beaches

The UK has some of the best beaches in the world. Ben Mondy spills the beans on some of its gems

How can you not love a place named Mumbles? The name of this picturesque Welsh village is derived from the French word mamelles meaning ‘breasts’ (cue teenage boy giggle) which French sailors used to describe the two offshore islets near the village.

Located on the Gower Peninsula in South Wales, the actual town of Mumbles nestles and falls into the steep cliffs that overlook the great sweep of Swansea Bay. The famous ‘Mumbles Mile’ is the seafront strip hosting a number of old pubs and restaurants, where you can sip on pints of bitter and watch as the tide recedes into the silver sands, framed by the pier at the bay’s end.

However it’s not just the charm of Mumbles that will keep you returning to this magic part of the world. It is only a short walk over the hill to Langland Bay,  where waves march in orderly lines from the Atlantic Ocean, as if tailor-made for surfers. Surfers from all over the UK travel here, to ride one of the UK’s best waves, the infamous Crab Island.

Alternatively you can also hop in the car and take in any number of pristine beaches, like the sweetly named Bracelet Bay and Limeslade beach. And of course a trip to the Gower is not complete without a visit to the far end of the peninsula at Llangennith, where walking trails on 300-metre-high cliffs provide amazing 360-degree views of the whole peninsula, buffet miles of sandy beaches. There is also a RYA-accredited yacht club in the nearby Swansea Marina, and horse riding.

The M4 runs parallel to the coast allowing easy access from England.

For guesthouse and hotel accommodation try Langland Cove Guest House and Coast House in Mumbles. For camping hit the Hill End camping site on the beach at Llangennith.

GSD Surf (www.gsdsurf.com) is the only level 4 approved BSA surf school in Wales. There are women-only sessions and junior surf academies as well as half-day group lessons. www.enjoygower.com

Woolacombe is a sleepy village nestled in the rugged and unspoilt North Devon coastline. The hub of the village, and its main attraction, is the five-kilometre stretch of beach that splays from right out in front of the town and then runs along to the majestic headlands of neighbouring village of Putsborough – the only blue flag beach in North Devon.

This part of north Devon is mainly known for the surfing centre of Croyde, the thatched village that lies only eight kilometres to the south of Woolacombe. And while Croyde has its attractions, a excellent surfing beach and a thriving social scene based around its two pubs, it tends to soak up most of the traveling trade, leaving the white washed buildings, tiny old pubs and breathtaking walks of Woolacombe to those in the know and the more adventurous.

On sunny summer weekends Woolacombe beach comes alive as surfers, families and locals mingle and throng to the hard sands, clean water and gentle fun waves of the beach.

You can walk on the nature reserve on Baggy Point, the headland at one end of Woolacombe beach. Or, it is only an hour’s drive to the rugged beauty of the Exmoor National Park.

Turn off the M5, via the A361 and Barnstaple. Be prepared though, the roads of North Devon tend to be quite slow, especially with summer traffic.

The B&B at Headlands Hotel is excellent while for self-catering Surfersworld (www.surfersworld.co.uk) is perfect for beachgoers. Finally for camping head to Woolacombe Bay Holiday Parcs open year-round. 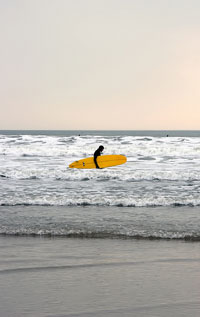 Bude, the northernmost town of Cornwall, is dubbed ‘where the country meets the sea’. Either side of this bustling seaside village, long expanses of green tumbling fields run up to the craggy and crumbling coastline, from thousands of years of an unrelenting North Atlantic Ocean onslaught.

The area offers everything from a relaxing short or weekend break to challenging activity holidays in natural surroundings, family holidays with nearby attractions and adventure parks, and opportunities for surfing, walking and cycling.

The beaches have with the largest tides in the country can go from Sahara-like sand expanses to filled rock pools in hours, which can help the swell create bigger waves for the surfers.

If you want to stay dry, follow the 42-kilometre trek following the amazing north Cornwall coastal walk. Of course you can dip in and out, starting at one of the many historic villages and finishing a few miles later at a sixteenth-century pub.

Head off the M5 just past Taunton, and strike out for the A39, known, surely ironically given its one lane, as the Atlantic Highway.

An excellent B&B option is Trevigue set on a working farm. A cheaper option is North Shore Backpackers (www.northshorebude.com) while The Widemouth Manor (www.widemouthmanor.co.uk) has ocean views and the infamous Manorism nightclub, a good thing, or a bad thing, depending on your nocturnal habits.

The Isle of Wight is probably best known for Cowes week – some serious yachting and also the oldest sailing regatta in the world.

To avoid the holidaymakers and busy east coast resorts jump off the ferry and head to Niton on the western and least commercialised side of the isle. A long walk is the B3322 from Freshwater to the westernmost tip, which takes in the stunning views of the offshore Needles.

This area is also hub of the surprisingly strong surf scene, where hardcore locals wait for the fickle English Channel to provide some sort of waves. As soon as one shows, they flock to the water to get their fix. If you join them, afterwards you might want to hit the local village pub, The Buddle Inn, where you can warm your bones and enjoy a very well earned pint. From there head to the Spyglass Inn, for some locally caught quality seafood.

Red Funnel Ferries run every hour to Cowes from Southampton, while Wightlink ferries head out from Portsmouth and Fishbourne.