Hiking La Gomera - A Walk on the Wild Side

La Gomera – one of the lesser-known Canary Islands – is home to the world’s only surviving whistling language. Silbo Gomero is centuries old, and until it became a compulsory school subject in 1999, had been kept alive by parents passing it down to their children.

Why should this be of interest to the active traveller? Well, think about what would necessitate the development of a method of communication that bizarre and complex, with sounds that can travel up to five kilometres? Impassable terrain. Bottomless canyons. Soaring ridges. La Gomera boasts a topography unlike anything I’ve experienced before.

Like the rest of the Canarian archipelago, the island is the result of volcanic activity, but its geological architecture is quite different to neighbouring Tenerife. The island is characterised by plummeting ravines - known locally as barrancos - and extensive ridgelines that could not have been designed more effectively to impede travel. The valleys are so steep in places that it seems crazy that the highest point is only 1,500 metres above sea level. It may be diminutive compared with the 3,718 metres of Tenerife, but the crisscrossing of barrancos makes for a much more dramatic and varied – not to say dizzying – landscape.

So imagine farming one of the hillsides – impossibly terraced as they are – and realising after your lengthy commute, that you’d forgotten to tell your partner you’d be late home for dinner. She may only be a few hundred metres distant as the crow flies, but potentially several hundred vertical metres away. 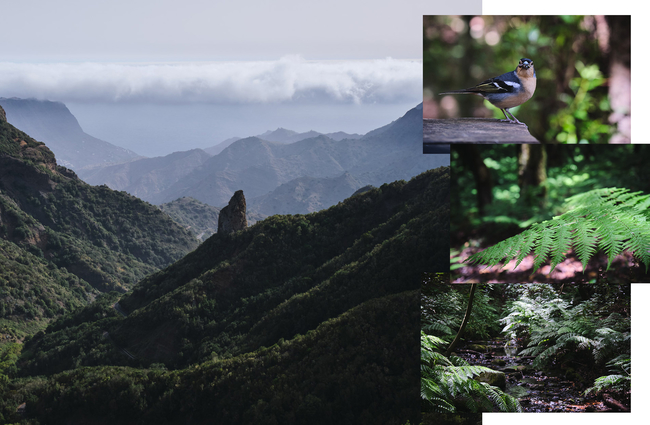 That’s when the elaborate whistling comes into its own. It’s far from just an antique curiosity either. Silbo Gomero was declared part of our Intangible World Heritage by UNESCO in 2009, partly due to the extensive efforts which have been made to keep it alive. At one stage, we have a chance to hear a demonstration - it’s hard to believe that the rather inelegant-looking technique - a bent knuckle held between the lips - could elicit such beautiful and ornate music, like a human manifestation of a song thrush. But it does.

There are many other welcome consequences of the island’s precipitousness, but one of note is the lack of beaches, and therefore the lack of development of beach-holiday-infrastructure. The edges of the land simply fall into the Atlantic Ocean, often from a great height, like a fortress designed to keep away all but the most intrepid explorers. What lies within those walls is wild indeed. 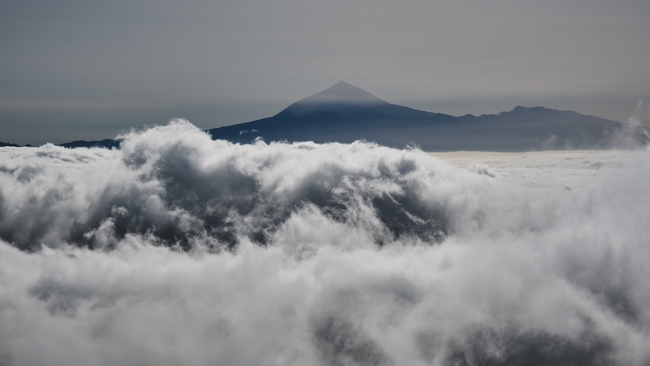 La Gomera has 650 kilometres of hiking trails. If you consider the island is only 22 kilometres across, you’ll have some idea of the extent of the hiking infrastructure. Much of it is focussed in the Garajonay National Park, which sprawls out like a starfish from the centre of the island. It is named for the ‘Alto de Garajonay’, La Gomera’s highest point, but is largely centred on the extensive and ancient Laurisilva – or laurel forests.

The Canary Islands are regularly subjected to the calima winds – hot, oppressive and dust-laden weather which rolls across the sea from the Sahara. More often than not however, you’ll feel the cooler, northerly trade winds, which can create spectacular cloud inversions. Even more impressive is the collision of these two weather systems - watching clouds spilling like waterfalls over the ridges onto the southern slopes, like a timelapse sequence from Planet Earth, is a sight you’re unlikely to forget in a hurry. 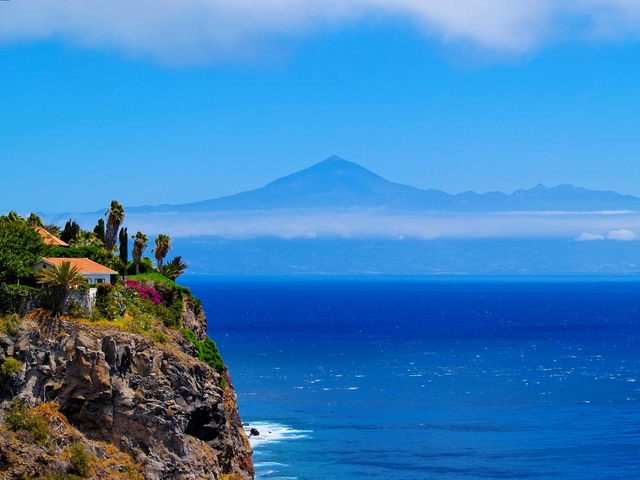 It’s the damp, northerly winds which created the forests of the Garajonay National Park, where I find myself hiking on a blistering hot July morning. Thankfully, the air here is cooler and wetter, a phenomenon which encourages the extensive growth of piercingly-green lichens – much more vivid and alive than the greyish old man’s beard we’re accustomed to in the north of Europe.

This effect – combined with a mist that often hangs in the air from the trade wind clouds – makes for a mysterious and other-worldly ambience, as if you’ve stepped into Jurassic Park. It’s small wonder La Gomera is known as La Isla Verde – the green island. 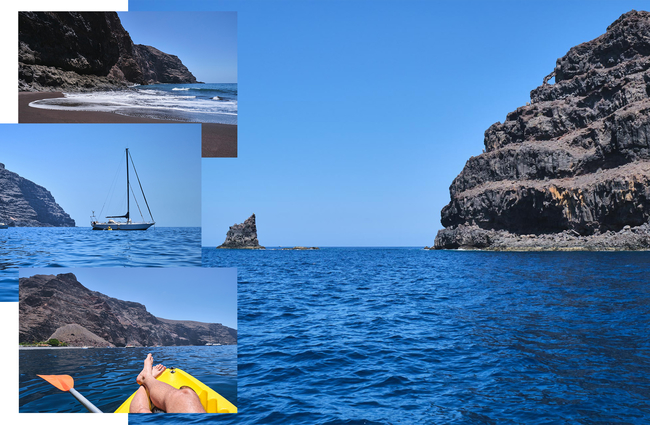 Crucially, the winds also make walking in this forest feel as refreshing as a dip in the ocean. The micro-climate and altitude combine to create an average annual temperature in that’s fully 10 degrees lower than that on the coast. Quite remarkable given the size of the island.The National Park is teeming with trails, and they seem to cross each other endlessly, making it a wonderful place to follow your nose, and wander wherever your fancy takes you.

Because the Canaries were formed by volcanic activity in situ, they were never attached to any mainland, so there are no native mammals, and no snakes on La Gomera. Goats roam free, and rodents, of course, have hitched rides here on ships, but when it comes to indigenous fauna you’re looking at Laurel Pigeons (endemic in the Canary Islands) and the ubiquitous Canarian Chaffinch. 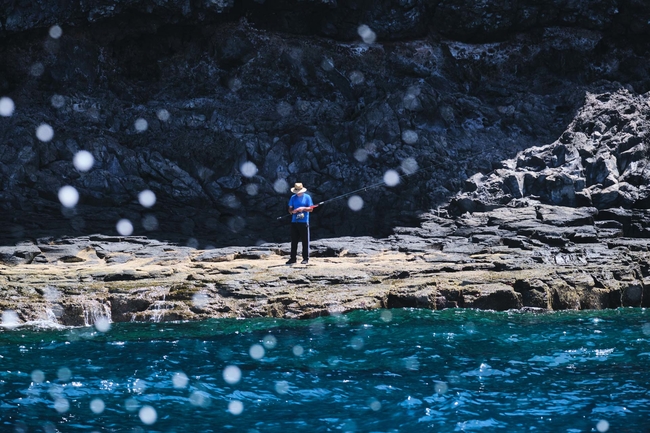 Compared to the lush northern sector, the southern half of the island is scorched and barren – well in mid-summer it is anyway. I’m told the tabaiba plant, a kind of rooty structure resembling a cast of the human lung, sprouts green leaves, which add life to the rocky slopes in spring. In July however, they appear as sun-bleached skeletal forms.

On the western side of La Gomera is an area that appears to straddle the north-south divide, and it’s here we go hiking on one of the hottest days of the trip. We’re high above the Valle Gran Rey – the name of both an enormous valley, and the coastal town at its foot – on one of those towering ridges I’d been longing to traverse. It’s a wonderful blend of sandy-coloured rock and dust, broken by the occasional lone palm or tabaiba bush, and every now and then, an incongruous group of deciduous trees, defying the arid conditions around them. 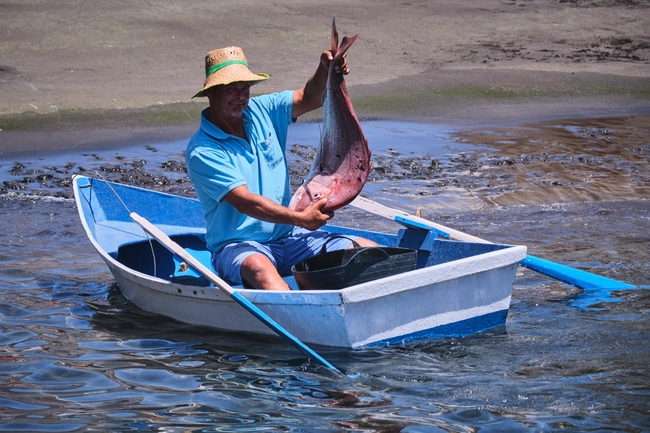 The hike starts when we leave the road  near the town of Arure to join a section of the GR132 – one of the Grand Randonée routes popular all across Europe, which circumnavigates the entire island. My guide Juan Carlos tells me it’s rare this route to be completed in full these days, due to climate change. The winters are less cool year-on-year, and the need to carry up to 10 litres of water per day (there are few refill points in places) is making the route increasingly difficult.

Today, we only have to make it as far as the sea, a fact I’m hugely grateful for, as the sun is merciless. After a couple of kilometres, the way narrows and the ridge sharpens, and we get a close-up look at the geology of La Gomera. There are several places where the land looks like it was built by giants; regular-shaped rocks are piled up in discernible patterns, and in some places straight, flat walls jut out of the ground. 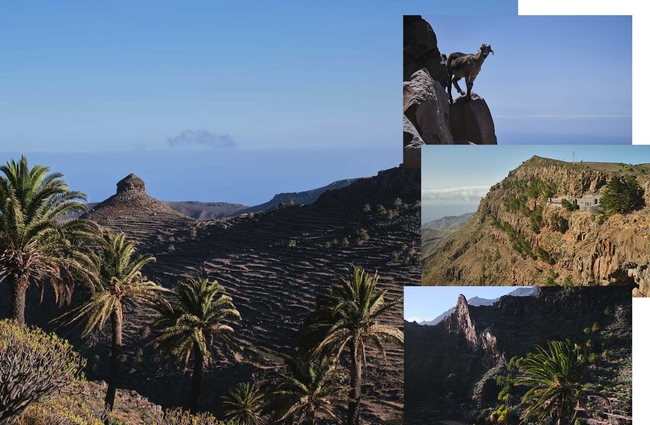 The steep top of the ridgeline shades us for a time, until we reach a great expanse of empty land, which slopes down gently towards the cliffs. It looks bizarrely like a prarie, except that you’re hundreds of metres above the Atlantic Ocean. Beyond are the sea cliffs; plunging 600 metres downwards to Valle Gran Rey.

The town itself is bursting with character, with colourful street art, hippy boutiques and some lovely beachfront bars and restaurants. We start our hike late in the day to avoid the worst of the sun, but it turns out there’s another advantage too - when we arrive, it’s just in time for cocktail hour.

The western aspect of Valle Gran Rey makes it the perfect place for a late-finish. Cool cocktails, tuna caught that very day, and the fading light of the setting sun. La Gomera may be wild, but it’s wonderfully civilised too. 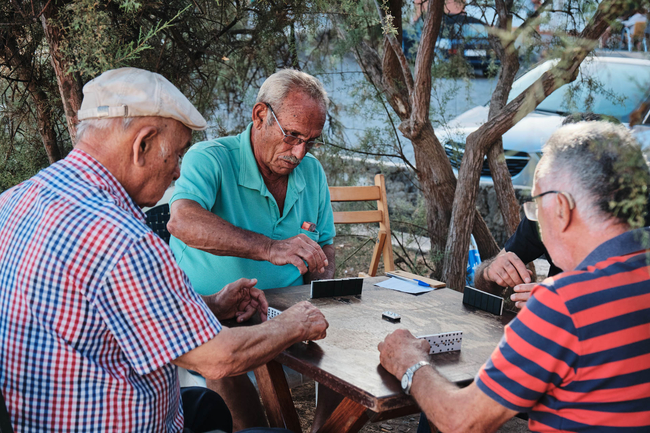 In the summer months, the sun and heat are the main threat to health and safety; take normal hot-weather precautions.

Clothing for a summer holiday, plus a couple of extra layers for travelling into the hills and a waterproof jacket; the laurisilva is technically rainforest! Walking boots or approach shoes are advised - just make sure they’re waterproof and breathable

I stayed at the Parador de la Gomera in the capital, San Sebastian. Accommodation choices are very limited in comparison to the other Canary Islands, but the Parador is superb - bursting with charm. Its location, high above the harbour - takes some beating too. Highly recommended. 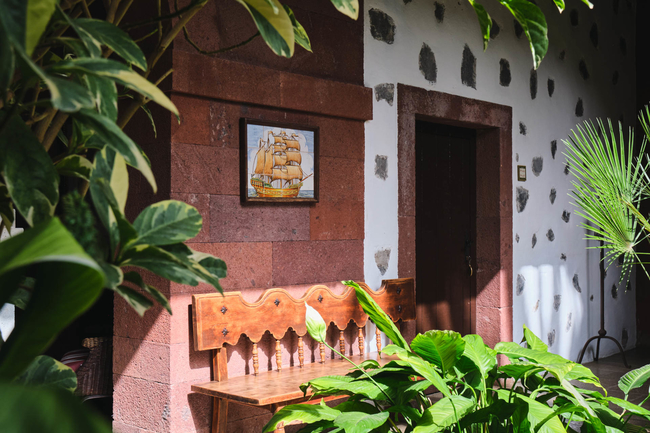 Flights from the UK to Tenerife are easy to find, but the onward journey is less obvious. I flew to the tiny La Gomera airport, but the ferry from Los Cristianos (Tenerife) is just as quick, substantially cheaper, and better for your carbon footprint.

There are busses, or you could rent a car. The island is only 25km across but the drive from east to west takes well over an hour due to the windy roads.

Naturally, seafood is big in La Gomera, and tuna is a specialty. The best place I ate was in the hotel Parador de la Gomera in San Sebastian: 30 centimetre-long octopus tentacles, plus the incredible Cabrito – young goat roasted slowly with aromatic herbs. 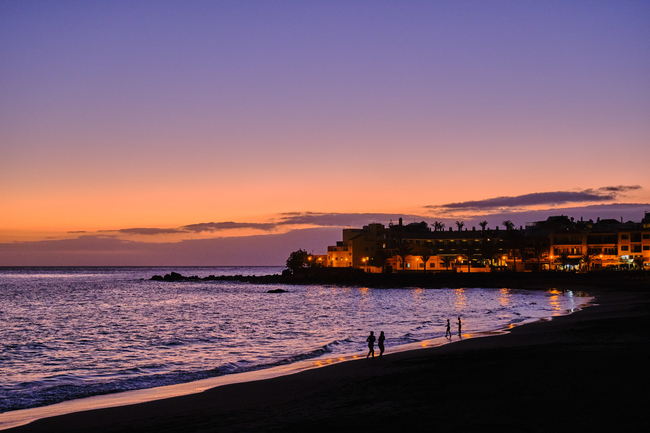 Dan's trip was funded by La Gomera tourism. See lagomera.travel for more info, and follow them on Instagram @lagomeratravel

Dan Wildey is a contributing photographer for Active Traveller. Follow him @wildeymedia