When "all this" is over, we're going to need a bit of R&R. Which is why we’re revisiting our selection of eight of the most amazing glamping locations in the UK.

Featured on George Clarke’s Amazing Spaces on Channel 4, the Sky Den is set in the heart of the Kielder Water and Forest Park, where, with a river running below, this conceptual treehouse consists of three shaped spaces which blend together for optimum function. 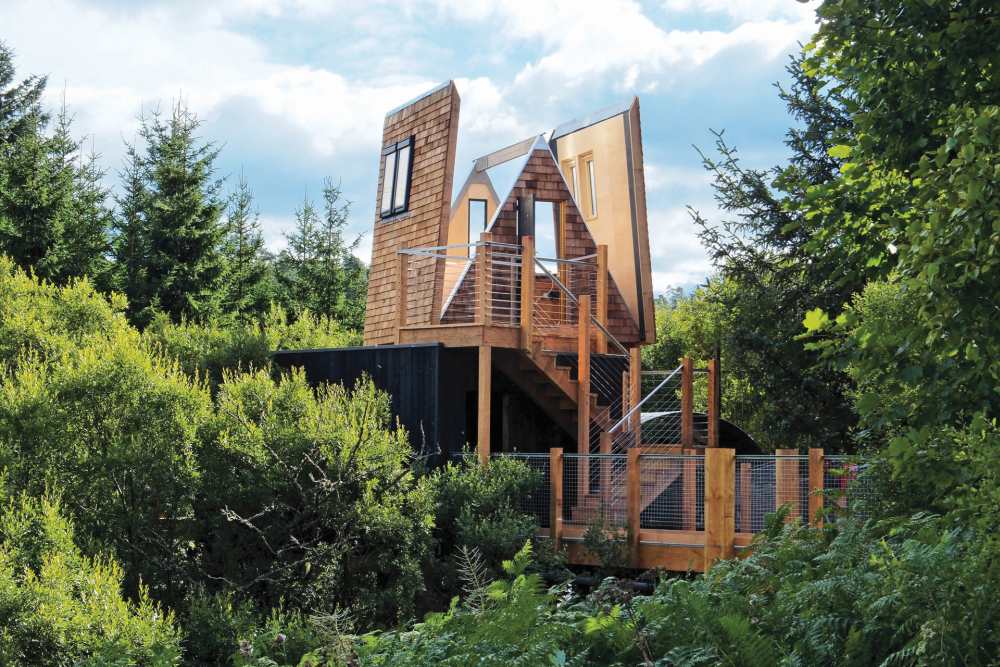 These spaces are the square main living space, with its ingenious fold-away interior and kitchen; a circular balcony accessed though glass doors; and the triangular loft space – the whole roof of which opens out on clear nights to display Northumberland’s unpolluted night sky.

Nature abounds here, with 70 percent of the UK’s red squirrel population as well as ospreys. Nearby is the Park’s main activity centre, with watersports, rope courses, orienteering and more.

Nestled in the picturesque South Downs National Park, Blackberry Wood is no ordinary camping destination. Sure, you’re welcome to come and pitch your own tent in their cosy little private woodland glades, light your own camp fire and cook your own food on the provided grills, but the real glamping highlights are a red London double-decker ‘Holiday Bus’, a ‘Holicopter’, a gypsy caravan, and a beautifully designed wooden ‘Curvy Cabin’ – all of which have been expertly and inventively converted to offer comfortable and unique accommodation for a variety of group sizes. 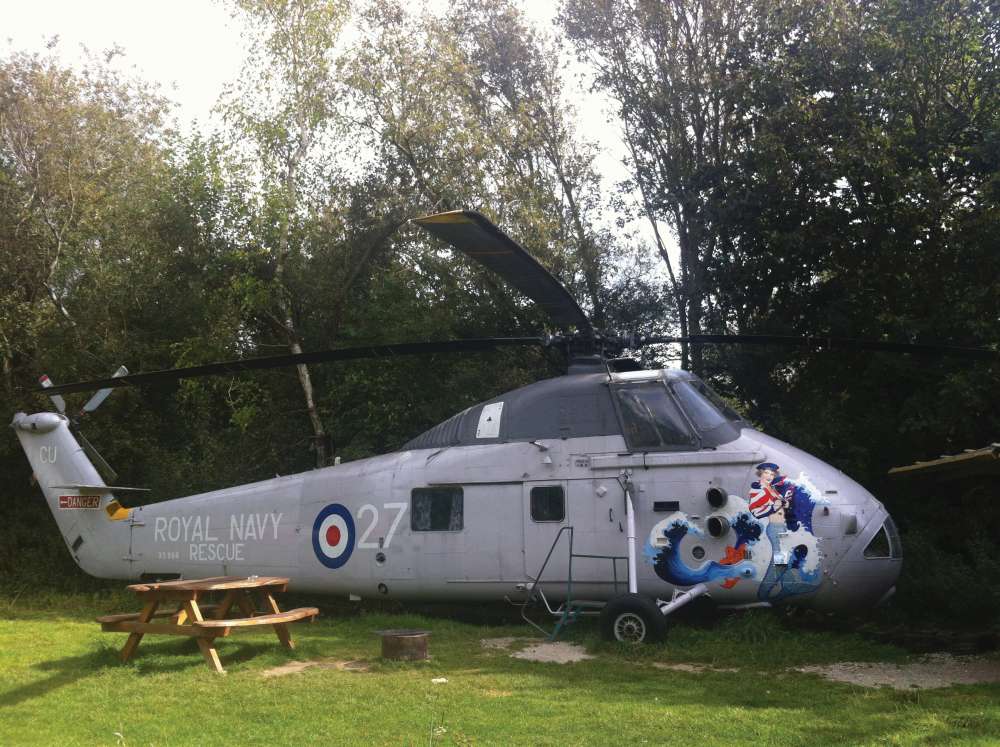 Some 25 minutes from Brighton seafront, in the middle of the beautiful Sussex countryside and surrounded by public footpaths and bridleways for you to explore, this site will capture the imagination of big and little kids.

If you want to truly get away from it all but stay within the British Isles, just, then Wigwam’s self-catered wood-built camping pods at Mangersta Croft will certainly deliver. Five minutes walk from the towering cliffs, white sands, rock pools and challenging surf of Mangersta Sands, in the 13-house village of Uig, these camping pods are immersed in one of Britain’s few remaining wildernesses. 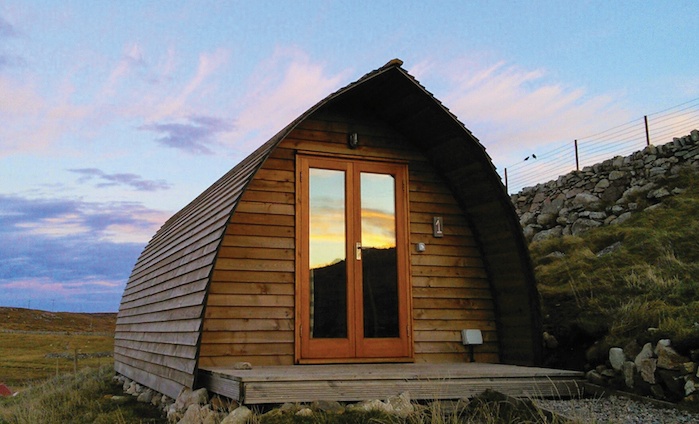 Cosy and warm, with its own shower, water heater, mini kitchen, and electricity, each Wigwam even has its own TV. Don’t get carried away though, there’s no signal here, you’ll have to bring some DVDs.

But with so much wild beauty outside your window – from dramatic cliffs to rugged hills, where eagles soar and red deer roam, and star-filled skies at night, the gogglebox is not going to tempt you.

Pushing the glamping envelope almost to bursting, this luxury tree house only qualifies as glamping and not a hotel room because you access it over an Indiana Jones style rope bridge and share its luxury wooden interior with a mature oak tree. 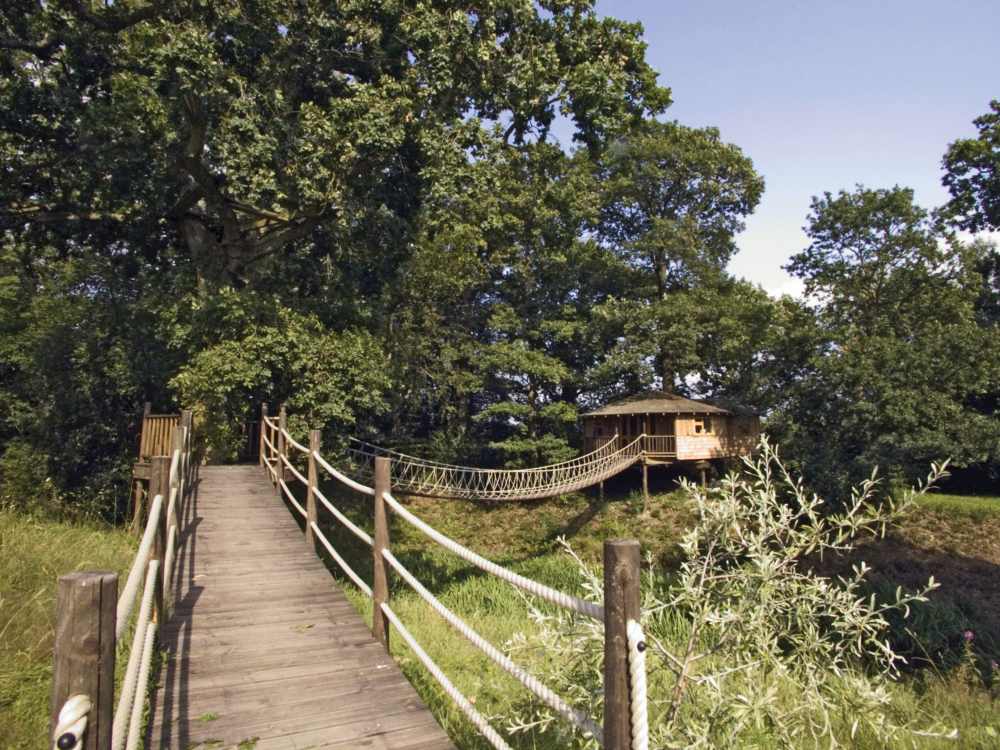 Outside is a private deck overlooking some of southern England’s finest rolling fields and woodlands, where you can eat breakfast with the squirrels and birds before exploring the farm’s 44 acres. No kids or pets – this is for couples only.

On the cliff tops above one of Pembrokeshire’s most beautiful beaches, Manorbier Youth Hostel has an exclusive location for inclusive prices. 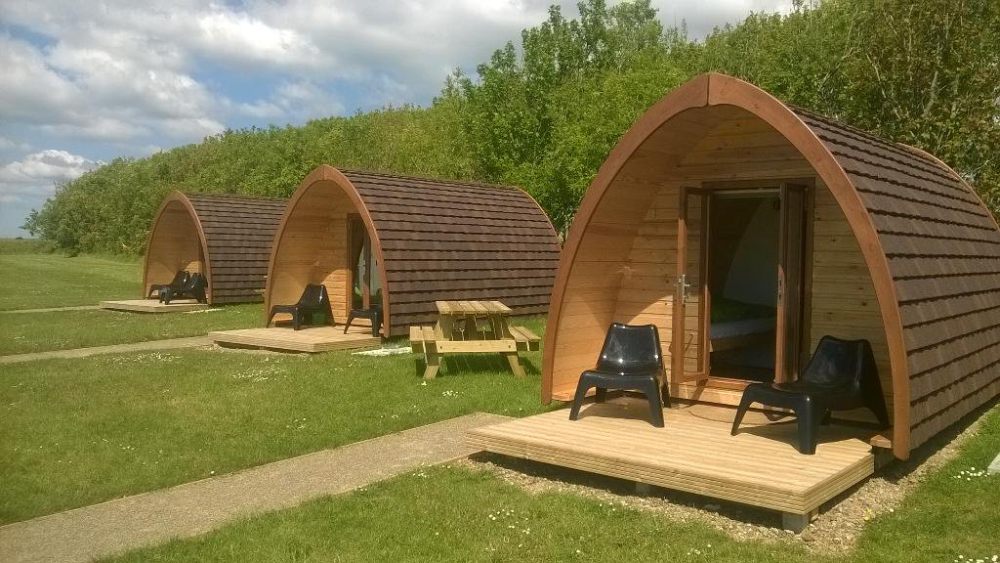 The hostel itself was refurbished last year and has 70 beds including rooms for couples, families and friends – half of which are ensuite. But for those who want a bit of private ‘inside outdoors’, the hostel now also has three large heated camping pods, which sleep up to four. Stay in them and you still get full access to all the hostel’s facilities.

Great for surfers, families, and walkers, Manorbier YHA not only has great views and access to the beach but the Pembrokeshire Coast Path runs right past it, making it an ideal stop-over or base to explore some of the stunning 186-mile walk.

Taking the concept of tree houses to another level, the aluminium and steam-bent green ash spherical main chamber of the Red Kit Tree Tent was a TV star in George Clarke’s Amazing Spaces. And rightly so. 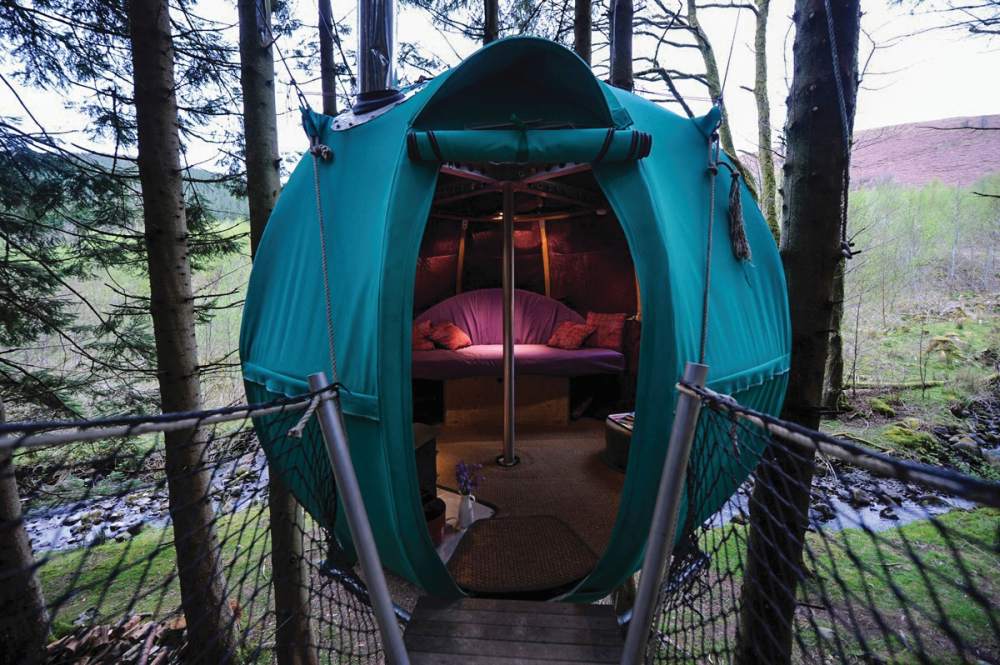 Suspended by tensioned steel wires in the pine tree canopy, the ‘tent’ contains a double bed and wood-burning stove, while behind the sphere is a deck with chairs, a table and an outdoor cooking space.

Almost as special as the tent itself is the location, which you’ll find at the end of a long singletrack lane through the Welsh forest, with a stream babbling below, and red kites soaring above in your own personal 80-acre woodland.

Just four miles from the sandy beaches of Three Cliffs Bay, in a private meadow opposite ancient woodland, this luxury yurt is a fantastic getaway for up to six. 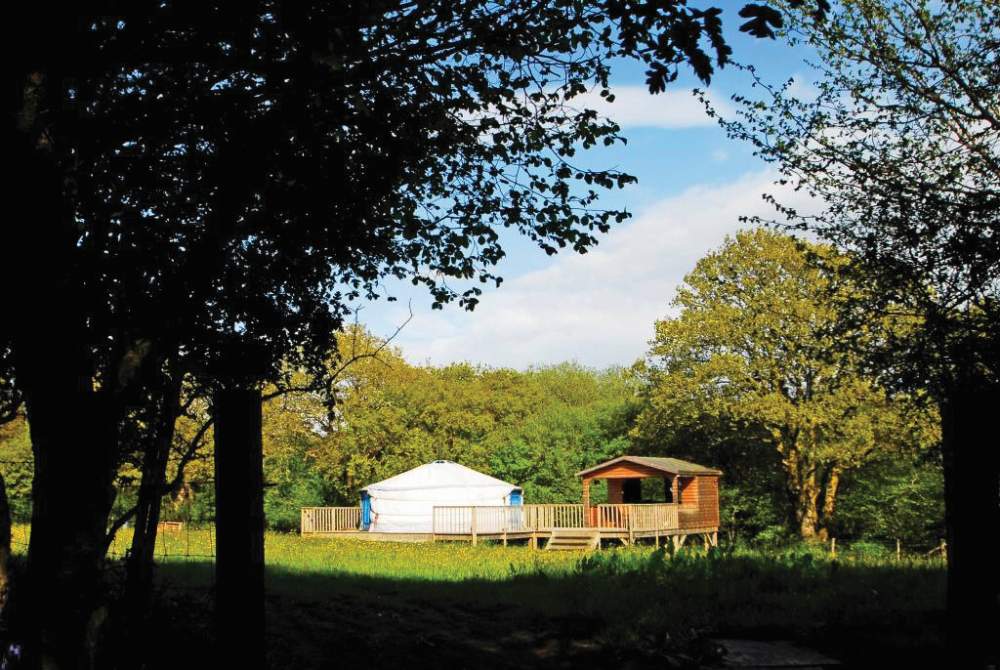 Heated by a log burner and a sizeable 7m in diameter, it sits on a private deck, shared only by a log brazier which doubles as a pizza oven. It also has its own equipped kitchen and dining area under an open-sided roof.

With a private but separate composting loo, facilities are simple. The Shiva and Shakti yurt 40 metres away share a washbasin, hot shower and flushing loo in a cottage 400 metres away.

Sitting next to a stream on a campsite between the Cornish town of Porthtowan and the fantastic surfing beaches of Portreath is Gertrude, a converted Horse Box. 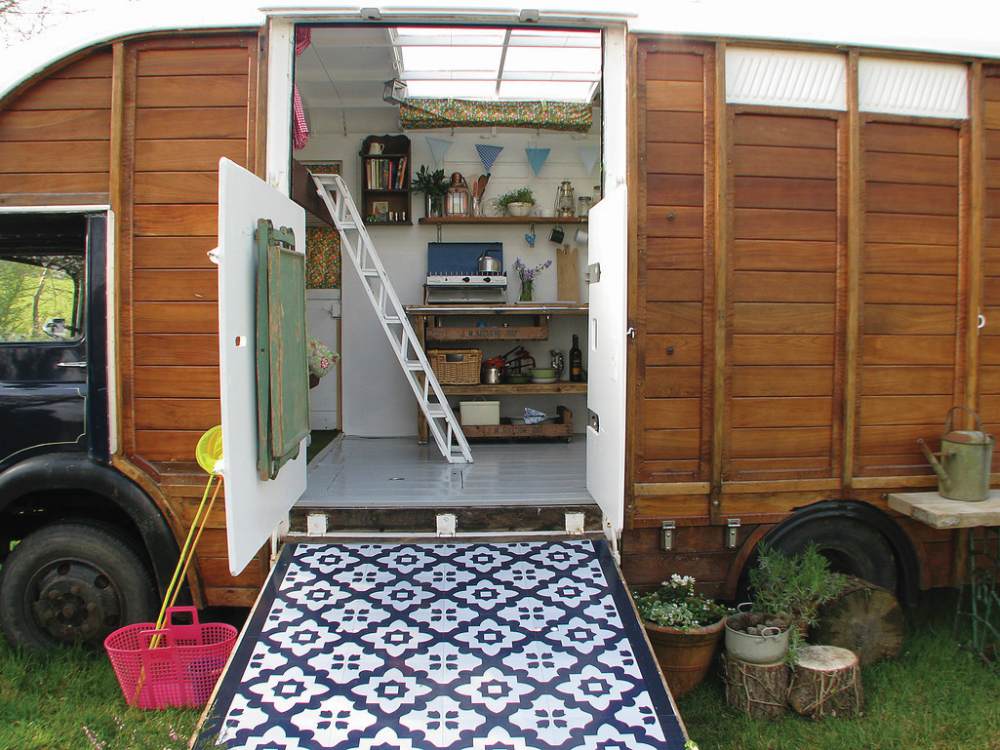 Decked out in vintage style, with a kitchen, a king size and two bunk beds, as well as a wood burner, Gertrude can house two adults and two children in cosy comfort.

The Elms Farm campsite itself is wifi-free, and they say the only ‘logging on’ will be the ones provided for the brazier. With the Bissoe cycle trails and cycle hire almost next door, linking into the coast-to-coast cycling route, Gertrude would make a great base for Cornish family cycling adventures.