The Best UK Beaches in Winter

We have a wealth of spectacular coastline and countless beautiful beaches in the UK, and the big oceans of winter only add to the sense of drama. We pick out some of the best to explore at this wonderful time of year.

Winter might not immediately seem like the most sensible time of the year to embark on beach adventures, but such is the huge diversity and beauty of the UK coastline, you’d be mad to miss out on an opportunity to wander these shores during the colder seasons - not to mention the fact that you're likely to find them crowd-free after the summer holidays are over. Winter allows you to get closer to the coastline and the beaches in their natural state, and sometimes even have a beautiful slice of coast all to yourself. During winter, large bays can often feel like expanses of wilderness, and there’s something comfortingly primeval about standing in a howling gale looking out to sea and the crashing waves beyond an empty bay.

With winter storms in full swing along much of the UK shoreline, now’s a great time to head to the coast. Most beaches in the country are open all year round, but it’s always worth checking with the landowners (such as the National Trust) if you’re not sure. Bear in mind that beaches in winter aren’t staffed by any lifeguards to help you out if you do decide to take a dip in the sea.

Another great benefit of visiting our most beautiful beaches in winter is that you'll be helping to invest in local communities and economies by visiting during the off-season. By embracing winter on the beach, wrapped up warm and with the promise of great local food and a warming pint in the pub afterwards, you’re helping to keep these rural areas thriving and cared for all year round.

Where is the most beautiful beach in the UK? With thousands of miles of British coastline to explore, it's hard to pick the very best beaches in Britain, but we've tried. From vast expanses of clean white sand to special sheltered island bays, we’ve put together a collection of spots from all corners of the British coastline that are well worth a seaside visit over the winter season. 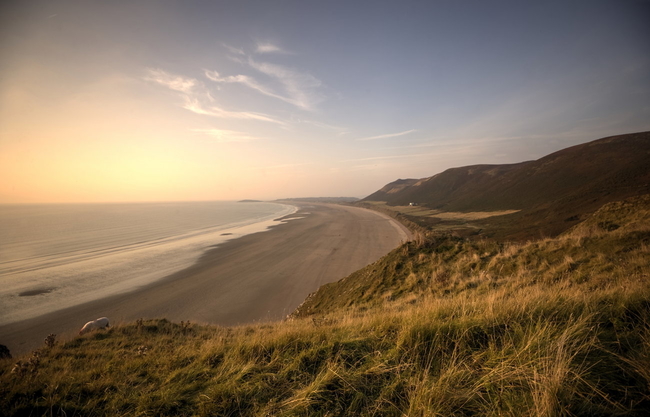 Rhossili Bay in south Wales is famous for its three miles of sands in a huge curving bay and for the highest point on the Gower Peninsula, the Beacon, which sits behind the sand. This area of the peninsula is within the first Area of Outstanding Natural Beauty in the UK, and the beach regularly tops lists as one of the most beautiful beaches in Europe. It’s particularly appealing in winter, as the sense of space at low tide can make you feel like you’ve got the whole place to yourself. It’s popular with surfers all year round, and even through the winter it’s a good place to head to catch some waves, or to watch surfers braving the cold. 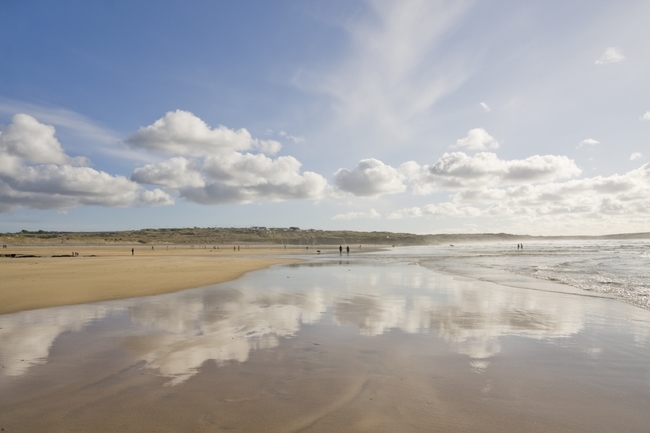 Another popular surfing beach, Godrevy Beach in north Cornwall often feels the full force of Atlantic storms during the winter, so not only is it a great place for a winter beach walk, it's also a popular spot for keen wave watchers. Situated in St. Ives Bay, the world-famous Godrevy Lighthouse is always in sight, with winter waves often crashing over its 26-metre tower, which sits three miles out to sea to warn ships of the infamous Stones Reef. You'll find a car park and good facilities at Godrevy all year round. and the beach is a great place to spot wildlife, with seals nestling in some of its sheltered coves and a variety of seabirds like oyster-catchers and and cormorents choosing to make the beach their home. 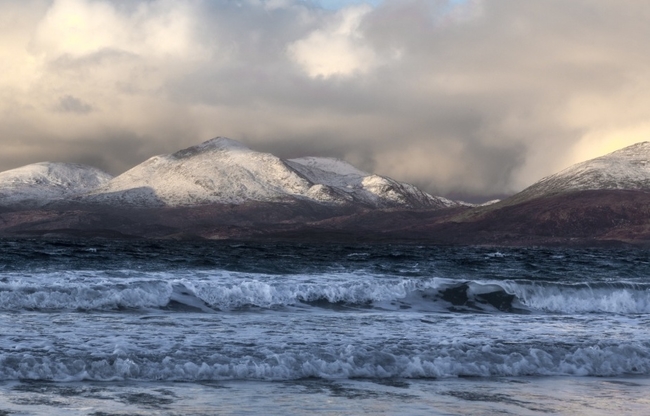 The Isle of Harris, alongside its neighbour Lewis, is the largest island in Scotland's Outer Hebrides and is also home to one of the most famous beaches in the area. Just getting to this beach is an adventure itself, such is the isolated nature of the Outer Hebrides, and the weather here can be some of the most severe during winter in all of the UK. Luskentyre is one of the most remote beaches on this list, and one nice thing to do, even in the depths of winter, is walk or cycle the singletrack road that links the beach with the island's main road. There aren't many places better than Luskentyre to escape the madding crowds in winter. 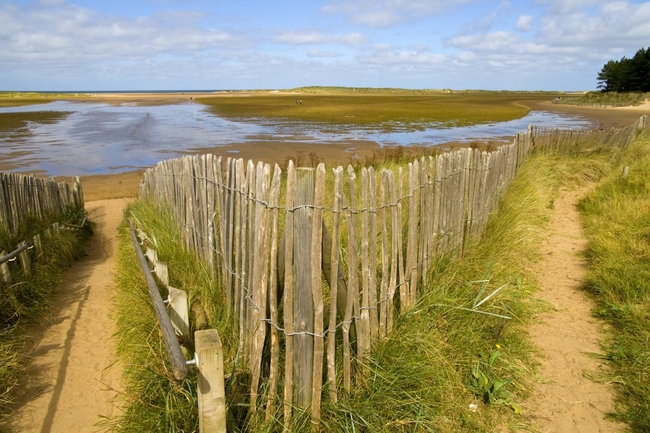 The Holkham National Nature Reserve is one of the largest in the country, and this vast expanse of beach at its heart is often voted as one of Britain's best. At high tide, a unique lagoon is formed in a natural basin towards the back of the coast and a newly erected lookout area within the nature reserve itself provides a perfect opportunity to escape the bracing winter weather momentarily while looking out on the vast expanse of the beach beyond in search of great views and local wildlife. 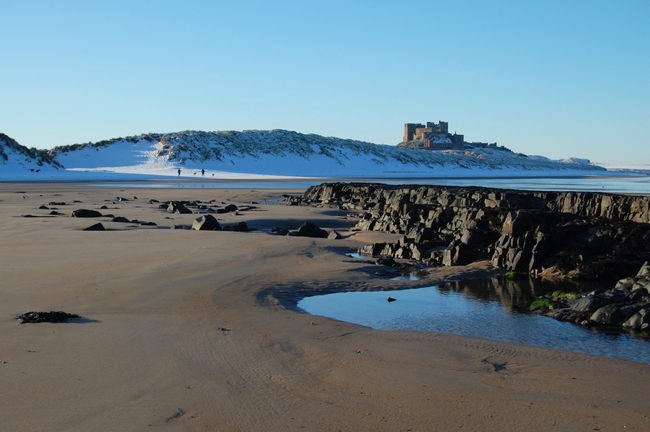 The Northumberland coastline is peppered with remote, isolated, windswept beaches, and Bamburgh stands out for its impressive Norman castle overlooking this wild stretch of North Sea shoreline. The northerly section of the beach has a small lighthouse and numerous rock pools, and the sand dunes behind the coast are designated as a site of special scientific interest due to the flora and fauna they're home to. It's a great place for long walks, and the backdrop of Bamburgh Castle makes the beach even more dramatic in winter. Fun fact - the world's first lifeboat was built and tested at Bamburgh beach. 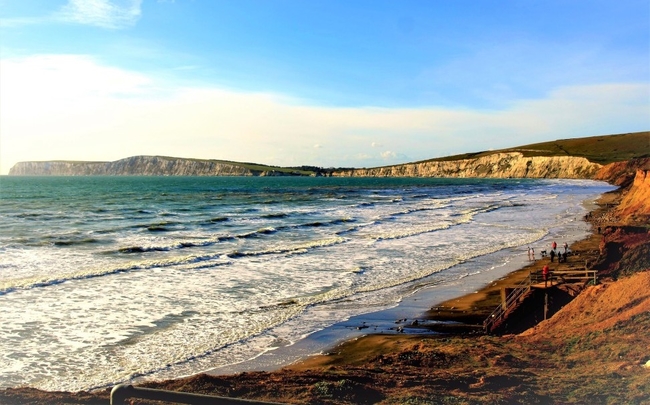 Compton Bay is a two-mile stretch of sand on the Isle of Wight with an impressive backdrop of multi-coloured sandstone cliffs. It may be famous for its beauty, but it's surprisingly quiet in winter. History buffs should put this at the top of their beach wish list - fossil hunters frequently visit the bay, and the fossilised footprints of prehistoric creatures are visible here at low tide. Compton Bay is a quiet beach and it has very little in the way of formal facilities - which makes it all the more attractive during winter. There are National Trust car parks at either end of the bay, which means the sandy beach isn't too difficult to access. 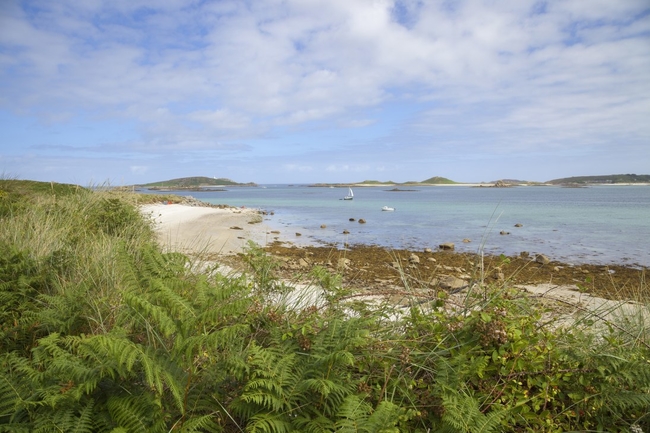 There's a special magic to small islands in the winter, and the famous white sands of the island of Tresco's beaches are perfect in cold weather, as you'll largely have them to yourself. Pentle Beach is sheltered and framed by low white sand dunes backed by marram grass, so even when the wind is whipping around the northern shores of the Isles of Scilly it's likely there will still be a spot in the south to sit and admire the view of the Eastern Islands and St Martins beyond. At low tide there's a large sandy expanse to walk along, and the bay itself is only a short walk from the island's only pub, which makes a perfect stopping-off point on the way back to the jetty.

The big skies and flat landscape of this part of Sussex make it one of the most special places in Britain if you're after long sandy beaches to explore in winter. An expanse of sand dunes to the rear of the beach are an impressive sight, and this beach is a proud holder of the Blue Flag award for the cleanliness and safety of its water, which acts as the entrance to nearby Chichester Harbour. 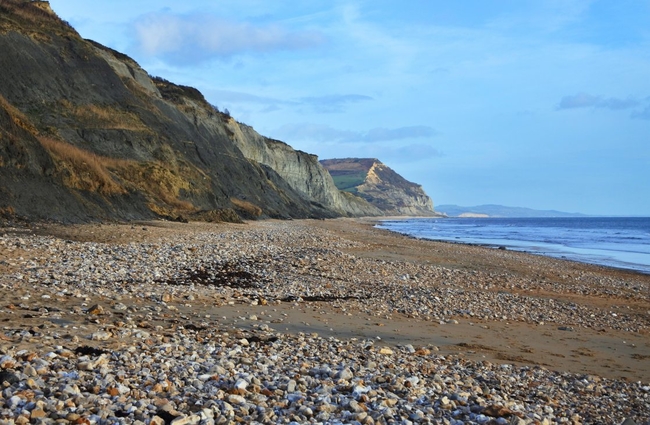 Although busy with buckets and spades in the summer, Charmouth Beach in Dorset takes on a life of its own in winter and becomes wild and isolated, party due to the dramatic cliffs to the east side of the beach. The beach itself is split into two sections - east and west - with the latter having a large flat area of sand at low tide where it's possible to walk all the way down the coast to Lyme Regis. The east section has small pebbles and finer sand, and the water is more popular for swimming. If you're wandering here in the winter, play close attention as relatively frequent landslides have been reported. 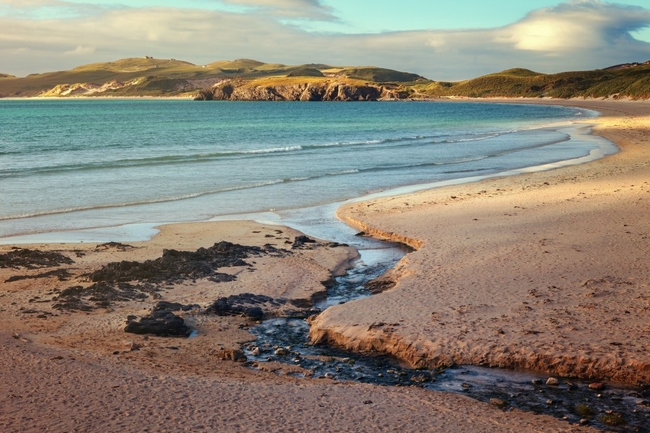 Situated in the very north of Scotland near Cape Wrath, Balnakeil is one of the most wild portions of the British coastline. The drama of the landscape, its weather and the beach's setting can make it a brutal place during winter, but its beauty is undeniable, and the white sand and large bay are often quiet no matter what time of year you choose to go. The colour of the water, like in many of Scotland's bays, is a bright shade of blue that only adds to the drama of the landscape when black clouds and rainstorms are passing by.