We put 5 lightweight camping stoves to the test to see how well they performed, read the reviews here. 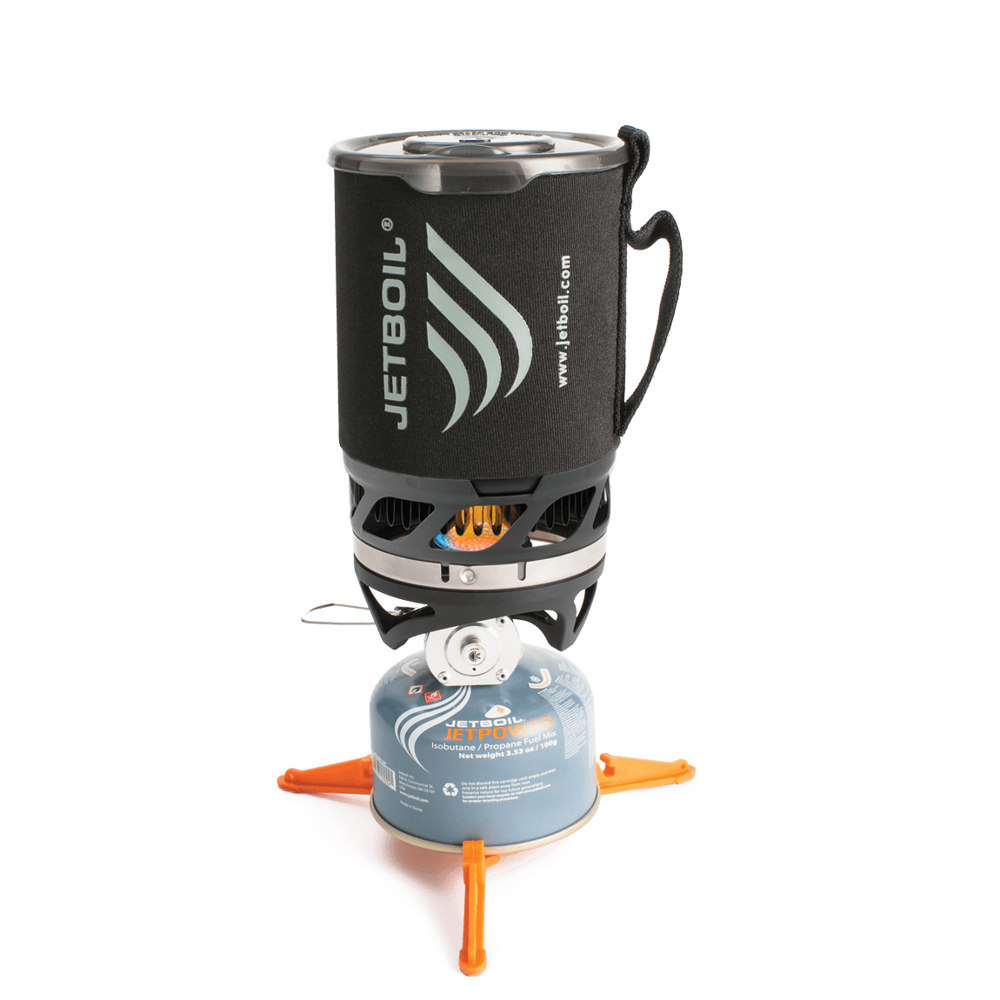 The Micromo is the little sister to the popular Minimo stove. It comes equipped with a .8 liter FluxRing cooking cup which is shrouded in an insulating cozy so you don't burn your hands when picking up the pot. It's designed for backpackers who are looking for a simple, reliable all-in-one solo cooking system for camping.

The Micromo lights from a built in Piezo ignitor which is placed in a bit of a fiddly area but works well. Simmer control is excellent, allowing precise control of the flame and, although it doesn't have a particularly ferocious burn the Micromo boils water in ridiculously quick time at just 2 minutes 15 seconds for .5 liters. This makes it the quickest of any of the stoves on test and proves that Jetboil's heat exchanger technology works.

The well-designed fuel canister stabilizer does a reasonable job of keeping the Micromo upright, but it's still a tall and thin package and therefore susceptible to tipping over.

The lid can be used to drink through and doubles as a strainer for pasta or noodle meals and the optional coffee press combo is a neat touch that can add a little luxury to wild camping trips.

The stove is neat when packed with everything, including a 100g fuel canister easily fitting into the .8 litre cooking cup.

The overall impression of the Jetboil is one of a hassle free all-in-one cooking solution, you'd expect some weight penalty for this but the Jetboil Micromo is actually very reasonable at 370g, which is not far off the 314g of an Optimus Vega stove paired with an MSR Titan Kettle. 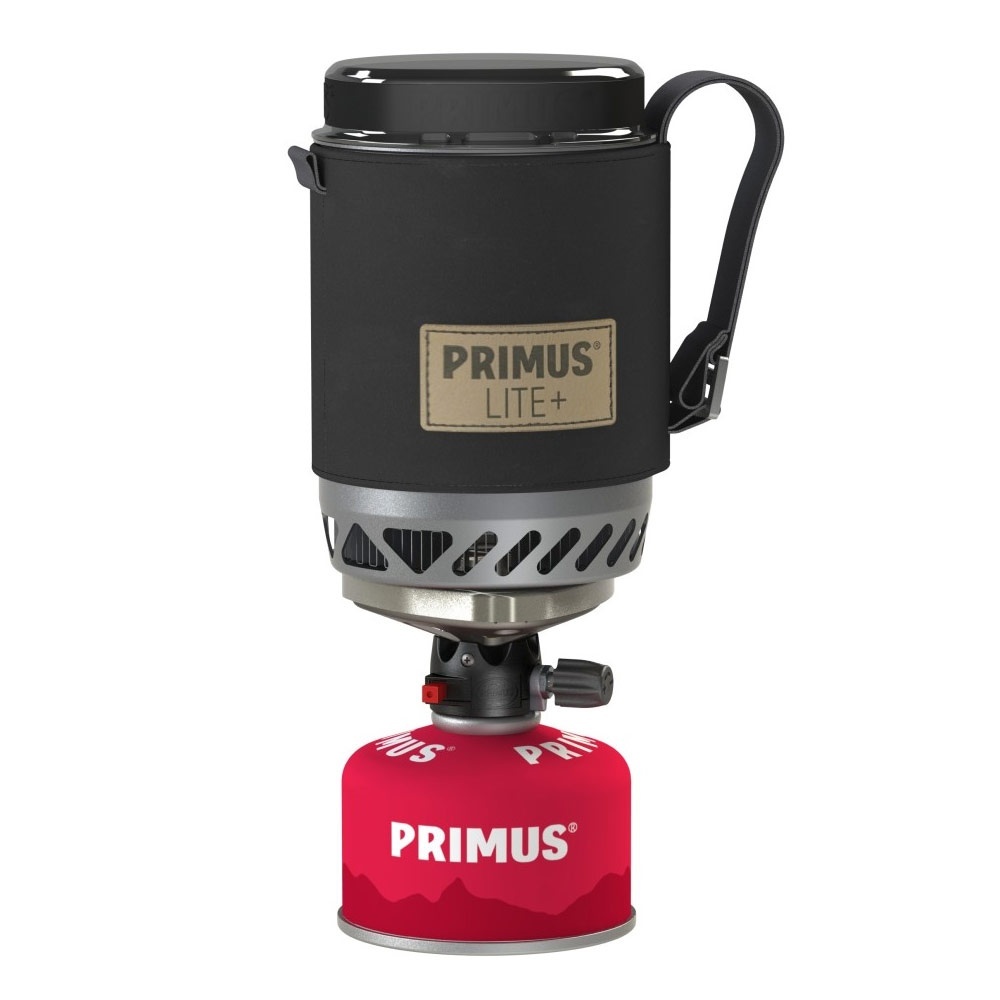 Best for those that appreciate solid build quality and versatility.

The Lite+ feels and looks like a pumped-up version of the Micromo, with more bells and whistles included as standard.

The locking system between pot and burner is very Swedish like in its design - chunky, sturdy and stable.

The fuel stabilizer is a bit less 'stable' and annoyingly doesn't fit into the pot when there's a fuel canister in there but you can still get a good purchase on slightly uneven ground and, unlike the Micromo, the Primus comes with a hanging kit.

In fact, the stack of features and accessories included as standard with the Lite+ is impressive, in particular we loved the simplicity of the three screw in studs for use with other pans, you lose the benefits of the heat exchanger and there's no real wind protection but we've still happily cooked group meals using this set-up.

The handle is well designed and comfortable for cup holding but also doubles as the securing mechanism for the lid when packed and the neoprene sleeve stops you burning yourself when you're drinking a brew.

We've achieved boil times of 2 minutes 45 seconds with the Lite+ which is fast, it's also efficient thanks to the heat exchanger.

An overall weight of 440g is reasonable for a stove with such chunky build quality, but if you're all about ultralight hiking or mountain marathons then your money is perhaps better off being spent elsewhere.

If weight isn't your primary concern but a solid build quality and versatile, hassle-free stove are, then the Lite+ is a great option. 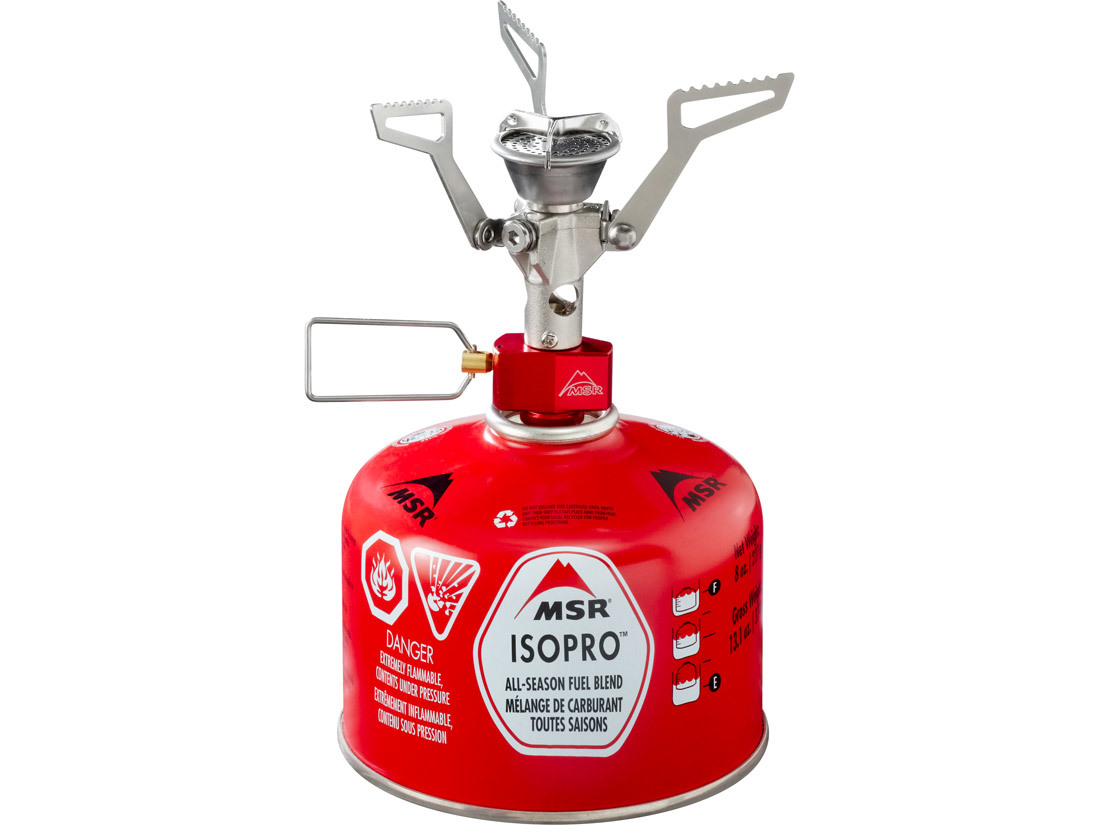 The strength and rigidity that MSR have managed to design in to the pot supports is impressive. You can happily cook with a full 2 litre pot without fear of the stove caving under the weight.

After use, the pan supports fold down making for a tiny pack size, barely bigger than a golf ball. This, and the low weight of 76 grams puts the Pocket Rocket 2 firmly in 'ultralight' territory. Paired with one of MSR's excellent titanium pots you're on to a serious winner if gram counting is your thing.

The burner on the Pocket Rocket is good, boiling .5 litres of water in a little over 3 minutes, this doesn't match the efficiency or speed of a stove complete with heat exchanger but it's still decent.

As with any other pared down stove stability is a concern, with the gas canister providing all of the support for the pan above. If you're worried about this and aren't used to cooking on a simple stove like the Pocket Rocket then we'd recommend investing in a canister stand for around a tenner.

At £30 this stove is an absolute bargain, and although not as hassle free as the all-in-one cooking systems it has proven itself to be a trusty companion for fast and light adventures. 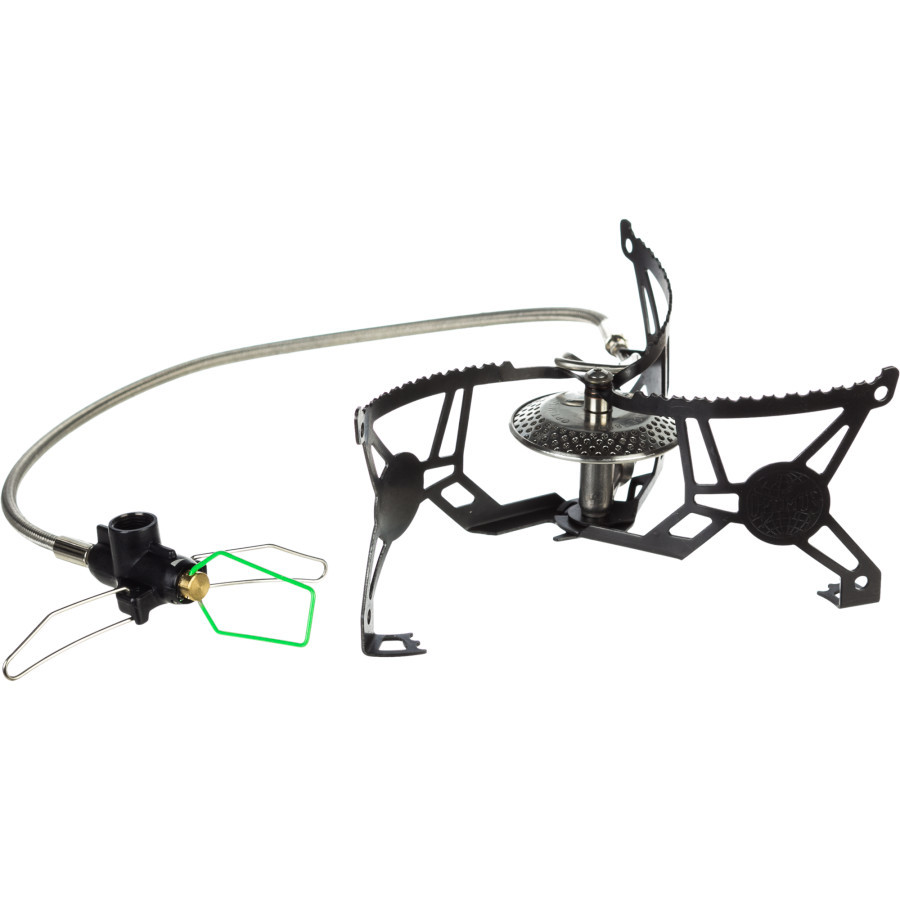 The Optimus Vega is a serious bit of kit for serious adventures. If ski touring or winter adventures are your thing then you're going to need a stove that operates at low temperatures, for this you need to provide liquid gas to your burner by inverting the canister. The remote canister valve housing on the Vega allows you to do just that, and the integrated stand means you don't need to prop up the canister or pick it up to adjust the flame.

The burner on the Optimus Vega is absolutely ferocious, so much so that we found it to be almost as fast at boiling water as the Jetboil and Primus stoves, although it's not quite as efficient so will use more gas in the process.

The large fold-out legs/pan supports with their serrated tops coupled with a low centre of gravity make this one of the most stable stoves we've tested, a 2.5 litre pot of pasta caused the Vega no problems at all.

The stove comes supplied with an aluminium heat shield big enough to provide good protection from the wind. It isn't hinged so will stress and fatigue at the fold points eventually but is lightweight and can be folded up to fit snugly into the stuff sack along with the stove.

The total weight of the Optimus Vega, complete with bag and heat shield is a respectable 174g, coupled with great performance this made it one of our favourite stoves on test. 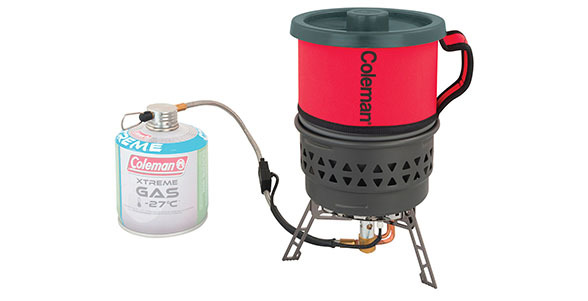 Best on a budget

The Fyrestorm PCS is relatively new to Coleman's range and is their first attempt at an all-in-one cooking system. Coleman have opted to go down a different route to Jetboil and Primus though, using a remote canister and doing away with the heat exchanger.

On the plus side, this means that the Fyrestorm PCS is a lot more stable than the Jetboil and Primus stoves, with a lower centre of gravity and strong metal feet, but the lack of heat exchanger means it doesn't cook or boil as quickly.

Having said that the burner is well designed and both powerful and efficient for what it is and the windshield in the stove and in the base of the pan both work well in gusts.

The remote canister can be inverted for use when it's really cold but there are no canister supports when used in this configuration and consequently the burner adjustment is hard to get to.

The pot that comes with the system is a generous 1.3 litres so could be used for two people and the neoprene sleeve stops you getting burnt when you pick the pot/cup up after cooking or making a brew. Although the stove is designed to be used primarily with its own pot it has the versatility to be used with other pots without having to buy extra accessories to make it happen. The pot can house a Coleman C300 gas cartridge but we found that we couldn't squeeze in an MSR Ispopro 113g cartridge, perhaps because of the differences in shape rather than size.

The piezo ignition is in-line which makes it less fiddly to use than those that are housed on the stove base but we found that it often took a fair few clicks of it to get the burner to light.

The weight is a fair one for a system of this size at 598g but the size of it might put some solo backpackers off.

One of the main draws to the Fyrestorm PCS is bound to be its price, which at £65 is attractive considering a decent pan of that size will cost you upwards of £15 alone. 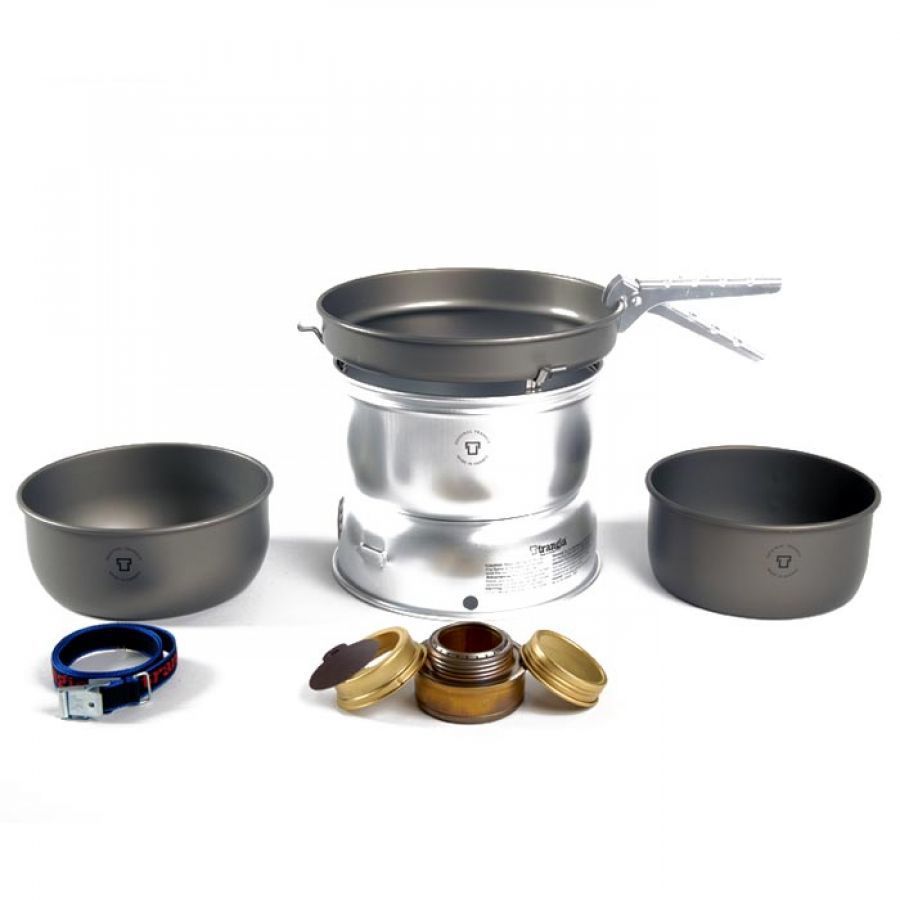 The only non-gas stove on test, the legendary Trangia stove uses standard Methylated Spirits or Bio-ethanol as its fuel source.

The Trangia feels like a much more bushcraft friendly way to cook than a modern gas stove.

Having said that, the Trangia isn't for those wanting a super-fast cooking option, it's much better suited to those willing to take their time.

Once the spirit starts to vapourise the Trangia gets a good burn going, intensity can be controlled in a rudimentary way with the simmer ring, we found we could get the flame about right for most cooking duties with this.

The burner leaves light soot deposits on the bases of your pans but a good scrub with a scouring pad and you're good to go again.

Measuring the right amount of fuel gets more reliable the more you use the stove, and depending on what fuel you use and where you buy it its certainly no more expensive than standard gas cartridges and can often be quite a bit cheaper. A word of warning when filling the burner, stay below the 2/3 full mark or you risk experiencing eyebrow singing 'flares'.

The Trangia is available with a wide range of pan options to suit pretty much anyone's needs, it's also available as a stand-alone burner if you want to cobble together your own set-up. The pans provided with the 27-7 set are hard-anodized lightweight aluminium. The total weight of the set on test is 690g, which is great considering that you get two 1 litre pans and a frying pan, as well as the windshield in with the deal.

We found the windshield to be very effective at both blocking the burner from the wind and channelling the flame onto the pan. It does however add a fair bit of bulk to the set-up further reinforcing that this isn't one for the ultralight, ultra-packable crew.

The 27-7 has an RRP of £90 but is widely available for around £65 which is excellent value considering that it's a full camp cooking solution for up to 2 people.