A glorious walk taking in fascinating ancient monuments, including one of the best stone circles on Dartmoor. We cross the lovely North Teign River, with two swimming opportunities.

The walk starts at Batworthy, where large numbers of flint tools have been found, which are thought to date back to the Mesolithic period, 12,000 to 6,500 years ago. As will soon become apparent on the walk, this area of Dartmoor has been occupied by man for many thousands of years.

The first stop is at Kestor Rock, which has an unusual natural basin at the top, full of water. The Victorians were fascinated by the basin, believing it was the focus of ancient Druidical ceremonies, with some quite gruesome ideas about it being used to collect blood from human sacrifices. It's about three feet deep and is thought to be the biggest on Dartmoor. At one point a fence was put around it to stop sheep falling in; the holes for the posts are still there. There are wonderful views from the top of the tor; to the south east you can see Middle Tor and Frenchbeer Rock. Over to the south west you can see the Long Stone the next stop on the walk.

From Kestor, you head south west along the track towards the Long Stone, which is part of the amazing complex of stone rows and standing stones of Shovel Down, classified as a PAL - or Premier Archaeological Landscape - by Dartmoor National Park. The experts there say: "Shovel Down is the location of a complex of prehistoric ritual monuments, constructed about 4,000 years ago. The presence of five stone rows, a possible stone circle, standing stones and associated burial mounds (cairns) makes this one of the most complex and significant ritual landscapes on Dartmoor."

It is also home to prehistoric field systems, from a slightly later period, about 3,500 years ago. During this time Bronze Age man started dividing up land into fields, and the boundaries are known as reaves. Look out for low, stony, vegetation-covered banks; these are the reaves, and they can be seen mainly in a north east/south west direction. You can also see the remains of the early farmers' round houses, in the form of stone hut circles.

The most prominent of the monuments is the Long Stone. In later times it was adopted as a boundary stone for the three parishes of Chagford, Gidleigh and Lydford (it has the letters C (Chagford), GP (Gidleigh Parish) and DC (Duchy of Cornwall) carved onto it). Think of the outrage there would be today if someone decided to 'graffiti' an ancient monument! There are several double stone rows, which Samuel Rowe, in his 1848 Perambulation of Dartmoor, describes memorably as "parallelithons". He believes the stone rows were what he calls 'processional roads' of Druidical worship, leading to the Scorhill Stone Circle; there is no real consensus though on what these monuments were for. Other theories are that they were used for worship, or for studying the sun and the moon. Whatever the truth, these historic remains are fascinating.

After exploring the stone relics, it's time to head back northwards and cross the North Teign by the picturesque Teign-e-ver clapper bridge. Although it feels very ancient, and indeed many clapper bridges do go back to medieval times, English Heritage lists it as being probably of 19th century construction. The first swimming spot is a short way downstream from the clapper bridge, by another, much more rudimentary clapper, described by Eric Hemery in High Dartmoor (1983) as "badly sited and crudely built", although he describes the area here, between the North Teign and the Wallabrook, as a "wild and beautiful place".

There is a remarkably rectangular channel just below the rudimentary clapper; this is because it is partially man-made, by tinners who walled up the sides to accelerate the current. It's a great little swimming spot; while not the place to do your lengths, it is a fun place to wallow and to play in the waterfalls below. The setting is totally idyllic.

The water then tumbles over a series of cascades, which include the extraordinary Tolmen Stone, a huge boulder with a natural hole in it. Many legends surround this stone, including that if you stand in it you will be cured of whooping cough and rheumatism. There are also claims that the Druids used it for purification and fertility ceremonies.

A little further down is the next pool - broader and rounder than the first, and bordered by rowans. After a refreshing dip, you can walk north for about five minutes to find the Scorhill stone circle, described by Samuel Rowe as "by far the finest example of the rude but venerable shrines of Druidical worship in Devonshire". It is also one of the best preserved, and least interfered with. Aubrey Burl in his Guide to the Stone Circles of Britain, Ireland and Brittany has a few reservations but is still impressed: "...even with two horrible cart-tracks lurching through it, the ruin retains a bleak grandeur."

As you walk uphill away from the circle, make sure you look back at the view of it, as it is arguably better than when you're up close. The vast, almost barren-looking moor sweeps up behind the circle; if the sun is setting behind the stones the picture is complete. When you reach the crest of the hill, there are more spectacular views, and looking to the right you can see Kestor Rock, where we started.

The walk then takes you off the moor and down a picturesque Devon lane with some beautiful granite cottages. You pass through private woodland, mostly of farmed fir trees, before hearing the enticing sound of the river again, which you cross via a wooden clam bridge. It's a steep climb up the other side before you rejoin the road which takes you back to the starting point.

If you've got the energy after your ascent, it's worth looking at the Bronze Age Round Pound which is just on the right of the road before the parking place. You can clearly see the circle of stones enclosing what would have been the settlement inside. There is evidence it was used by Iron Age people too. In the 1950s it was excavated and an anvil was found, along with a pair of pits that were used for iron smelting. Later on, in medieval times, it was used again, as some kind of shelter.

1. From the car park, you can see Kestor Rock on the hill to the south; take the path directly to it.
0.3 miles

3. At the Long Stone, take the path to the right, to the north; you feel as though you're heading back towards the car park.
0.3 miles

4. You reach two double stone rows - follow the path by the left hand stone row. Walk along the path with the wood and stone wall some distance to your right.
0.7 miles

5. You reach the Teign-e-ver clapper bridge. Turn right and walk along with the river on your right. After a few minutes you reach the first swim spot, by a second, very crude, clapper bridge. You are on a little peninsula; to reach the Tolmen Stone and next swim spot, walk on to the end of the peninsula and cross back over, walk a short way downstream and you will find the Tolmen Stone, and just downstream from that, the second swim spot.
0.1 miles

6. Retrace your steps and cross a second clapper bridge over the Wallabrook, and follow the path north east to Scorhill Circle.
0.2 miles

7. After looking at the circle, take the track north east which takes you off the moor via a wooden gate.
0.5 miles

8. Walk down the lane and turn right at the T junction, following the sign for Berrydown and Gidleigh. There is a wooden fingerpost saying Mariners Way, Teigncombe and Road to Kestor Rock.
0.8 miles

9. You will reach a gate on the right which says Gidleigh Wood. Take the track through the gate and into the woods. The path splits; take the right hand fork.
0.4 miles

11. Go through a gate/stile, then turn right into the lane at the top. Follow the lane back to the car park.
0.4 miles 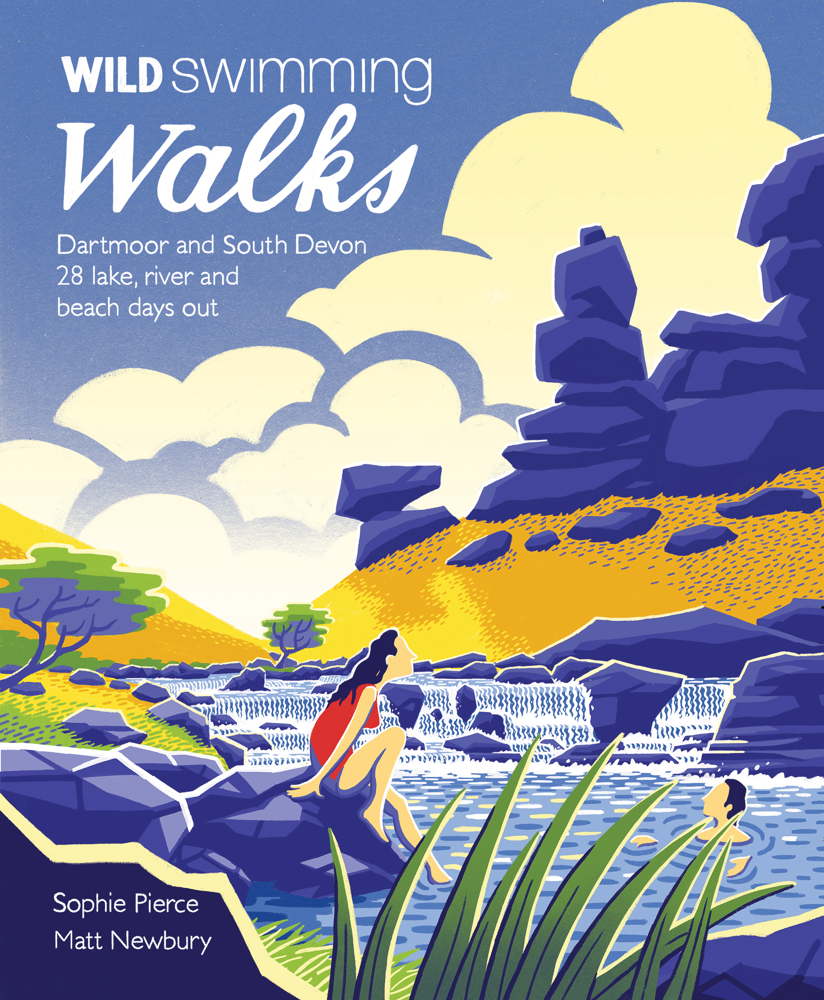 Route reproduced with kind permission from Wild Swimming Walks, book available now for only £14.99 from wildthingspublishing.com