The waterfall walk in the Brecon Beacons, otherwise known as the four falls walk, is one of the most picturesque the National Park has to offer. This walking guide gives you the basics to get you started.

Based around a series of four waterfalls, this walk can be found within the Fforest Fawr, in the middle of the Brecon Beacons National Park. The walk winds its way along the path of four small rivers; the Mellte, Hepste, Pyrddin and the Neath Fechan. All four cascade downward in a series of beautiful waterfalls that can easily be seen from the trail, although to get closer to some of them, you have to descend a series of steep steps, before re-joining the main path.

The real highlight of the walk - one kids will remember for years - is the opportunity to walk behind the tumbling waters of the Sgwd yr Eira waterfall. Unless it’s high summer and the flow is down it’s almost impossible to do this without getting wet, and it can be a slippery business underfoot. But for those brave enough, you are rewarded by the sensation of actually standing right behind the thundering water.

Waterfalls Walk - What to Expect 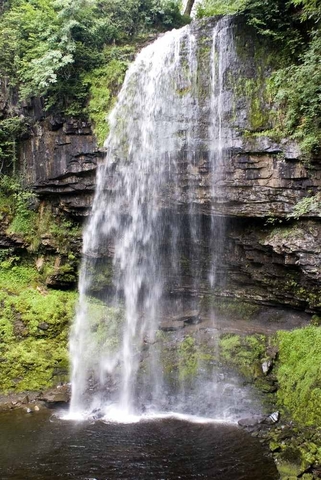 An undulating hike of about 15km with some steep sections, it's not technically challenging, and should take you around two and a half hours at a moderate pace. If the weather's not with you, however, some parts are prone to becoming pretty muddy - it's worth wearing a decent pair of waterproof walking boots, with grip enough to handle wet, slippery tree roots, as well as either gaiters or walking trousers.

There are two main starting points for the four waterfalls walk, the Four Falls car park Gwaun Hepste, or the Angel Inn in Pontneathvaughan. We recommend the former, because if you start from Gwaun Hepste, you'll get to the Angel Inn about halfway around the 15km route, making a great place to stop for a drink stop or a spot of lunch.

However, if you want make the hike shorter start at the Angel Inn. From here you can easily pop up to the first fall before retracing your steps, and you'll the path on this section is relatively flat and in good condition (although can have big puddles if wet).

Before you set off from Gwan Hepste, it's worth having a look at the cave, which is down a signposted trail. Then set off on the trail, which follows a river that you won't see at first - it's hidden in the trees to your right - but you might hear.

The footpath follows the river closely for just under a kilometre before you get to a bridge over the river Mellte. You can cross over to get a closer look at Sgwd Clun-gwyn from the other side, or continue on along but the main route, which goes past the bridge, across two streams and up a hill to reach the primary viewing point for the waterfall.

Once you've had a good look, continue in the same direction through the woods. You'll see a path with a sign off to your right that will take you to Sgwd yr Pannwr - which looks like a miniature Niagara Falls.

From here, jump back on the path and head against the direction of the flow to Sgwd Isaf Clun-gwyn. This section involves some scrambling over rocks, and you may find the path disappears, but it's always obvious which direction you're heading in. When you see a cascade of three rapids, you know you're near, and before long you'll find yourself looking at the waterfall proper. You'll have to turn round at the top, and rejoin the main path where you turned off to see Sgwd yr Pannwr.

The final fall, and the one you can stand behind, is Sgwd yr Eira. As you head towards it, have a look at the gorge to your right. The path veers left, passing a viewpoint from where you get a good look at the cascading water. You'll then come across a fork in the path, with the main route going on ahead, back towards Gwaun Hepste, and a trail to your right heading steeply down to base of the falls, from where you can walk through water. Again, it's worth the detour, especially with kids. Plus if they're dressed to walk behind the waterfall, it won't even matter if it's raining!