6 of the best cycling road routes in Catalonia

Catalonia is a paradise for road cycling – that’s why many pro riders come here to train for their big events.

Pedal, explore, taste, remember... Catalonia offers an extensive and varied network of backroads that are ideal for road cycling. Many of these roads host important stages of the Tour de France and the Volta Ciclista a Catalunya. Discover varied, natural and unique locations, visit historic small towns and, of course, sample the local cuisine.

In Girona, experience the iconic beauty of the Costa Brava along the charming routes that start and end in coastal towns such as Castell- Platja d’Aro, Sant Feliu de Guíxols, Lloret de Mar or Blanes. In Costa Barcelona, with Calella or Santa Susana as your starting point, you can ride to the dense temperate forests of Montseny, the Montnegre Park or Montserrat.

In the south, the Costa Daurada is the gateway to the country roads of Montsant, the Prades mountains and Els Ports Natural Park, Cambrils, Mont-roig del Camp and Sant Carles de la Ràpita. In the Pyrenees, the Val d’Aran represents the quintessence of mountain cycling, with truly epic routes throughout the mountains.

Many professional road cyclists from all around the world choose Catalonia, particularly the areas around Girona and Cambrils, for preparatory stages and training for international competitions. For the rest of us, it’s a chance to test our riding skills while watching this fascinating region unfold in front of our eyes. And all the routes can be adapted to the time available – from several hours to several days – and your own fitness. 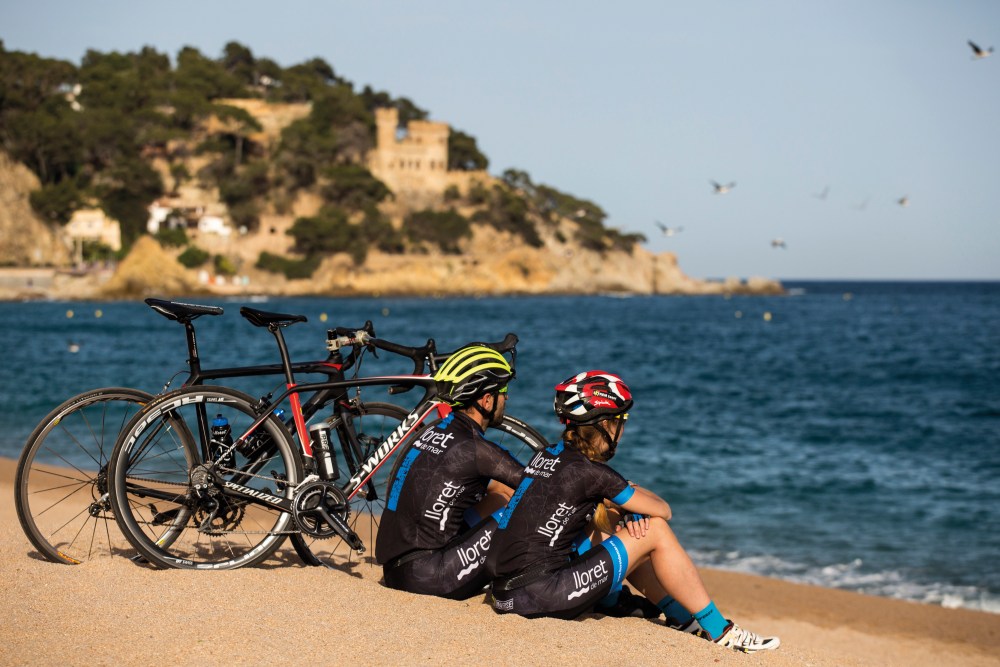 Going via Llagostera and Palamós, this is one of the most beautiful coastal rides in Catalonia. It has a kick early on with a steep climb after 20km, but thereafter allows you to make the most of long, sometimes winding stretches and stunning coastal views. The destination town of Sant Feliu de Guíxols is one of the region’s most important centres for active tourism.

Don’t miss: Sant Feliu has Europe’s only via ferrata at the water’s edge – rising 500m from the waves.

A classical mountain ride close to Barcelona. In a fantastic loop you can enjoy the panoramic views, the sounds and the smell of the woods and the mountains as you climb Santa Fe del Montseny and Coll Formic. There are plenty of ups and downs, including a testy climb of 1,000m over about 25km. The last 50km, though, are pretty much all downhill.

Don’t miss: In the autumn, the colours of the foliage give a magical touch to the landscape. 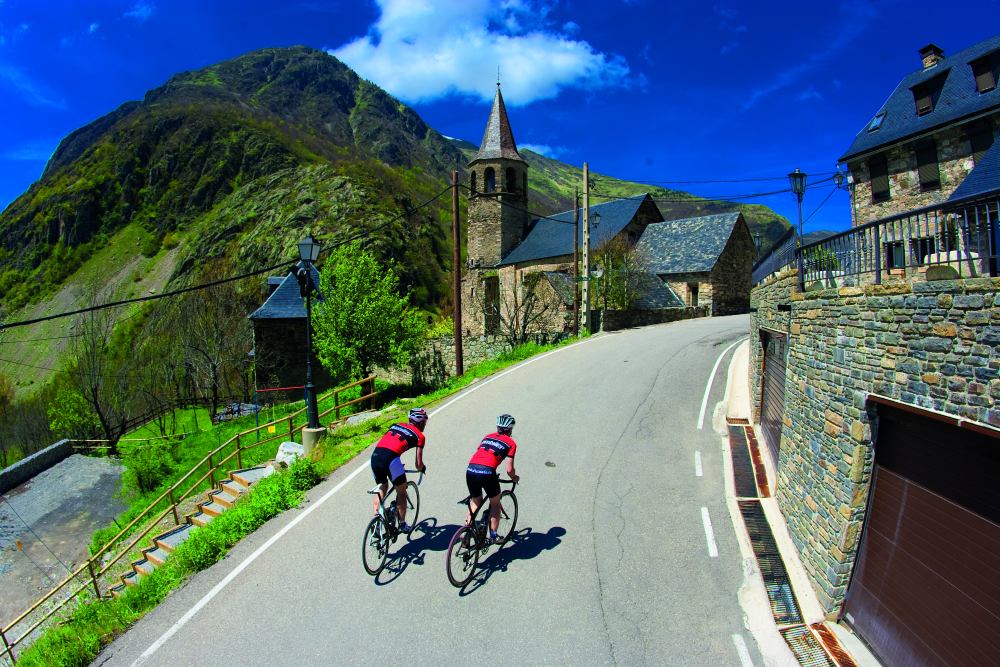 An attractive but testing circular route through the countryside of the Priorat wine-growing region – a land of steep vineyards, harsh cliffs and imposing rock-faces, hidden valleys and cool ravines. Includes one long 20km ascent from about 30km, followed by a sharp descent through 200m, and then 200m back up the other side – all within the space of 10km.

Don’t miss: Of course, sample the Priorat wines – but maybe wait till the end of the route!

This route forms a loop near Vielha, along quiet roads and up some major climbs. There are some stunning views, especially over the Varicauba forest and the Maladeta and El Aneto massif. The route also passes through some of the area’s oldest and least populated villages. With their rustic slate-roofed houses, fountains and stone washing areas, these settlements are full of charisma. The vegetation is diverse, with hazel and cherry trees and forests of spruce, beech and oak. And although it can be done in both directions, we suggest doing it anti-clockwise. 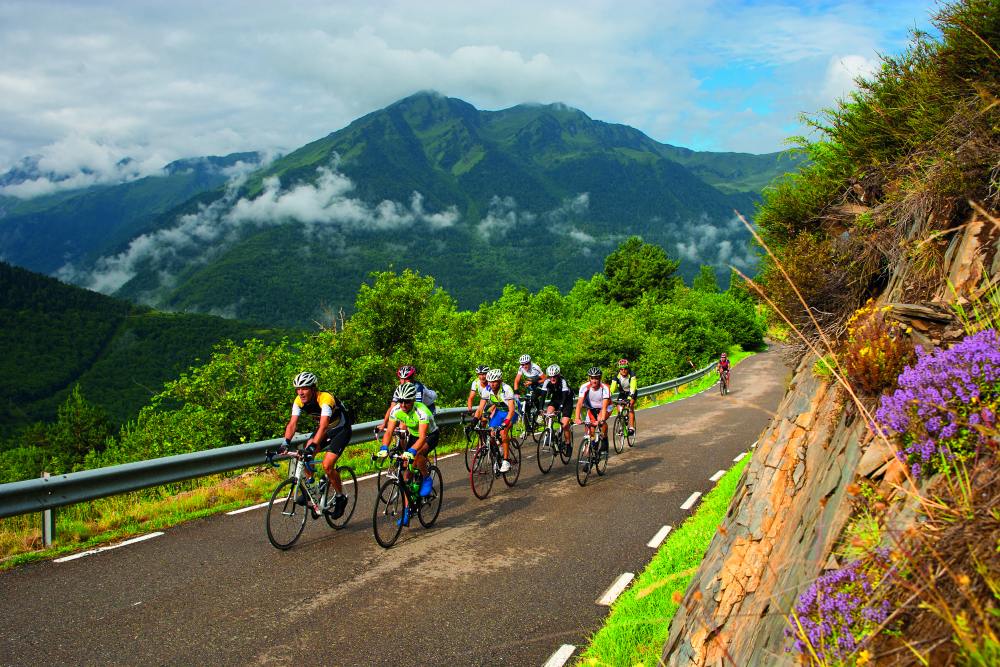 A once-in-a-lifetime, very challenging 197km route starting in Val d’Aran and running through Occitania (France) that enables cyclists to discover the beauty and magic of the Pyrenean mountain passes. Practically all the route runs along back roads, allowing you to enjoy all the charm of the landscape in this territory as you ascend some of the most important passes of this ancient region. Leaving from Vielha, you can tackle it in one or two days, depending on your level of fi tness – though even a professional cyclist will take more than six hours to complete it!

Don’t miss: this is one route where you really can get the t-shirt. Souvenir t-shirts are much coveted.

Taking in the Sanctuaries of El Mont and Rocacorba, this is a purist’s route designed to train sustained climbs, with ascents up to two of the most iconic landmarks in Girona. Starting from Banyoles, the first climb up to the Mont Sanctuary carries an elevation of almost 1,000m in 19km. The ascent becomes even harder after the Serra Col! You go back through Banyoles a second climb: the Sanctuary of La Mare de Déu de Rocacorba. This time, an 880m elevation and 13.8km separate you from the peak. And you climb 540m in 6km in the second part of the climb.

Don’t miss: Enjoy a well-deserved drink on the shores of Lake Banyoles at the route’s end.

For more info, go to catalunya.com

Catalonia: A home for cyclists

Take it easy with these 5 family cycle rides in Catalonia