The Azores is a stunning archipelago offering everything from volcanic hiking landscapes to top dive locations and a rich culture. Here's what to expect from these fantastic islands...

These are difficult and trying times for travellers. Making sense of where you can and can't go is only half the battle; finding somewhere that is also the perfect holiday destination is the icing on the cake.

This is where this Atlantic archipelago comes in - a year-round destination for nature tourism that offers the safe distance that visitors need, many outdoor activities that are just what you want after being confined for so long, and the peace we crave in such troubled times.

All the nine islands of the Azores Archipelago are volcanic in origin and sit in the North Atlantic ocean, stretching for 600 km, 1,600 km from mainland Europe.

The islands are divided into three geographical groups: the Eastern Group, comprising Santa Maria and São Miguel, the Central Group, including Terceira, Graciosa, São Jorge, Pico and Faial, and the Western Group, composed of Corvo and Flores. The Azores, along with the archipelagos of Madeira, Canary Islands and Cape Verde, constitute the biogeographic region of Macaronesia, a name which means "fortunate islands" - as visitors will quickly discover.

The first archipelago in the world to be certified as a sustainable touristic destination, these nine different islands draw on five centuries of history and tradition to offer warm hospitality, a very special gastronomy and unique natural scenery. As well as its thriving art, culture and architecture, the Azores is a great destination for land, sea and air adventures, also for lovers of nature tourism, birdwatching and golf, and, indeed, for anyone who takes delight in long hikes surrounded by dazzling landscapes.

Here's a quick rundown of the nine: At 62km long and nearly 16km wide, São Miguel is the largest island, and also the most populated, being home to half of the Azores’ inhabitants. Nicknamed the Green Island, its landscape is made up of extensive fields and dense woods with native species such as the Azores heather, faya, laurel and holly providing habitat for a very special bird, the Azores Bullfinch.

São Miguel is also a land of lakes nestled in huge volcanic craters. The largest and most iconic lies in Sete Cidades - a place filled with legends and myths, that is best viewed from the Vista do Rei lookout. Almost as spectacular is Fogo Lake, a Natural Reserve since 1974.

A centre for a huge array of sporting activities, the best way to explore this beautiful island is by hiking, canoeing, horse riding, mountain-biking and cycling. You can also rise above it all and go paragliding, or delve beneath the surface in the Gruta do Carvão (Carvão Cave). You can also play golf, on the island's two courses, or go climbing on its cliffs, scuba-dive into its waters or go whale-watching or big-game fishing. On the north coast, there are many spots tailor-made for surfing.

The cuisine of São Miguel is filled with fresh fish dishes and visitors should also try the famous steamed or boiled dishes of meat and vegetables cooked in large pots buried in the geothermal soil for up to five hours! 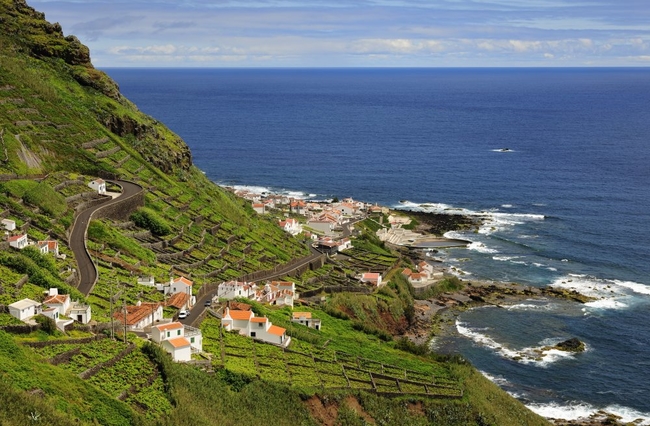 Known as the Yellow Island or the Island of the Sun, Santa Maria has a warmer, drier climate with less rainfall. It's split into two contrasting areas - a lower, flatter area, where the airport and the town of Vila do Porto are located, and a hilly area, featuring more luxuriant vegetation and the Pico Alto, which offers a good panoramic view.

The first island discovered and the first to be settled, Santa Maria was also the first island to be formed, emerging about 10 million years ago from the seabed. Natural highlights include the barreiros (clay terrains) of Santa Maria, the waterfall of Ribeira do Maloás, with its lava columns reminiscent of the Giant's Causeway, or the Cascata do Aveiro, an impressive 110m high cascade. On the coast, the Formosa Beach has earned the title of the clearest beach of the Azores.

Santa Maria is the best island for swimming in the entire Azores archipelago, with Praia Formosa a favourite spot for surfing, windsurfing and sailing, too.

The shoreline is ideal for fishing, diving and spear fishing. Paragliding is also popular as there are good shelters in the several bays of Santa Maria. You can also explore natural caves, such as the Furna de Santana and the Furna Velha, and man-made caves, as the Gruta do Figueiral. 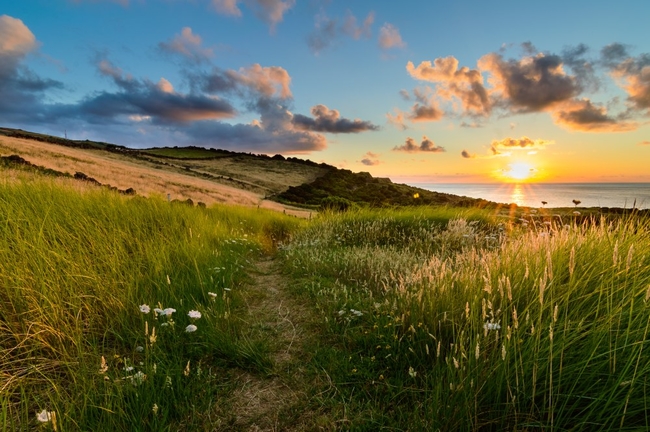 The second most inhabited island of the Azores, Terceira is a popular centre for all kinds of watersports, as well as paragliding, climbing and caving, hiking, biking and horse-riding.

Known as the Purple Island, at its centre lies the Guilherme Moniz Caldera, home of the biggest area of native heathers in the Azores. Reminders of the island's volcanic origins are everywhere, from the mountains and hills to the spectacular Algar do Carvão, a huge 90m high volcanic chimney. From its arched roof hang remarkable silica stalactites, the biggest in the world. The Gruta do Natal, a cave consisting of a lava tube, is another wonder because of its naturally long, straight passages. The walls, ground and ceiling have different colours and shapes, transforming the cave into a mystic place.

The historical centre of Angra do Heroísmo is a network of beautifully preserved streets, alleys, churches, palaces, manor houses, monuments, squares and gardens, recognised as a UNESCO World Heritage Site. 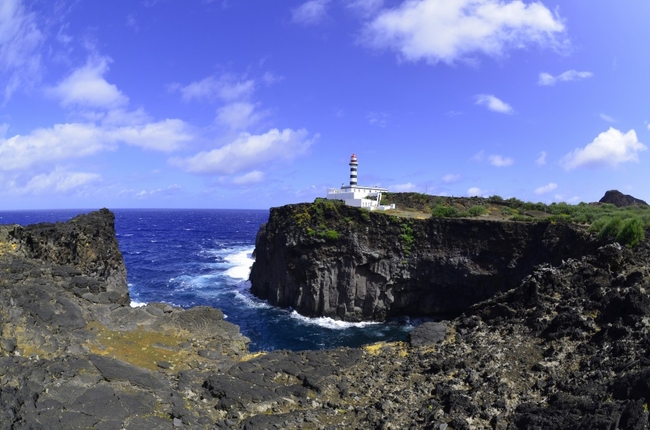 Graciosa, the second smallest at just 12.5km long and 7 km at its maximum width, has the nickname White Island, due to its whitish volcanic rock. Classified by UNESCO as a Biosphere Reserve, it’s an exceptional location for diving, fishing, kayaking, sailing and windsurfing, while it is also home to some of the Azores' most unforgettable caves. Plus, the Ilhéu da Baleia (Whale Islet) has been turned into a remarkable whale sanctuary.

In the recently refurbished natural pools of Carapacho spa, visitors can enjoy a swim in the sea water heated by thermal water, enjoying a relaxed and exotic natural thalassotherapy. 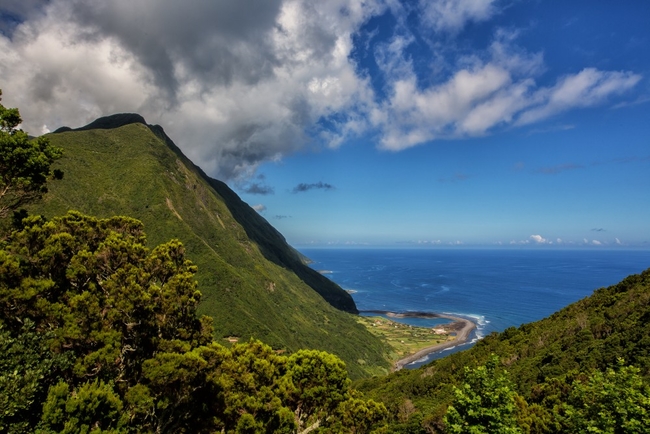 Long (54km) and thin (just 6.9 km max in width) São Jorge is the Brown Island, characterised by its earthy natural tones. Its elongated shape punctuated by a sequence of cones give it the appearance of a sleeping prehistoric animal. The most iconic elements of the island’s landscape are the more than 70 fajãs, flattened surfaces formed near the sea and framed by imposing cliffs.

As all over the archipelago, São Jorge Island provides excellent conditions for maritime activities, such as diving, fishing, sailing and kayaking. The waves of Fajã da Caldeira de Santo Cristo are considered a European Mecca for surfing and body-boarding.

The island’s geography is great for hiking and mountain biking. Climbing, based at Urzelina, and canyoning are increasingly popular here, too, while the Montoso and Bocas do Fogo Caves, at a depth of 140m and 120m respectively, are a challenge for amateurs and experts alike. 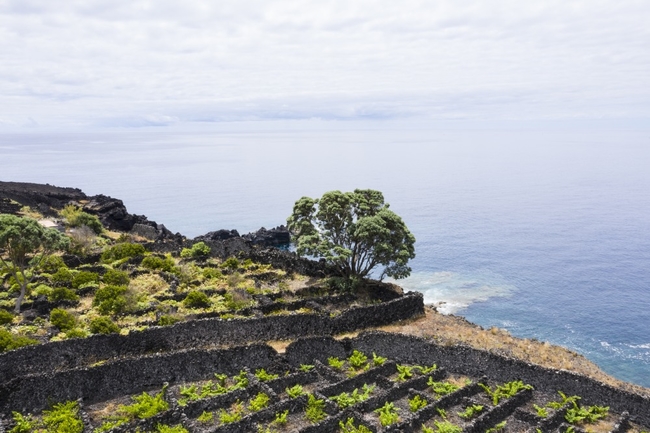 The extensive lava fields that dot the landscape, and that locals calls lajidos or terras de biscoito (cookie land) have given rise to the nickname Grey Island, and the Landscape of the Pico Island Vineyard Culture has been classified by UNESCO as a World Heritage Site since 2004.

To the east of Mt Pico, the island stretches in a long volcanic ridge, with lush patches of flora and pastures, where there are about 200 small basaltic scoria cones and about 20 lakes. These - and the countless flooded bogs and ponds - serve as habitat for the residents and migratory birds, like the grey heron.

Whale-watching is a popular pastime here, along with watersports, caving, hiking, biking and horse-riding. 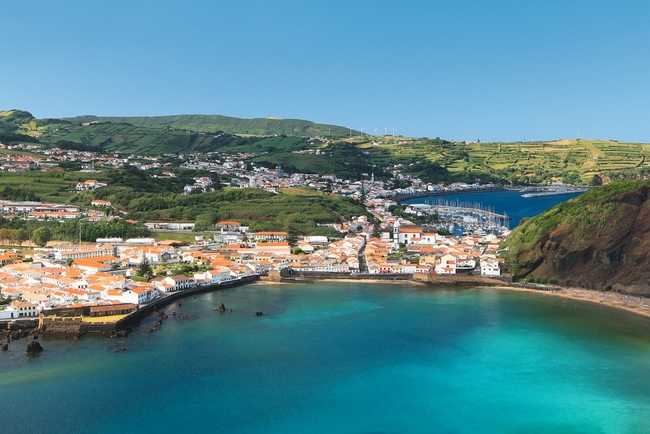 Faial is the third most populous island and a profusion of hydrangeas has earned it the title Blue Island. The island's symbol, its Caldeira volcano, dazzles with many flowers, plants and trees. The 7 km-long walls of the caldera are covered by various plants, including beech trees, junipers, moss, cedars, ferns and, of course, hydrangeas.

The beaches of Conceição and Porto Pim are perfect for swimming, and so is that of Almoxarife, a long extension of dark sand facing the Pico mountain. At Varadouro, the bay includes a tidal pool among rocky tips of black lava.

The link between Faial and the sea remains strong. Horta is an important centre for whale watching, swimming with dolphins, diving and boat rides, and the island is a popular spot for other watersports, too. Sport fishing is an old tradition and record-breaking captures of sharks and marlins have been made here.

On land, dozens of kilometres of trails cover the island’s hilly interior and coast, offering marvellous walks or bike rides. You can boost your adrenaline levels with mountain biking, 4x4 SUV or kart-cross circuits. 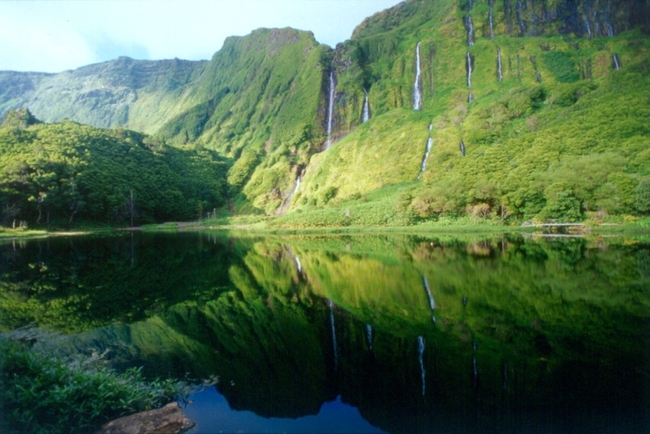 The Pink Island, Flores is dominated by an undulating central massif which rises out of a landscape. dotted with craters, lakes, waterfalls and streams and covered in lush native laurissilva forest.

A boat trip is the best way to appreciate the magnificence and diversity of the Flores coastline, with many highlights only accessible from the sea. It is also easy to cross from here to the small neighbouring island of Corvo. The natural tidal pools of Santa Cruz and the beaches near Lajes das Flores are good for swimming, along with the pebbled beach of Fajã Grande. Swimming is also possible in the ponds formed by the waterfalls at Poço do Bacalhau and Ribeira Grande.

Good conditions are found here for diving and whale-watching, and the island is one of the best spots in the Azores for watching birds such as the goldcrest and the blackcap, and is a true sanctuary for native and migratory species, especially from the American continent.

As there are many streams and waterfalls on the island, canyoning is growing in popularity, with at least a dozen sites, and courses are also available for beginners. 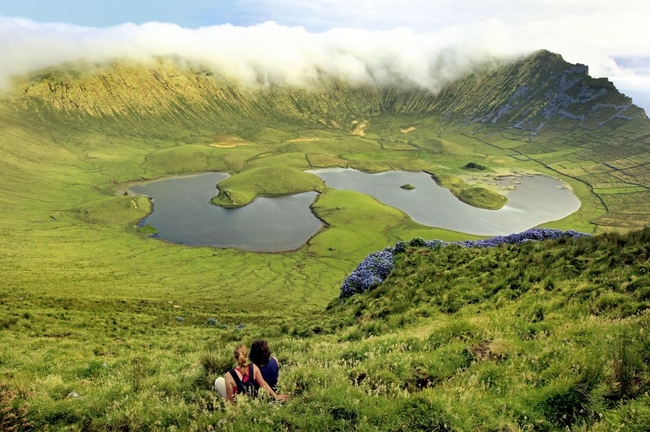 An established biosphere Reserve, the Black Island is dominated by green semi-natural pastures and dark stone walls that divide properties. The barns, built with basaltic rock, are used to store the tools used in farming, and they add to the black stain that prompted the island's nickname.

Corvo is a complete volcano island, with a caldera at the top and about 20 secondary volcanic cones on its flanks and inside the caldera, the only one in the archipelago with these combined features.

The entire island is surrounded by high, steep cliffs, and a boat trip around Corvo is an unforgettable experience, revealing its most inaccessible areas and allowing you to see beautiful landscapes and a large number of seabirds, dolphins and whales. As well as being a centre for birdwatching, you can swim off the beach of Praia da Areia and at Porto da Casa, and the island offers good walking and bike trails.

For more information on the nine islands, go to visitazores.com

For information on Covid-19 safety and on getting to the Azores, go to visitazores.com/en/timetoazores