Hiking in the Azores offers an intimate way to explore the remarkable landscapes of this Atlantic archipelago. These are six of the best hiking trails.

From the long-distance grand routes to short, easy walks, the Azores are brimming with hiking trails that enable visitors to explore the dramatic coastlines and interiors of these volcanic islands on foot. From huge cliffs to vast crater lakes, from cascading waterfalls to basalt shores, from epic calderas to humid forests teeming with lush, verdant plantlife, the nine islands of the Azores offer unforgettable, diverse landscapes.

Ancient, rugged paths that once bore traders and farmers have been restored to create the official Walking Trails in the Azores, a web of trails that criss-cross the islands, guaranteeing safety and reassurance to walkers.

Each of these footpaths goes through exceptionally beautiful areas, linking almost all corners of the islands, both along the coastlines and in the uplands. 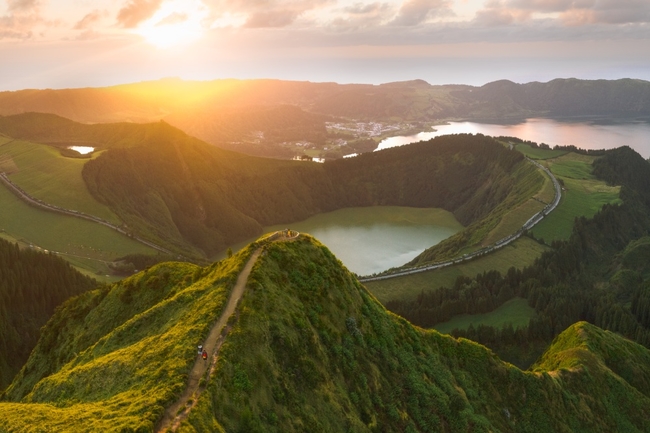 The Great Route of Santa Maria

Any walking trip to the Azores has to include at least one of the archipelago's Great Routes - a series of six long-distance treks across five of the nine islands. The Great Route of Santa Maria is the longest of the six, a circular route taking in the whole of the Yellow Island over 78 km of outstanding landscapes and dramatic scenery.

This walking trail crosses protected areas and natural reserves, and you'll also encounter several species of migrant birds which use the Azores as a resting place. Santa Maria is the best island for swimming, so don't miss the chances to take a dip in the many natural bathing areas. Along the trail there are also small signposted detours which lead to viewpoints with outstanding island vistas.

The trail is divided into four stages, of roughly 20km each, and there are stations and designated places to spend the night as wild camping is not permitted.

Highlights: The Aveiro and Cai’Água waterfalls, the 587m island high point of Pico Alto and the Barreiro da Faneca geosite, the location of the Azores' last volcanic eruption where the soil is a vivid red.

The perfect gentle introduction to the largest of the Azores islands, São Miguel, nicknamed the Green Island. São Miguel is also renowned for its beautiful lakes nestled in huge volcanic craters. The largest and most iconic lies in Sete Cidades - a place filled with legends and myths, that is best viewed from the Vista do Rei lookout.

This trail starts at Vista do Rei, goes through the southwest slope of the Sete Cidades ridges and ends inside the village. Throughout the walk you get unparalleled close-ups of the interior of the crater with its different lakes and volcanic formations.

A small detour takes in the viewpoint of Lomba do Vasco with a view over the west coast, including the village of Mosteiros and its small islets.

Highlights: The visit to the crater offers a marvellous insight into the forces that formed these beautiful islands.

Pico is the second largest island of the Azores, and is dominated by the volcano of Mount Pico. The highest point of the island, at 2,350m, it is also the highest point of Portugal, and though the volcano dominates your eyeline as you walk, this trail actually stands out for its scenic and cultural diversity. It winds through an area of Protected Landscape for the Vine Culture, one of the most emblematic of the island, including a great active vineyard area.

Classified as World Heritage by UNESCO in 2004, this trail is rich in elements associated to the vine culture such as ‘rola-pipas’ (carved slopes to enable the sliding of the wine barrels to the boats), ‘relheiras’ (tracks left by the wheels of the ox carts), shelter houses, wine cellars, tide wells and many more.

Highlights: The expansive view over the vineyards but also the islets of Madalena.

Two full days of walking on this, the second of two Great Routes on São Jorge - the Brown Island - but the reward is some of the most spectacular scenery the Azores has to offer. The most iconic element of the island’s landscape are the more than 70 fajãs, flattened surfaces formed near the sea and framed by imposing cliffs, and this trail makes the most of these features.

The trail is divided into two stages, of about 22 km and 30 km, and there are handy stations and designed places to spend the night (Local Lodging and Rural Tourism facilities).

Highlight: The panoramic views from Pico da Esperança at 1053m, the highest point of the island.

Along with Sete Cidades, Fogo Lake - a nature reserve since 1974 - is the most spectacular crater lake on the island. This out and back route starts as a linear climb up to the lake before making the return descent. During the climb you will pass a wood of Japanese Cedar, followed by a potentially muddy stretch along a traditional irrigation channel called a Levada, a lush route rich in endemic plants such as Azorean Blueberry, Azorean Heather and Laurustinus.

The return leg takes in some magnificent views over the South Coast of the island with the wonderful Islet of Vila Franca.

Highlight: The tranquility of the lake as well as the chance to appreciate the vital contribution of the man-made levada to carrying fresh water around the island.

The Great Route of Graciosa

Although split into two equal stages, The Great Route of Graciosa is not as challenging as some of the other long-distance trails in the Azores. It covers much of the island through a circular route that alternates between coastal landscapes, especially several islets, and the inland volcanic landscapes.

The first stage, connecting the area of Barra and the village of Luz, takes in the island’s east and south coasts, which are lower around Praia but higher and steeper at the cape Ponta da Restinga. During this stretch, you will also be able to explore the most iconic volcanic landscape of the island – the Caldera, where you can visit the Furna do Enxofre, a major volcanic cave that is about 40m high and 194m long and includes its very own lake!

The highlight of the second section is the Caldeirinha de Pêro Botelho, a 25m deep volcanic grotto located in the hills of Serra Branca, which is a true viewpoint over much of the island, including the valley between the central highlands and the Caldera highlands.

Highlight: The Caldera on stage one and the grotto on stage two.

Full details of these and the dozens of other Azores Walks can be found at trails.visitazores.com/en