Neil Pedoe sets out on a family holiday to Croatia, island hopping this laid-back country by bike and kayak.

Squinting through driving rain, I eye the long barbed wire fence above the road we’re riding along. It fizzes and crackles, the air full of electricity. Suddenly, a blinding and deafening bolt of lightning connects the earth to the sky with shocking violence. Somewhere to our left, the land drops steeply towards the Adriatic Sea, 300 metres below.

Five minutes and several spectacular lightning strikes later, we edge around the shoulder of the island of Vis’ highest mountain, the 587 metre-high Mount Hum, a river running down the road between our wheels. Far below, our destination comes into view - the pretty (and normally sun-kissed) port of Komiza, whose Venetian café terraces and pebbly beaches played a starring role in the Mama Mia films. With shelter in sight, it’s a struggle to resist releasing the brakes and plummeting down the remaining miles to the shelter of the port, but with six children in our group of cyclists, we take it slow in order to herd everyone down safely.

Some 20 wet minutes later, we pass the fortified walls of the church of St Nicholas at the foot of the mountain and roll onto Komiza’s picturesque harbour. Cold and soaked, but beaming with relief, we pose for a photo near the towering wall of the 16th century fortress, looking more like the pirates it was built to protect against than a group of normal families out for a bike ride.

We’ve ridden the length of the Croatian island of Vis, across red-earthed valleys draped with vines, over rocky crests and on barren mountainsides, all in the space of a morning. Our next challenge is to find a restaurant that will put up with 12 drenched cyclists traipsing in and dripping all over the floor.

This is only our second day on Vis, the furthest inhabited island off the Dalmatian coast in the Adriatic Sea, and already we’ve discovered that this rugged little place of only 35 square miles packs a punch for family adventure that’s disproportionate to its diminutive size. 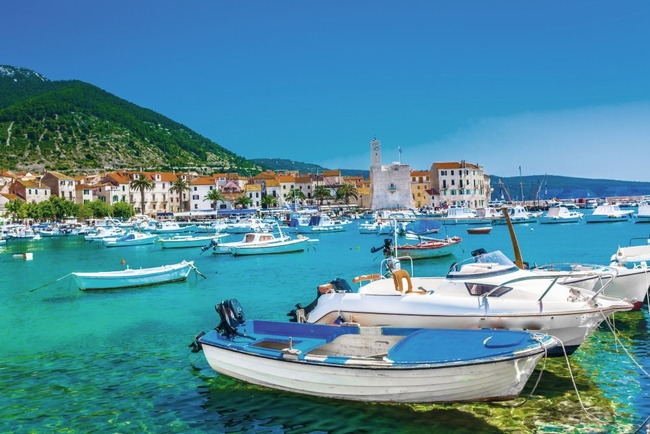 After a lunch of fresh, wood-fired pizzas and a Karlovačko beer, the kids and their bikes are loaded onto the Land Rover that our guide Xania has driven over to meet us while the rest of the adults saddle up to ride back over the mountain. Only now, the sun is blazing down on us - as you’d expect in August. With Komiza’s sparkling, yacht-dotted harbour far below and crickets serenading us from the roadside, it’s hard to believe that the morning’s stormy descent even happened.

Sparsely populated, Vis is a joy to explore by bike, with only minimal traffic sharing the quiet road network between the historic ancient ports of Vis town on the north coast, Komiza on the west and the plethora of little villages lining the island’s rocky coastline.

Heading off-road unlocks even more of this wild island’s Mediterranean scenery, from the scrubby summit of Hum and through lines of vineyards to bright, rocky beaches and quiet fishing villages. Decades of communist rule, during which the island hosted over a dozen military bases, have kept Vis almost entirely unspoilt.

The only downside to cycling on a small island with a mountain smack in the middle of it is that there is inevitably a lot of up and down in almost every ride.

As our base for the week is a whitewashed, green-shuttered villa by Rukavac, one of the idyllic fishing villages on the island’s south coast, that means every cycling morning starts with a hefty climb.

The villa is the home and guesthouse of our hosts, Xania and Craig Wear, who swapped expat careers as PE teachers in the Middle East for a very different lifestyle as hosts and guides for their own small active adventure company, WeareActive. 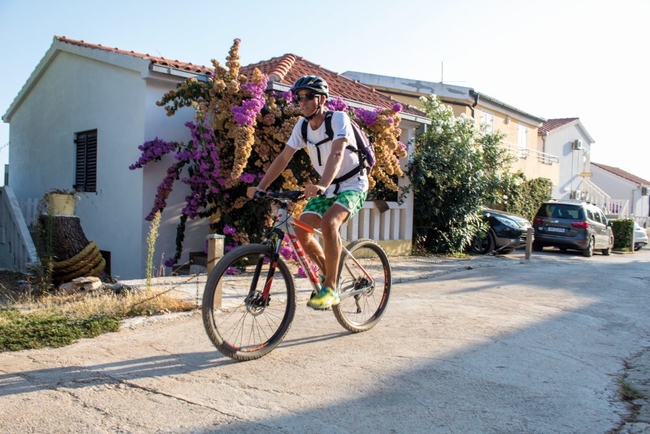 Following their ‘relaxingly active’ holiday mantra, every day starts with a short walk down to a limestone shelf at the water’s edge with their lop-eared dog Zora in tow, for a yoga session. This natural suntrap looks like it was chiselled out of the stony foreshore specifically for the purpose of stretching by the sea, followed by a bracing jump into the cool water.

A short walk back through the pines, a rinse under the outdoor shower, breakfast on the dazzlingly white terrace – and then the pedalling starts. We feel so alive and awake by nine o’clock that it hardly seems to matter that we always have to cycle uphill.

Apart from the storm, the rest of our week with Craig and Xania follows a similar pattern: half-day family rides out into the vineyard-draped valleys and pine-forested hills, or more challenging off-road mountain bike sorties with just myself and Craig onto the endless network of gravel roads and dusty singletrack that lace Vis’ secluded coves.

Stories of daily adventures are then shared with the other three families staying here over Xania’s wonderful vegetarian suppers on the villa’s whitewashed terrace.

Nowhere is particularly far from the sea on Vis, but our base in Rukavac is perfectly placed for every type of coastal adventure. Seeking rocks and boulders to clamber over and jump off, DIY coasteering style, we head down through the pines and past the yoga platform, looking for the gun placements and patrol boat tunnels carved out all around the island’s coast. 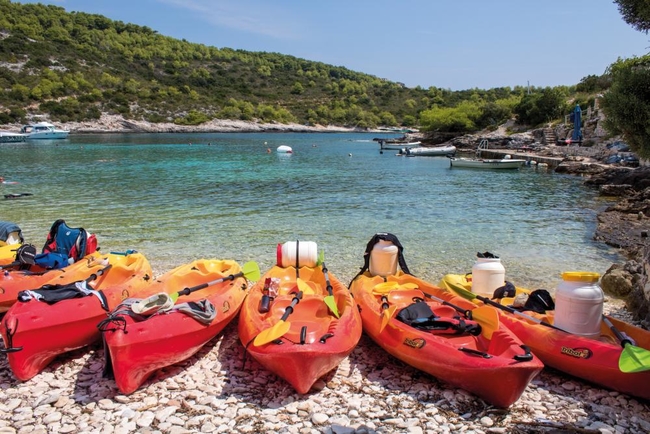 They’re reminders that Vis was once the heavily guarded outer edge of the communist former Yugoslavia. At the next cove along, we find the pebble beach of Srebrena, where we snorkel with shoals of fish, dodging sea urchins and looking for the octopus that Xania told us hunts among the rocks.

Just 100 metres below our base is the tiny little fishing harbour of Rukavac, where Craig and Xania’s sea kayaks and stand-up paddle boards are piled up above the water between two tumble-down stone outbuildings.

From the very first launch, as we slide out into the crystalline water between the seaweed-draped buoys and a handful of little fishing boats, we know this is going to be a magical place to paddle with the kids.

And we’re right. There are a handful of tiny islands strung out off the south-eastern corner of Vis, with the southernmost, Ravnik, lying an easy mile’s paddle away from Rukavac in the two double sit-on-top kayaks we take, both packed with picnics. The outlying islands create a kind of sheltered channel down which we see several incredible super-yachts cruise.

One evening, later in the week, Craig takes us all out to paddle round the southern tip of this island and into the Green Cave, where a shaft of evening light from a skylight in the roof plunges deep into its clear, dark waters.

Today, we’ve got the whole island to ourselves, pulling up the canoes on a rocky spit where we snorkel among sea urchins and seaweed.

Other kayaking trips during the week include a long but rewarding paddle all the way back from Komiza on the west coast and an early morning paddle to magical Stiniva Cove, whose hidden beach is only given away by the boats moored by its entrance. Only swimmers and kayakers like us are allowed into its interior and onto its stony beach.

Once in, tall, sheer cliffs shield its entrance from the open sea and rise up either side. A natural wonder, Stiniva is a spot worth savouring, and while I clamber up the back to take a photo, Craig leads the others off to climb the cliffs at the front of the cove. The grippy limestone above a safe drop into deep, clear water is the ideal classroom for budding climbers. 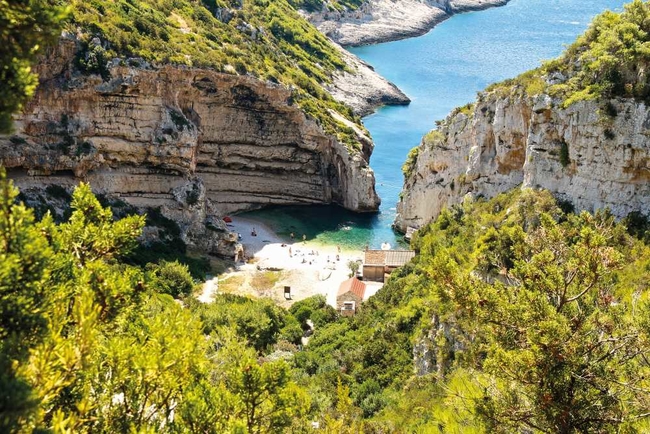 Over the last few days we split our time between pedalling and paddling, spending the long summer evenings at the beach or trying to conquer the art of balancing on the slackline strung up in the midst of peaceful pine woodland by the villa.

Our last evening on Vis is spent relaxing in the sheltered courtyard of Roki’s, a traditional winery restaurant. Set among its own vineyards, this is a Vis culinary institution. At Roki’s, the organic wine on the table is from the vines that surround us, and the octopus, lamb and beef dishes are slow-cooked for hours under traditional peka metal covers over hot charcoal. The laid-back pace here somehow perfectly matches our deep feeling of relaxation after a week exploring this beautiful, rugged Adriatic island.

Four places to refuel in Vis and Split

Traditional peka (a baked meat and veggie concoction) dishes are slow-cooked over hot charcoals and served with a warm welcome on the vineyard terrace, with wine produced from the surrounding vines to wash it all down.

Seafood specialities and local wine served on a terrace overlooking the pretty little fishing harbour of Rukavac and the outlying islands.

In a tight alley lined with restaurant tables at the bottom of the Marjan steps, the atmosphere, pizza and fish dishes of this cosy restaurant with tables overflowing into the street is hard to beat.

Enjoy a beer after a walk up Marjan Hill’s many steps from this perfectly placed traditional terrace bar, which looks down over the buzzing nightlifeof Split’s harbour. 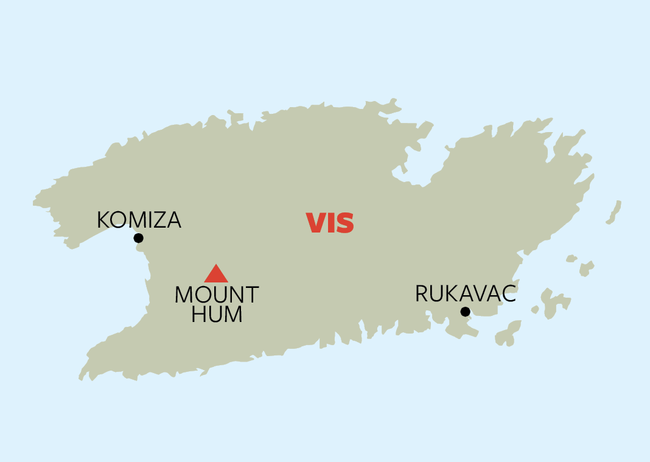 Temperatures reach into the 30s in the high summer, so head protection and sunscreen is vital, especially for smaller explorers.

Neil and his family stayed with WeareActive, who run week-long holidays on Vis from £977 per person (discounted prices are available for children) including accommodation, activities including cycling, sea kayaking and yoga and some meals.

EasyJet flies from Gatwick to Split from £66 return.

The ferry from Split to Vis with Jadrolina Ferries takes 2 hours 20 minutes and costs from £5.42 for adults and £2.70 for children each way. Taking bikes on the ferry costs £5.42 each way.

Delicious traditional dishes such as cmi rizot (black risotto) with cuttlefish or squid, or a fisherman’s stew called brodetto cost less than £10 in local island restaurants.

As well as the villa at WeareActive, Neil and family stayed aboard the MS Orao, an 18 berth wooden boat available to book via AirBnB for as little as £50 per night. The Orao is moored by the marina in Split. Facilities are basic and accommodation is in simple bunkbed cabins.