Walk Through a Gateway to Discovery in the Czech Republic

Looking for a new destination to discover on foot and by bike? Visit the Czech Republic and you'll find miles of hiking and biking trails, beautiful landscapes and a rich history.

UK hikers and bikers looking for somewhere new to explore will find the north-west region of the Czech Republic offers a vast expanse of undiscovered walking and cycling territory. Here’s an introduction to some of the best the region has to offer.

The Ore Mountains offer a variety of leisure options, and are interwoven with hundreds of kilometres of hiking and cycling and MTB trails.

The Ore Mountains’ name is derived from the word ‘crust’, which was associated with mining, ore processing and timber navigation. And mining routes abound including a Coal Safari, which offers a fascinating glimpse into the region’s mining history.

These mining landscapes include Jáchymov – with the ‘Red Tower of Death’ where political prisoners of the Soviet regime were sent to mine uranium ore – Krupka, Mědník and – as one part – Abertamy, Boží Dar and Horní Blatná. You can find nature trails, accessible mining tunnels or mining museums.

Cyclists will also find outstanding terrain in the Ore Mountains. Highlights to enjoy by bike include the Klínovec Trail Park, an area of brilliant forest trails accessible by chairlift and suitable for all ages and abilities, the Klíny Sport Area, which also features a bike park with outstanding singletrack to explore, plus a climbing wall, rope park and bobsleigh track, and the new Stoneman Miriquidi MTB route, which spans 162 km, two countries, and nine summits. 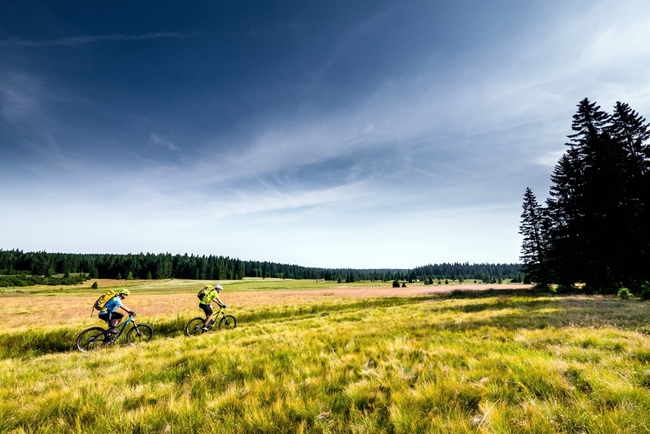 Not to mention the Ore Mountains Road which is perfect for road cyclists. All across this beautiful mountain region and connecting with German cycle routes across the border, 600 km of cycle trails are on offer.

Whether you’re hiking the ridgeway that runs along the border between the Czech Republic and Germany, conquering the Stonemann Miriquidi with a mountain bike, or enjoying a ride powered by steam, this region will open up completely new perspectives. 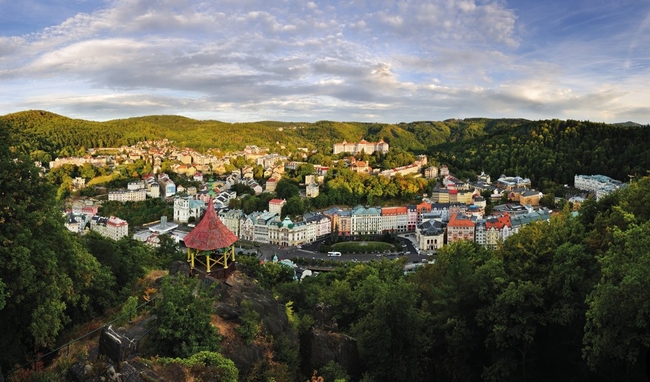 Lying in the western part of the Czech Republic at the confluence of the rivers Teplá and Ohře (Eger), about 120 km from Prague, Karlovy Very is the largest and most famous spa town in the country.

With thick forest and scenic hills surrounding the town, there are many walks criss-crossing the countryside, punctuated with monuments, follies, gazebos and lookout spots. Roam these woods and you are following paths travelled by famous names such as Peter the Great, Beethoven, Goethe and Karl Marx.

One of the most popular walks is to the Diana Lookout Tower. From here, many marked trails fan out to arbours and gazebos offering beautiful views of Karlovy Vary, or to Jelení skok (Deer Leap), as well as many other memorials.

Many visitors choose to take the five-minute ride up to Diana on the funicular and walk back to town. If you’re feeling energetic, it’s a 15km hike on a blue-marked trail via the Diana Lookout Tower and along the Ohřě River to the romantic castle and village of Loket.

Cyclists will find no shortage of areas to tackle on two wheels here either. The ‘Karlova stezka’ or ‘Charles Trail’ is a 160 km path covers varying terrain and is best suited to mountain bikes. There is also a railway that runs along the same route, making it easy to combine parts of the tour with train rides. 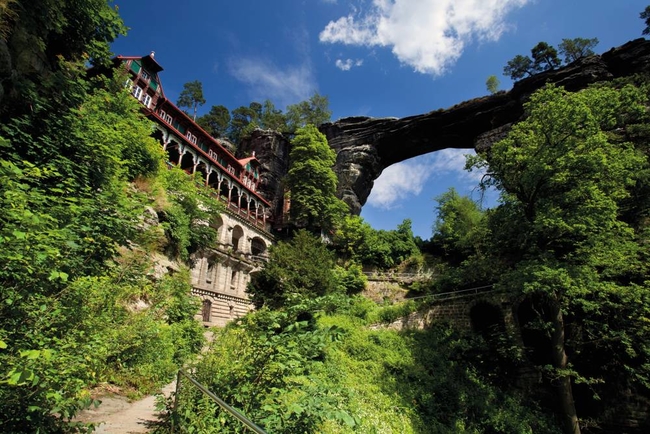 The unique landscape of the Bohemian Switzerland National Park is a highlight of this area. Rock towns, rivers, gorges and deep forests lace the national parkland.

The Kamenice River winds slowly through the Jetrichovice walls between the peaks and viewpoints. Folk architecture illustrates the life of its inhabitants. The half-timbered houses that you find in every village have become the symbol of the whole area. Along the magical river of Suchá Kamenice go from Chřibská to the historic town of Česká Kamenice.

The lower course of the Ohře River features four beautiful royal cities next to each other: Klášterec nad Ohří, Kadaň, Žatec and Louny. This is fertile terrain for growing hops, and the area’s brewing heritage is widely celebrated in Žatec and at Dočesná, where you can visit the Temple of Hop and Beer or the Museum of Hop Growing – including tastings, of course! Here too, visit the Louny Hills, dominating the city’s surroundings, along with the paragliding fortress of Raná. 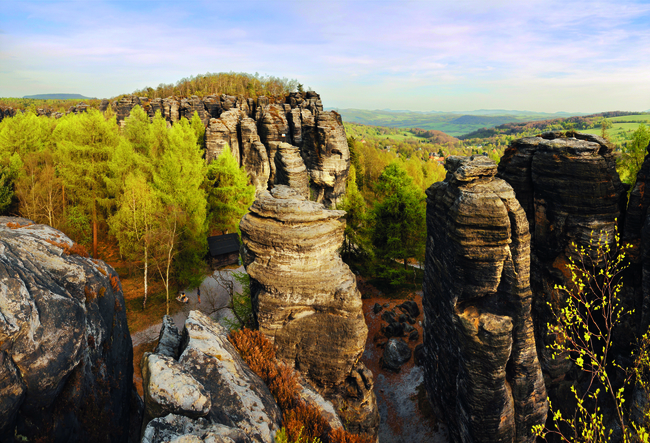 This national park is also a great starting point got loads of bike routes throughout the region. Cycle the trail from Gabrielina to Pravčická Gate and follow the Kamenice River through the wonderful landscapes, taking in high viewpoints and panoramic views. You can also set off on the Elbe Cycle Path or the Ploučnice Cycle Trail and meander through the countryside on two wheels.