From its medieval gems to its breathtaking views over the Bernese Alps, from its historic traditions to its vibrant café culture, Bern is perfect for discerning travellers.

Wander around the beautiful sandstone buildings of Bern’s picturesque, medieval Old Town and it’s hard to believe that this fantastically historic city is also the capital of modern Switzerland.

Virtually no other city has preserved its historic features in the way that Bern has. And happily for the visitor, the architectural treasures of the compact old town, framed on three sides by the River Aare, and a protected UNESCO World Heritage Site since 1983, are easily explored on foot.

Indeed, the lively alleyways and 6km of medieval arcades with their welcoming cafés are a major part of Bern’s cosmopolitan charm. On many of the streets you’ll find further reminders of Bern’s historic past in the form of elaborate Renaissance fountains. 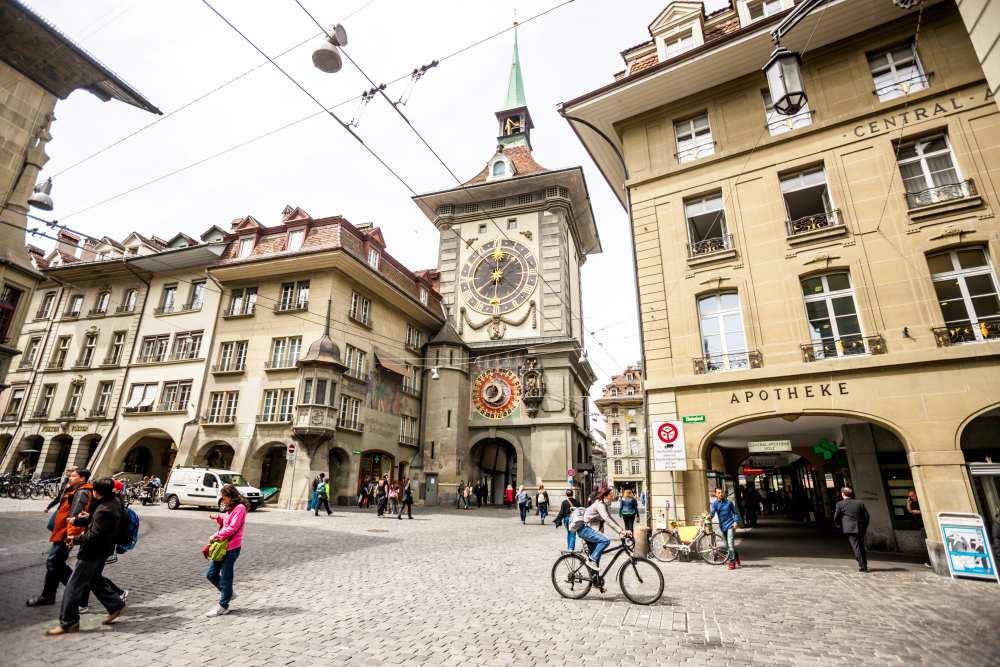 Start with the Parliament Building and Parliament Square (Bundesplatz), which has a sparkling summer water feature. Move on to Bern’s 800-year-old landmark Clock Tower (Zytglogge), with its revolving figures, and fortify yourself with a coffee in one of the countless charming cafés before climbing the 344 steps to the high point of the impressive spire of the Gothic minster – it’s the highest in Switzerland and the views over the rooftops of Bern are well worth the effort.

For something less strenuous, visit the Bear Park (the bear is the much-loved symbol of Bern), or take in one of the city’s world-class museums, galleries and gardens. Albert Einstein lived in Bern from 1903 to 1905, and developed his Theory of Relativity here – and you can find out about his life and work in the Einstein House. 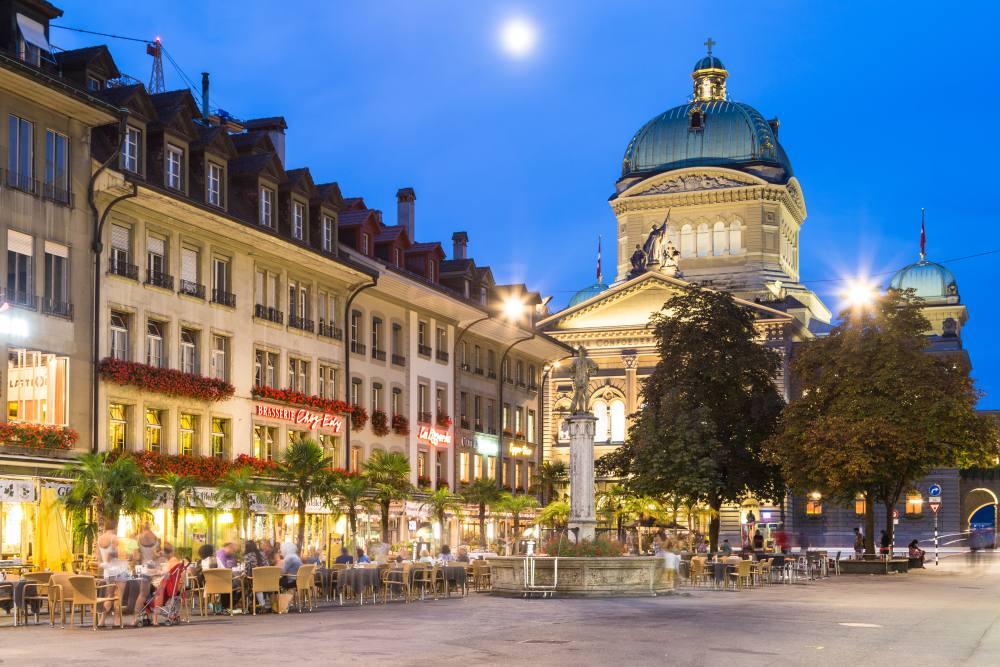 If you look beyond the city borders, the regions of Emmental, Gantrisch Nature Park, Oberaargau and Laupen are just waiting to be discovered on two wheels with their charming, undulating landscapes, ancestral palaces, typical Bernese farmhouses, and world-renowned regional products such as Emmental cheese. 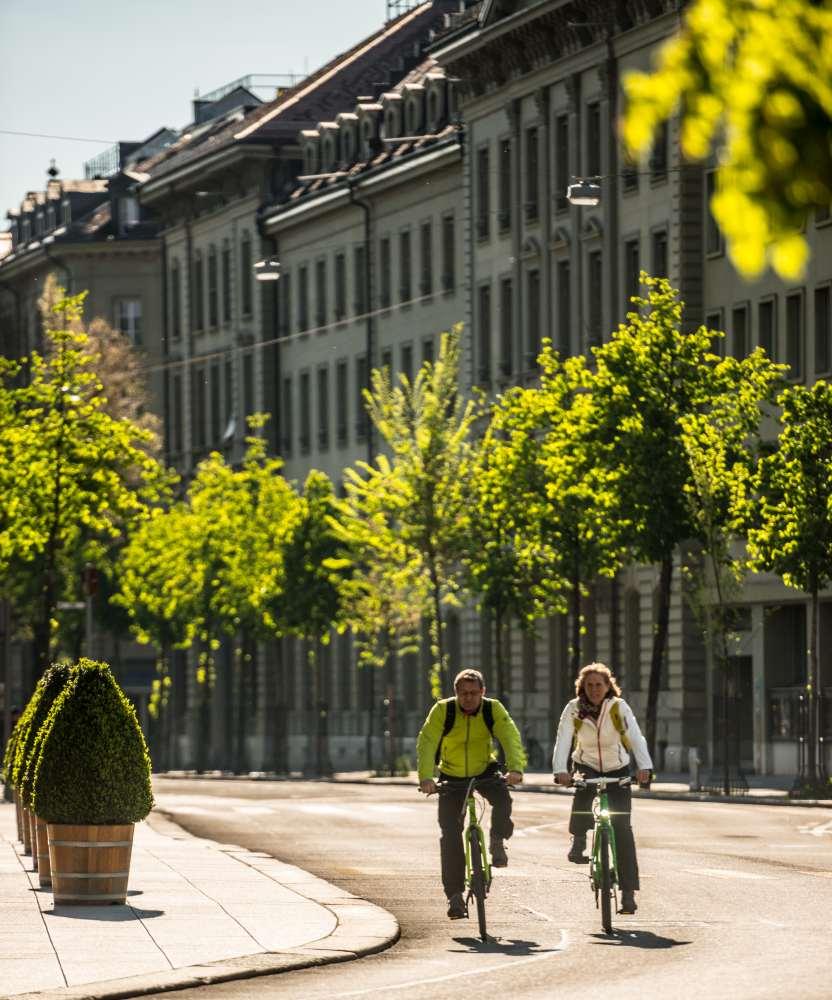 The Swiss capital is a very bike-friendly centre and there are many scenic routes around the city to explore.

This tour lets you pedal your way along relaxing paths through the Aaretal and Gürbetal – both shaped by the Ice Age – and along the Längenberg and Belpberg moraines with fantastic views of the Prealps and the Alpine chain. Highlights include numerous castles. On your way back, a visit to the Zoological Garden Dählhölzli with its more than 200 species of animals is a real treat.

Something with a bit more bite. This is actually stage two of the two-stage Gürbe–Sense route that starts in Thun, the first stage being an easy/medium roll to Bern. Stretch two is a perspiring pedal over the gentle crest of the Längenberg, with spectacular views of the Alps, large, well-to-do farmsteads, a deep and steep landscape, the wild, foaming Schwarzwasser, and the tamed Sense remaining in its bed. 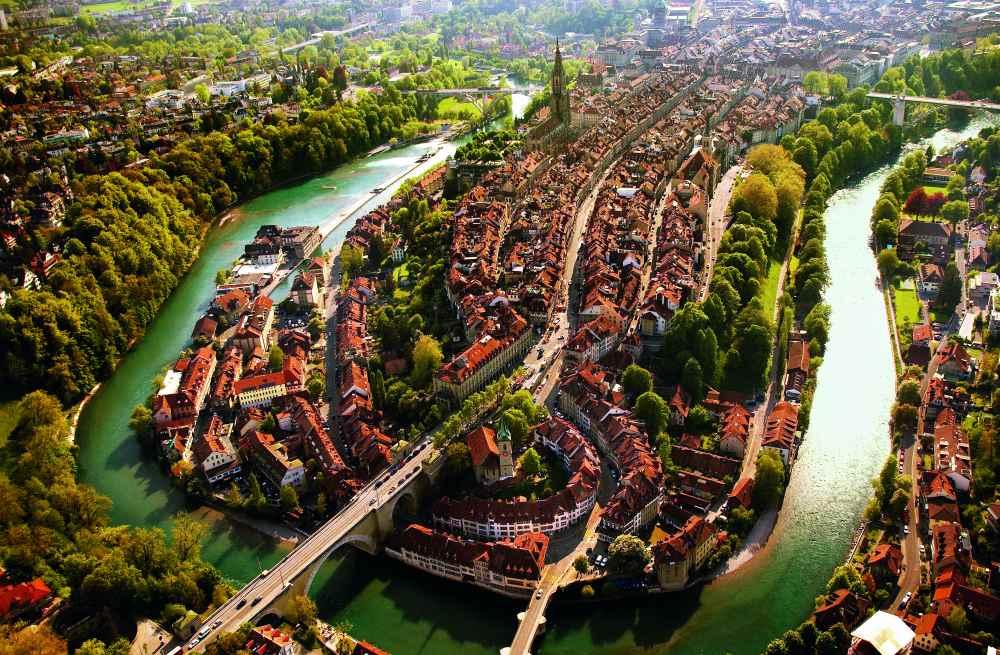 This tour takes you to Laupen over gentle hills and on interesting paths along the Wohlensee, one of the most beautiful and popular recreational areas around Bern. The medieval centre of Laupen is picturesque with 11th century houses and covered arcades. Don’t miss the magnificent castle and the nearby Café am Kreuzplatz.

More details of all Bern routes at veloland.ch

5 Reasons to cycle in Bern

6 of the Best Beds for Bikers

6 of the best road rides